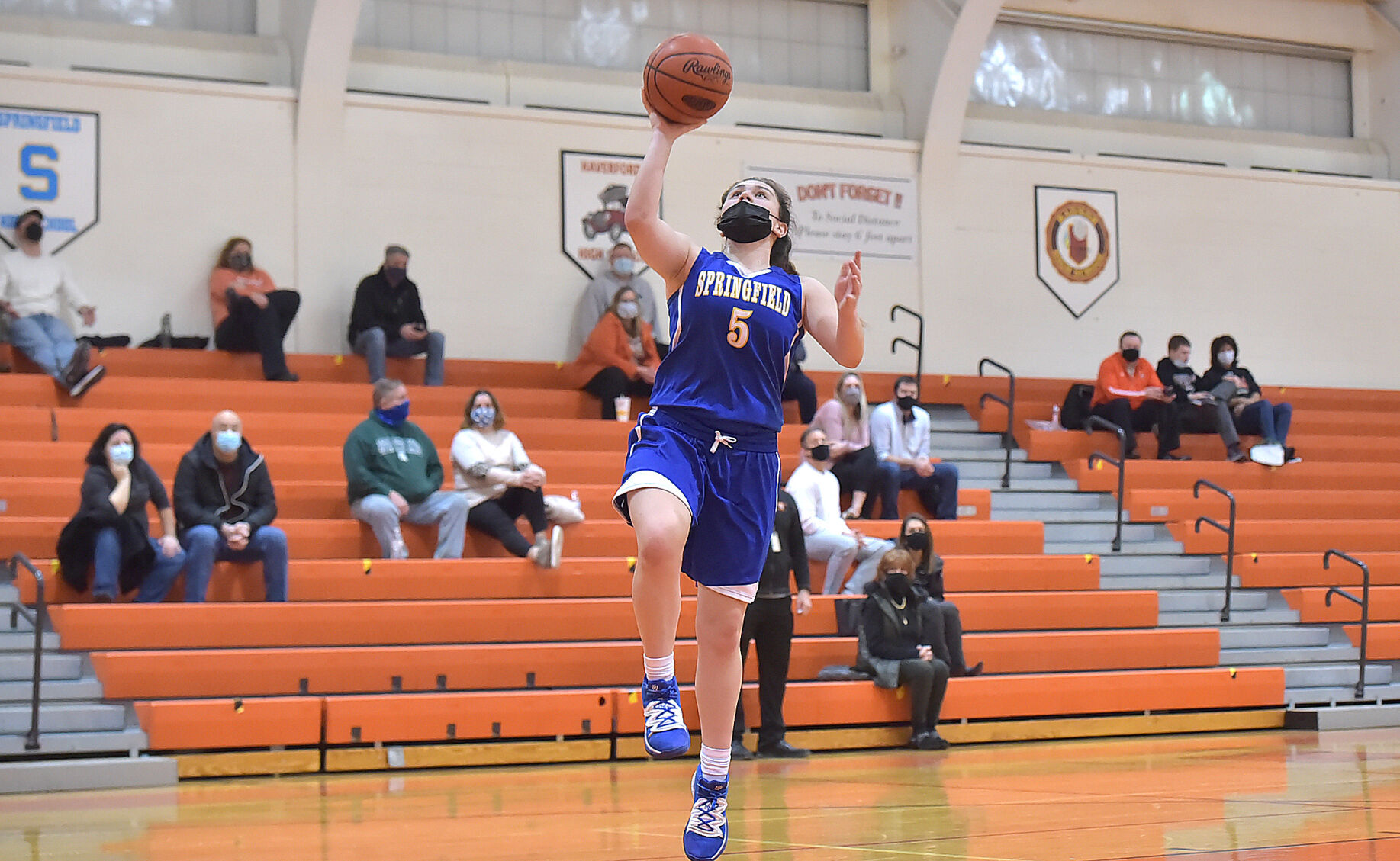 NEWTOWN SQUARE – Anabel Kreydt is one of a handful of sophomores Springfield is expecting big things from this season.

After seeing limited varsity minutes as a frosh, Kreydt was in coach Ky McNichol’s starting lineup for the Cougars’ season opener at Marple Newtown Tuesday night.

Kreydt’s job is to provide tough defense and rebounding against bigger players. She was tasked with boxing out and defending Marple Newtown center Mackenzie Hilden, the tallest player on the floor, and Kreydt stood firm.

She was excellent on the defensive end.

“It felt good to be in and just contribute to the team,” Kreydt said. “I know I have to rebound a lot and play (good) defense.”

All-Delco senior guard Alexa Abbonizio poured in a game-high 23 points to lead Springfield to a 48-40 victory.

Last year it was Lexi Aaron and Mia Valerio who gained valuable varsity experience as freshmen. Aaron sank a pair of 3-pointers and finished with 10 points in a starting role, Valerio had a pair of steals off the bench, and Kreydt supplied five rebounds, four blocks and one steal.

“Having that experience is the biggest thing for them,” said Abbonizio, who netted 10 points in the fourth quarter and shot 11 of 14 from the free-throw line. “Mia is probably the best defender we have … and she can drive in the open lane. Lexi, she’s really good on defense, too, but she can also shoot the ball. They’re all really good for us.”

Springfield’s Anabel Kreydt, right, drives on Marple Newtown’s Mackenzie Hilden Tuesday night in the season opener for both teams. Kreydt came up big in the 48-40 win for the Cougars. (PETE BANNAN – MEDIANEWS GROUP)

The defending District 1 Class 5A champions were one of the final Delco girls basketball teams in action before the coronavirus pandemic suspended state tournament competition in March. The Cougars saw their 2019-20 season end in the quarterfinal round of the state tournament. Ten months later, they are happy to be back on the floor, competing with masks and following social distancing protocols while on the bench.

“This game, it was about taking one step at time,” Abbonizio said. “Our last game was in the middle of March of last year (in the PIAA Class 5A tournament). I think this was a great game to start off with. Marple is a great team and it was a great team win. One person couldn’t do it, it was a team effort tonight.”

This Central League season technically begins week of Jan. 22, when every team is cleared to play after holding mandatory 10 practices. Until then, all games between Central League teams count toward overall records as well as District 1 playoff rankings. The Central League is slated to play an 11-game regular season followed by a postseason tournament prior to the start of district playoffs.

Marple Newtown’s (15) Haley Levy puts a shot up in the first quarter against Springfield in the opener of the Central League season.

The Tigers kept it close for most of the game. Haley Levy accounted for 14 of her team-high 18 points in the second half. Springfield led by as many as 11 points in the fourth quarter, but the Tigers cut their deficit to six points with 2:15 to play, thanks to a Brooke Impriano (seven points) bucket. But Abbonizio hit six straight free throws to extend Springfield’s advantage to 10 points in the final 90 seconds of regulation.

“We’re definitely grateful for every opportunity we get to step on the floor right now,” Springfield coach Ky McNichol said. “We talk with the kids every day about cherishing the moments you have with your teammates and appreciate the little moments that could turn into big moments down the road because you never know what could happen in this crazy year.  We’re just thankful … and to actually get to play a game tonight was a really great feeling for the kids, the coaching staff and the whole Springfield community. Everyone was pumped up to actually see the girls back in action and be able to play.”