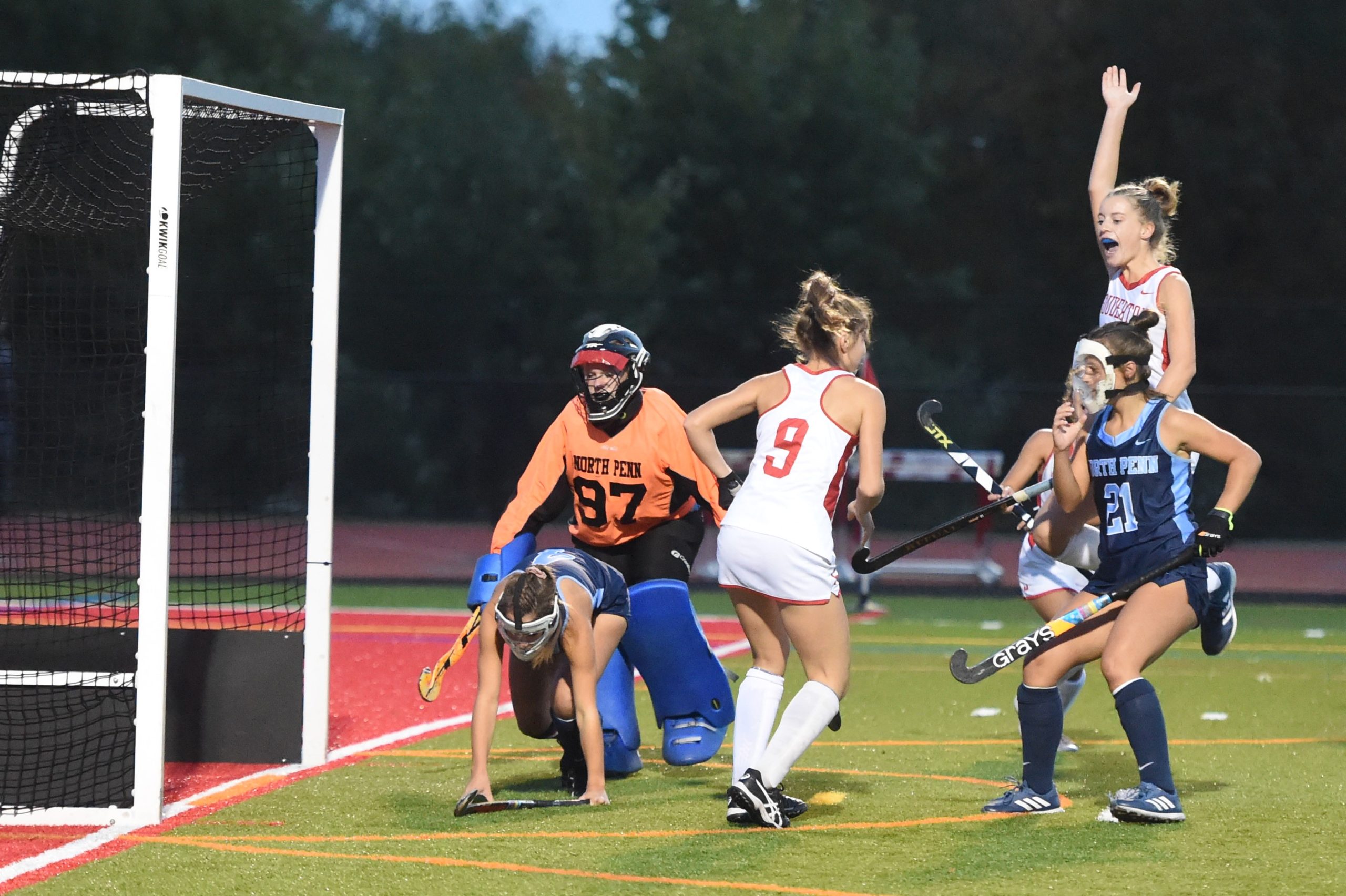 Souderton's Ava Jones (12) leaps up in excitement after a goal by Ang Borisow (9) in the first quarter against North Penn on Wednesday, Oct. 12, 2022. (Mike Cabrey/MediaNews Group)

FRANCONIA >> Ang Borisow was at the right place at the right time to help the Souderton field hockey team get off to a quick start Wednesday night.

After a ball from Lauren Frye on a penalty corner sailed through the air and hit off the cage’s right post, Borisow was in prime position in front to knock it in for a 1-0 Indians lead less than three minutes into their SOL Colonial Division matchup with North Penn.

“Scoring goals, it doesn’t always end up being your goal cause someone tips it and stuff,” she said. “And I know the goal I scored first was Lauren Frye’s initial shot so it was just I happened to be there and touch it in. So credit to Lauren for shooting that but I was able to touch it into the goal. It’s a whole team effort, it’s not just me.”

Borisow, a Rider commit, put herself in another fortuitous spot to double the lead before Ava Jones struck after a corner to give Souderton a 3-0 advantage at the end of the first quarter. Jones went on to add two more goals to finish with a hat trick as the Indians rolled to their fourth straight win, topping the visiting Knights 5-1.

“We’ve been trying to like ‘Hey first five,’ let them know we’re here to play,” Souderton coach Sue Casciato said. “I think the thing that really stood out tonight was our passing. Even the official said ‘Oh my God, it was a beautiful game to officiate, your girls moved the ball so well.’ So that’s a compliment cause we’re always preaching team hockey and whatnot.

“We’ve been a little flat the last few games so it was nice to have this effort as we’re kind of winding down and got a couple big games coming up.”

“Defensively we had a rough day on Monday, we played a lot of defense on Monday then came right into the game started playing a lot of defense,” Knights coach Shannon McCracken said. “I know I feel like my defense is a little tired, beat up a little bit but they played hard and continued to push through.”

Souderton’s Ava Jones (12) scores in the foruth quarter for her third goal against North Penn during their game on Wednesday, Oct. 12, 2022. (Mike Cabrey/MediaNews Group)

North Penn scored the lone goal in the third on Laura Albert’s penalty stroke but in the fourth Jones ripped a shot in off an Olivia Nogami assist.

“I think we did a better job in the second half but it’s a little too late when you’re down 4-0. It’s a hard one to come back from.”

FIELD HOCKEY: 1:32 1Q Souderton 3, North Penn 1. Indians keep the ball in the circle after a corner and eventually Ava Jones lifts a shot into the cage. pic.twitter.com/NfYdjiRh5n

Souderton can clinch at least a share of the SOL Colonial title Friday when it visits Central Bucks East at 3 p.m.

The Indians – who went undefeated in winning the division outright last year – sit in first place with 42 points while Central Bucks West is second (12-1-0, 36 points). Souderton, third in the District 1-3A rankings, hosts West in its regular-season finale 7 p.m. Tuesday.

“It’s a hard week cause in this league on any given night the teams are all so equal,” Casciato said. “So I said we’re trying really hard not to look too far ahead, we just have to tick one game off at a time.”

North Penn, 21st in the district rankings – 24 teams make the 3A playoff field – has a road contest with Central Bucks South 3:30 p.m. Friday then is home against CB East 7 p.m. Tuesday.

“As I’ve said before our conference is incredibly tough and to play West and Souderton back to back was definitely going to be a challenge for my team,” McCracken said. “But hopefully we got better from Monday and so hopefully Friday we’ll just see South again and I know that they’ve improved and we’re excited to go there and hopefully get a win.”

Borisow made it 2-0 Souderton a little more than four minutes after her first goal at 12:45 as an attempt at a clearance kick by the goalie instead went to Borisow, who sent a shot in at 8:37 in the first quarter.

“I was going to pass it probably back in but no one ended up coming onto me,” Borisow said. “So I decided to shoot it and drive it since I had time.”

The Indians collected their third goal on a corner late in the first quarter.

Borisow’s shot from the right side of the circle was kick-saved by Holt. A second try by Borisow was blocked but she collected the ball and sent it down to Jones, who flicked a shot that Holt denied. The Indians, however, kept pressuring in front and eventually from a crowd Jones lifted a shot that went in at 1:32.

Souderton’s Ava Jones (12) celebrates after her goal against North Penn during the second quarter of their game on Wednesday, Oct. 12, 2022. (Mike Cabrey/MediaNews Group)

“I feel like the energy from Senior Night was still here,” Borisow said. “I feel like we always have a lot of energy on Senior Night just because it’s a huge night for all the seniors and we had a lot of seniors this year. This is all of our seniors’ last time playing North Penn at our home field so I think we really wanted to beat ‘em this time.”

Jones extended Souderton’s lead to 4-0 with her second goal, getting a bit of space in the circle and lacing a shot into the cage with 1:32 left before halftime.

Albert pulled the Knights to within 4-1 as she converted on a penalty stroke at 2:42 in the third.

“That stroke was great,” McCracken said. “Beautiful. She got the goalie moving and then went opposite on her so that was nice.”

Jones completed her hat trick in the fourth with a goal from the middle of the circle with 8:15 remaining.