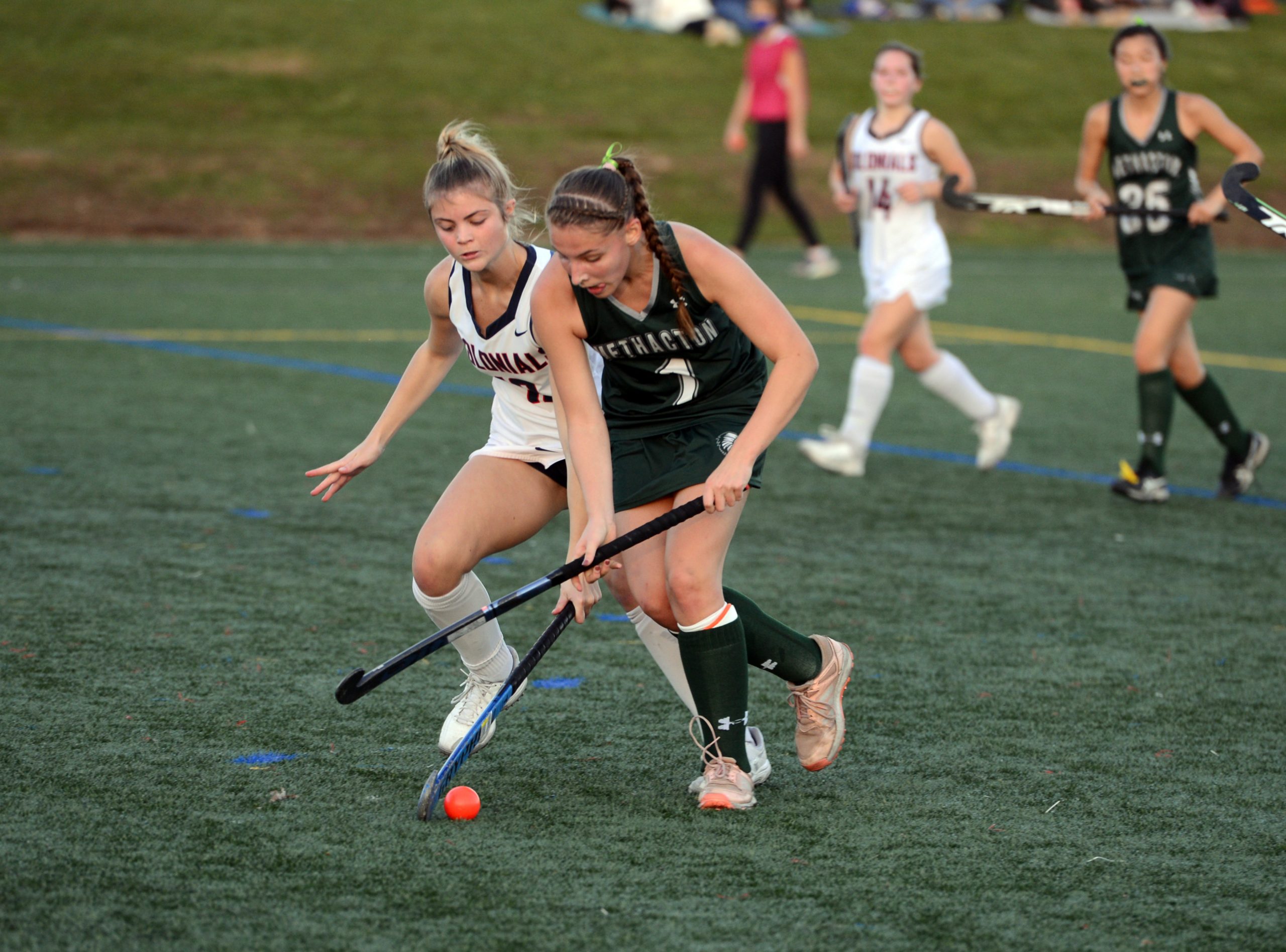 Elena Snodgrass, right, scored the game-winner for Methacton in a 2-1 win over North Penn in a District 1-3A second round game on Oct. 27. (MNG file)

FAIRVIEW VILLAGE >> It was as close to an overtime situation a team could be without actually having to play overtime.

That fact pleased Methacton no end Wednesday. Not as much, though, as the final result: A 2-1 victory over North Penn in a second-round District 1-AAA playoff game at the Warriors’ home stadium.

Methacton and its Suburban One League neighbors went into the final half-minute of play tied 1-1, with the Warriors getting a corner opportunity as the time moved toward zero. The clock ran out while the teams played the corner out, but Methacton got another corner call.

In that instance, it produced the game-deciding score. Elena Snodgrass took the pass and shot toward the cage. The ball went off a North Penn defender’s stick and went into the air, hitting paydirt in the upper right-hand corner of the net.

“We didn’t want to go OT,” Snodgrass said. “It was great it got done.”

A moment that took only a couple seconds led to a longer-lasting future for Methacton (16-3). The district’s sixth seed will now play Wissahickon in a quarterfinal-round game Friday, with the winner assured a spot in the PIAA 3A playoffs one week later.

“It was as close as you could get (to overtime),” Methacton head coach Amanda Fuertsch agreed, “but we didn’t want to.”

This rematch of neighboring schools — they opened the season at North Penn Sept. 3, with the Maidens (12-6-1) posting a 2-1 victory — was expected to be as even a matchup as the first. It played out that way, Methacton scoring 30 seconds in and North Penn pulling even with 47 seconds left in the third quarter.

“We did our homework on North Penn,” Fuertsch said. “We both wanted it badly. Whoever made the fewer mistakes was going to win.”

Both teams’ defenses were stout the entire way, stopping their opponents’ various drives and corner shots. The Warriors, who were the Pioneer Athletic Conference’s Liberty Division regular-season champions and a playoff semifinalist, got nine-save goaltending from Gaby DiPrinzio while NP’s goalie, Kiera Holt, had six stops.

The one that got by, though, was confirmed to not be a routine shot.

“It was a heartbreaker,” North Penn head coach Shannon McCracken said. “Any time it goes in the air, it’s unpredictable.

“Both goalies had great nights,” she added. “Kudos to both teams.”

The Warriors’ first-strike capability came from Sammy Fuchs, who connected at the 14:30 mark. From there, the Methacton defense held the Maidens at bay until Catherine McGeehan punched the ball through a bunch of players from both teams fighting for possession in front of the cage.

“I think the reason for the early goal was our effort,” Snodgrass said. “The way we came out caught them by surprise. Once they settled in, it was easier to defend us. They got locked in.”

“They had us on our heels,” McCracken admitted, “but we started back.”

Both teams went one player down over a 7½ minute span of the final stanza, drawing five-minute penalties. NP went a player down at the 8:33 mark, and Methacton at 6:06, leaving them going 9 vs. 9 for about 2½ minutes.

“You just maneuver people around to fill the spots,” Fuertsch explained. “On defense, you have to be more patient.”

Both teams got corners during their respective player-advantage situations. North Penn’s corner came with 2:06 left, and it got off another shot at 1;39 before Methacton returned to full status.

“Our girls played with heart, hustle and to the end,” McCracken noted. “I couldn’t be prouder of them.”

For Methacton, the opportunity to make up for its league-playoff loss is a big one.

“We were disappointed we lost in the semis,” Snodgrass said. “The PAC semi motivated us to keep going.

“We feel we have a solid shot to win districts. We just have to stay focused.”

NOTES >> North Penn came into districts as the 11th seed. It handled Haverford in the opening round, 8-2. … Snodgrass on the significance of Methacton’s early-game goal: “it was good insurance. It got us calmed down and made us realize we had to stay composed.”