Ciancio scores twice as Haverford holds on to win 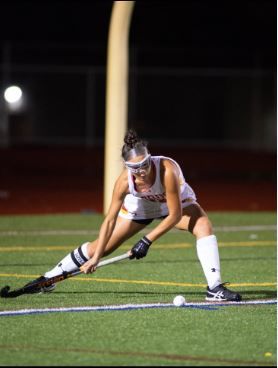 Haverford's Mia Ciancio, in action against Lower Merion earlier this season, scored both goals to lead the Fords to a 2-1 victory over Avon Grove Monday in the opening round of the District 1 Class 3A field hockey tournament.

After nine games, the Fords were three games under .500 and struggling.

Part of it was the schedule. Their six losses were to teams that all made the District 1 playoffs, Garnet Valley, Plymouth Whitemarsh and Conestoga in Class 3A and Radnor, Bishop Shanahan and Merion Mercy in Class 2A.

Garnet Valley and PW are the top two seeds in Class 3A, and Radnor and Bishop Shanahan are Nos. 1-2 in Class 2A.

An inability to finish was another part of the problem. While they had plenty of opportunities, according to head coach Christa Taylor, the Fords had trouble finding the back of the cage. Haverford only scored five times in those six losses, while giving up 15 goals.

Since then, however, the 12th-seeded Fords have been on fire. They’ve won nine of their last 10 games, including Monday’s thrilling 2-1 triumph over Avon Grove at A.G. Cornog Stadium in the opening round of the District 1 Class 3A playoffs.

The only loss in that second-half stretch was a 2-0 setback to Mount St. Joseph, which qualified for the Class 2A tournament so all of Haverford’s losses have been to playoff teams. More importantly, they’ve outscored the opposition, 34-4, over the last 10 games and posted six shutouts.

“I think our connection on passing has really improved,” senior Shannon Quaile said.

That wasn’t the only improvement.

“We played too much as individuals,” Quaile said. “We tried to dribble by ourselves, but once we started connecting the ball and making passes, we got up the field a lot more.”

Improved communication, from the goal on out, has also aided in the turnaround.

“It’s been a point of emphasis for us to talk from the backfield,” Taylor said. “I still have to get my lines in front to listen. That’s hard, but I think we’re doing a better job of communicating.”

It helps to have a back line that can push the ball forward the way the Fords (12-7) do. Cianco, Quaile, Leah Drake, Ella VanLuvender and Sophia Conners consistently pressed the attack and that paid off in 12 corners for the Fords.

“We emphasize that a lot in practice,” Ciancio said. “We don’t want to be playing defensively. We want to attack and keep it as high as we can.”

“Shannon can provide us that long ball from the outside and Leah can kind of wiggle through people a little bit,” Taylor said. “Both of them have really good passing skills. They feed the ball very well out of the center, but also do a nice job defensively blocking up the center. It’s nice to have that flexibility with our personnel.”

Ciancio, who plays left back and also is the insert on corners, scored both goals for the Fords. Quaile, who rotated between center-back and center-midfield with Drake, had the assist on Ciancio’s winner with 17:31 to play in the game.

“I don’t score much,” Ciancio said. “The only time I score is on corners because I play defense. I sneak in and try to get on post so I can tip.”

Ciancio did that twice. She scored both Haverford goals off corners by sneaking in behind the defense and waiting for an opportunity to pounce. The first chance came with 18:04 left in the first half when she put home a rebound to give the Fords a 1-0 lead. Ciancio then tipped in a Quaile shot to break a 1-1 deadlock.

“Our backs are strong,” Taylor said. “They come up real high and because we pressure high, we encourage the back line to come up and we have speed so we don’t worry about recovering. Sometimes that gets us. If another team gets a fast break we have to be careful and we have to watch for that.”

Haverford needed that strong back line play and a big save from goalie Jenna Cirillo with time winding down to foil Avon Grove’s upset bid. The Red Devils (8-10-1) dropped a 3-1 decision to the Fords 16 days ago, but were determined to avenge that loss.

“We knew there was more pressure on them because they’re the higher seed and they already beat us,” Avon Grove senior Alexis Barnhart said. “We were the underdog and we had a lot of confidence coming into the game. We left it all out there on the field.”

Barnhart converted a pass from junior Lila McCulley with 2:52 left in the first half and Culley nearly got the equalizer with just seconds left on the clock. McCulley got behind the Haverford defense, but Cirillo made her only save of the day to send the Fords into Wednesday’s second round against fifth-seed Central Bucks East (3:30 p.m.).

“It was crazy,” Ciancio said. “I think as a team we played really well. Our execution on corners really helped us. There were a few scares in the backfield, but we were able to come away with the win.”