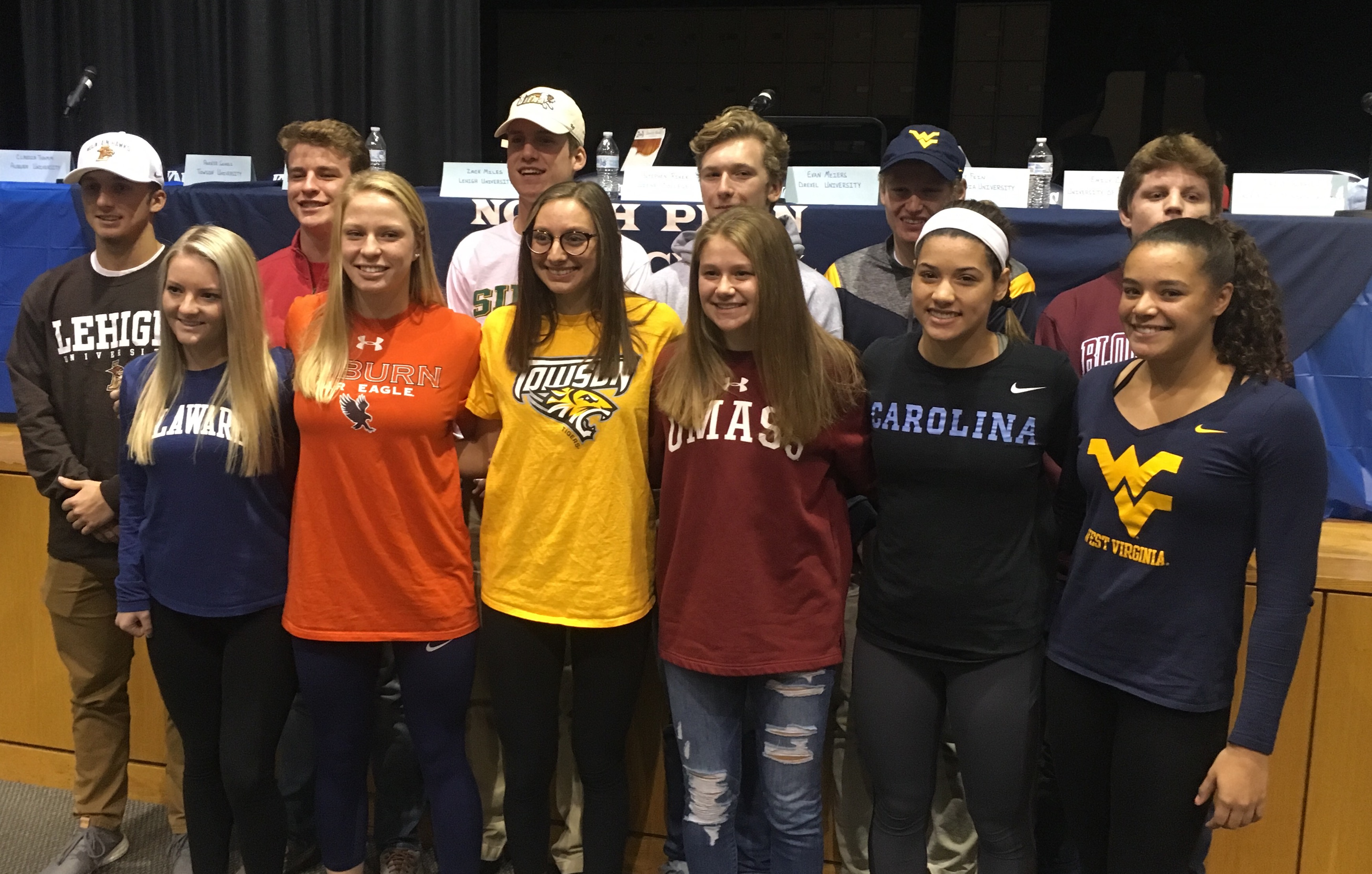 TOWAMENCIN >> “Memory Lane” had some traffic on Thursday morning, as 12 of the area’s finest student athletes were asked to recall their favorite sports moment during their distinguished careers at North Penn.

“My favorite memory would be winning my regional semifinal match because I finally achieved my goal of going to states,” wrestler Pat O’Neill said. “And it was one of the first times I ever cried from being so happy.”

“I remember coming back to beat (Lansdale Catholic), we were losing 3-0 the whole game,” soccer standout Lauren Ruth said. “And we came back to beat them in the pouring rain. It was just a good experience for everyone on the team.”

State titles — in both swimming and water polo — became a constant for Claudia Thamm. The first one was sweetest.

“As a freshman, you feel so little, so to be part of something that big is just an amazing feeling,” she said.

North Penn’s impressive dozen all enjoyed a bit of reminiscing while also looking to the future, as they each signed letters of intent to their respective colleges for next year.

O’Neill will wrestle at Bloomsburg University, Ruth will play soccer at The University of Delaware, and Thamm — joined by two other North Penn swimmers on the stage Thursday — will head to Auburn.

“Claudia is one of the top female athletes who ever graced the pool at North Penn — both in swimming and water polo,” Knights coach Jeff Faikish said.

“She brings that enthusiasm with her whenever she races.”

Schulz called the race “the biggest rush of (her) life.”

“When I got down there, I just felt welcome right away,” Fein said. “I kinda knew it was gonna be a good fit for me.”

On the lacrosse field and in the weight room, Ryan Schoppe is that “that blue-collar kind of guy,” coach Rick Smith said. “He just works and works and works…”

Schoppe will take that work ethic with him to The University of Tampa while teammate Stephen Rinck takes his lacrosse stick with him to Siena College.

“The campus is awesome,” Rinck said. “The coaches are great and I like the area — it’s right near Albany so that’s always good. I found a home and I’m happy.”

For all the athletes present, Thursday marked the completion of a long journey.

“(Freshman year) was really scary for me because I was so much smaller than everybody,” remembers Zack Miles, “and everybody just supported me with everything.”

Miles will play baseball at Lehigh University next year. His teammate, Jake Drelick, could not be at the ceremony on Thursday but is headed to Jefferson University.

Emily Crawford will travel north to play field hockey at UMass, having enjoyed being part of a tight-knit group at North Penn.

“I remember Senior Night, scoring the game-winning goal with a minute and 30 seconds left. All of my best friends are seniors and they all hugged me after the game,” she said with a smile.

A trio of North Penn divers will all compete on the next level: Kianna Yancey will be at West Virginia University for gymnastics; Paige Burrell will dive at North Carolina, and Evan Meiers will be up on the board at Drexel University.

“I can’t wait to be at West Virginia,” Yancey said eagerly.

Burrell is already a two-time State Champion at NP, with one season to go.

“There is no doubt in my mind,” Knights diving coach Kyle Goldbacher said, “that Paige will one day be an NCAA one-meter National Champion.”