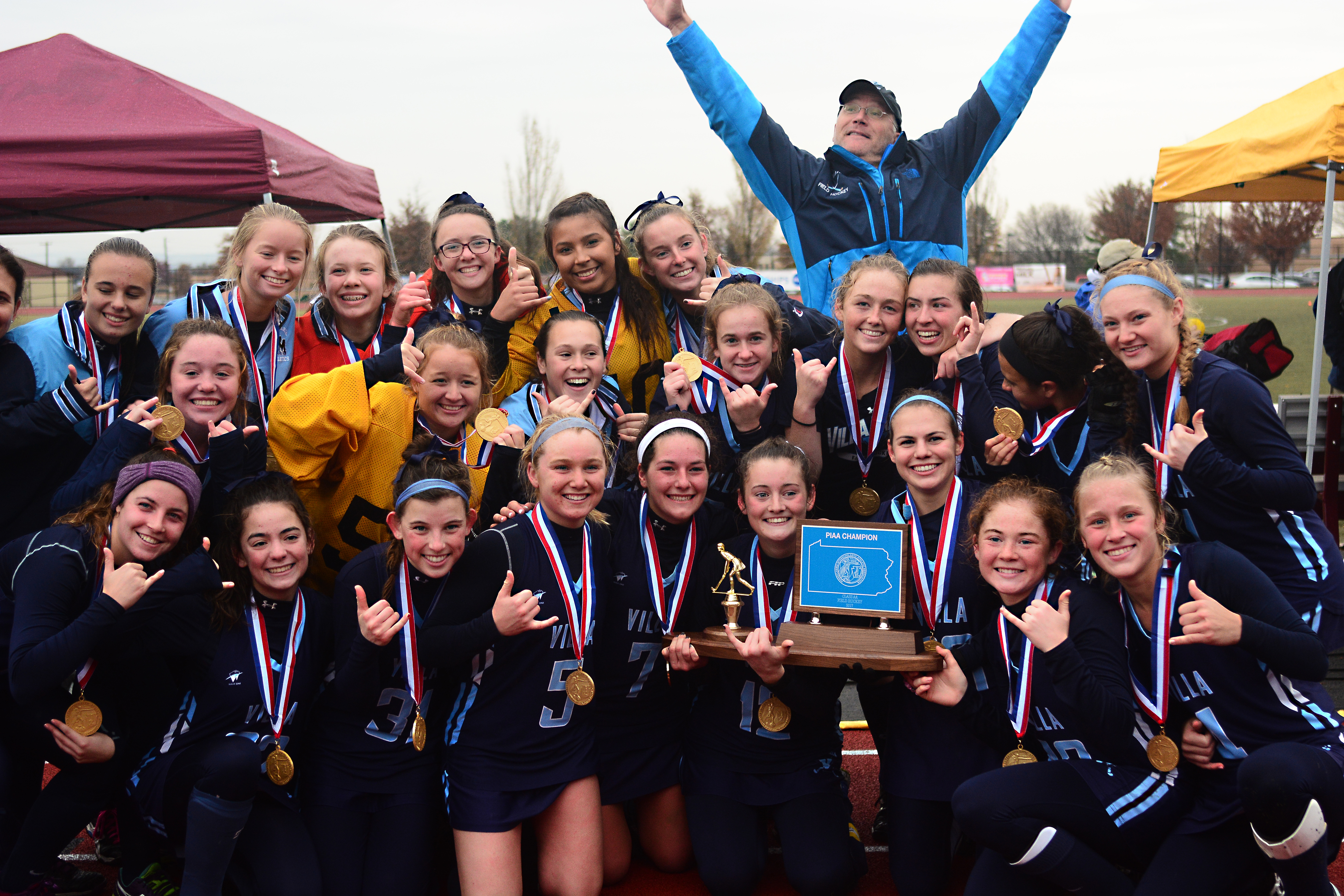 WHITEHALL—Talk about a nice going away present. Villa Maria field hockey coach Daan Polders was roaming the sidelines for his final game leading the Hurricanes Saturday afternoon at the Zephyr Sports Complex at Whitehall-Coplay HS, site of the PIAA Championships.

Daan Polders with some halftime instruction

His players sent him off in grand style, capturing the Class AA state title with a 2-1 victory over Wyoming Valley West (21-4), the District 2 champions. It is Villa’s second state championship in four years under Polders, and third finals appearance.  It is the fourth state championship in program history.

“It’s always a great feeling to win a state championship,” said Polders, who is moving to North Carolina. “And this was a real championship game. I don’t think we played our best game; both teams showed the effects of nerves. Always back and forth and exciting, and we came away on the right side of it.”

As has been par for the course for Villa, who completes their post-season run having outscored opponents 59-3, the Hurricanes jumped out quickly, grabbing a lead barely a minute and a half in.

Adele Iacobucci brought the ball up the right side, and sent it forward to Erin Finley. Finley dribbled a few yards along the edge of the circle, and passed to Hannah Miller, who slammed it home for the score.

“I got the ball from Adele and I kind of swung it around wide, like we’ve been practicing,” said Finley. “I backed up to Hannah and she did what she does. We always try to come out hard right from the start. Getting those early leads is big.”

For much of the first 25-minutes, Valley West rarely got inside the 25, and didn’t get a corner let alone a shot on goal. But just after the clock ticked down past the two minute mark, the Spartans got their first corner of the day, and made good on it, with Karline Stelma getting the goal.

Dani Acuna makes a save for Villa

“We took a time out, just to try to get ourselves settled in,” said Spartan’s coach Linda Fithian. “This was a brand new stage for us. Villa has been here before. We changed a few things and I thought we adjusted well.”

Before Saturday, Villa hadn’t really been tested, but showed they were ready to play when pushed.

“Villa is an excellent team,” said Fithian. “They have great speed and excellent passing, and they have experience in big games. I just hope our younger players use the experience from this year to get hungry for more.”

With Valley West suddenly making a game of it, the Hurricanes’ opportunities became more scattered, and ten minutes of the second half went by before Villa made a real, solid push through the circle. This time, Miller took matters into her own hands, dribbling inside the circle through a crowd before unleashing a wicked backhander past Spartan goalie Nikki Hartzel to give Villa 2-1 lead that would hold up until the end.

“I saw the space, drove with my body to take it,” said Miller. “I originally saw Emily (Doyle) on post and first thought to go to her. But then I saw an opening and just took the shot. When I was here as a freshman we lost. I didn’t want to leave here today without a gold medal around my neck.”

But even up 2-1, Villa couldn’t get comfortable. There was still a lot of time left. And given that Valley West had reached the final game with a game-winning goal in semis with just three second left on the clock, they knew better than anyone that as long as there is time on the clock, there’s life.

Villa, though, thrives on the pressure.

“These close games are always the most fun,” said Miller. “It’s when you really have to work with your team, and we all just love playing with each other. You all know that the end result could be a state title.”

When the clock did finally reach all zeroes, the lead still stood, and the Hurricanes erupted in celebration, with tears of joy streaming down more than a couple cheeks. It was great send-off for both Polders and the graduating seniors on the team.

“This is just amazing to have my senior year end like this,” said Finley. “I’m not playing at the next level, so this was the last field hockey game I’ll ever play. These have been a great four year. We came up as freshmen the same year Daan did, so we’ve never known anything but Daan Polders hockey. These girls are my best friends, and I wouldn’t trade this experience for anything.”