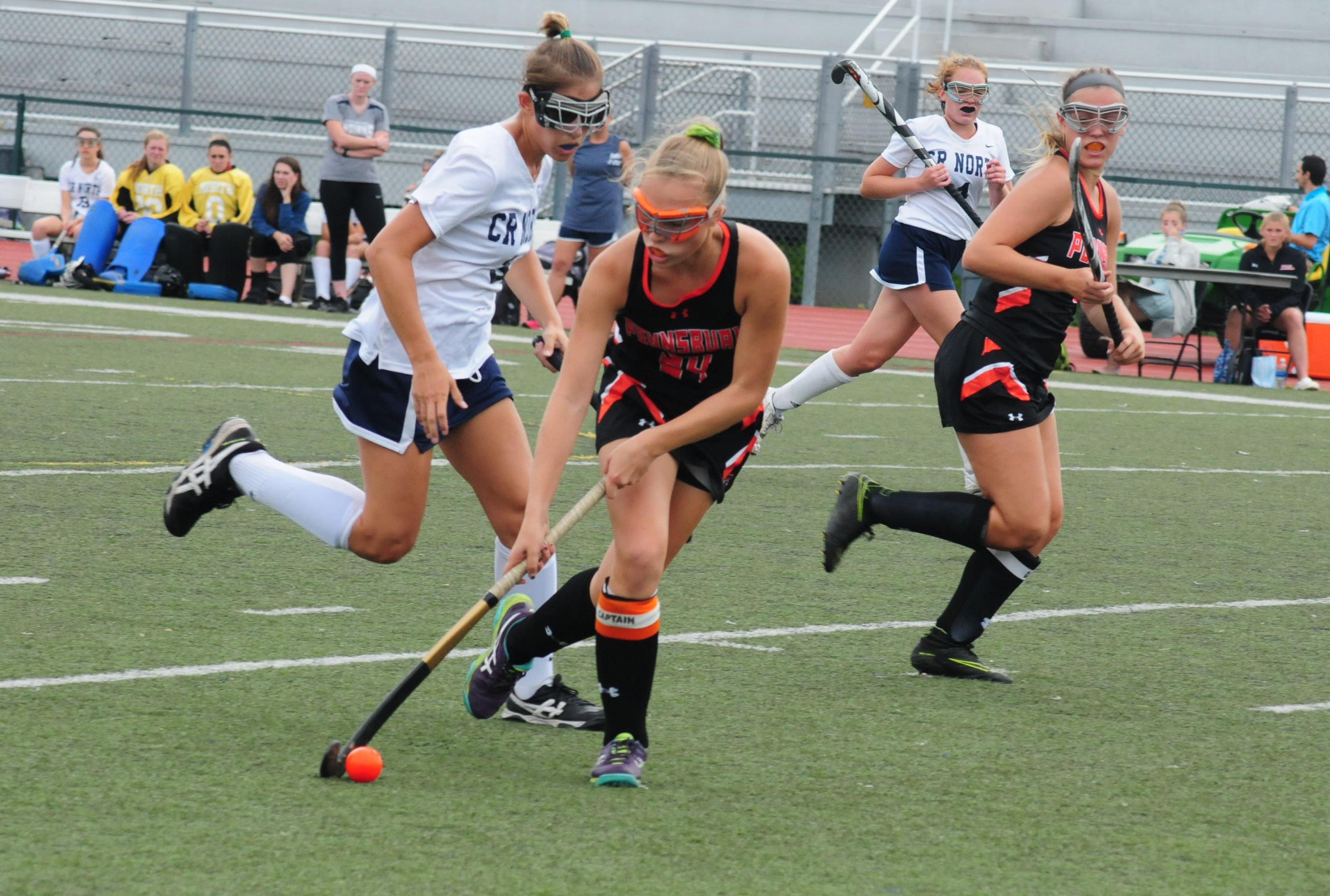 NEWTOWN – In a critical Suburban One National League (SONL) field hockey duel yesterday (Sept. 19) at Council Rock North, Pennsbury had outshot the Lady Indians 10-0 in the first half. And yet the visiting Falcons led the game by a slim 2-0 margin with two minutes remaining in the first half.

With 1:39 to go, Pennsbury junior Maya Geller went out and put her mark on the situation. She intercepted a clearing pass by the Rock then backhanded the ball for her second goal of the contest, putting the Falcons up 3-0 heading into the half.

“We talked about that during the timeout. I said ‘two-nothing is really not comfortable.’ Really, no lead is,” said Pennsbury head coach Jamie Parell. “I said, ‘we need some fire; we need something to pick us up.’

“And she went out and scored. We needed that; that was big.

“It was a turning point.”

Geller wound up with a hat trick, opening the scoring on a penalty corner seven minutes into the contest and closing it out a 5-0 win with a shot she lofted high over the defense and into the cage with just 54 seconds remaining in the second half.

With 12 seniors in the lineup, the Falcons are enjoying a resurgence this season, a year after finishing in fourth place in the SONL. The team is currently ranked fifth on the PIAA District 1-AAA Power Points list.

“We are really playing as a unit, instead of as individuals and we’re not letting up,” said Parell. “Whether we score first or the other team scores first, we don’t give up.

“As you can see today, we had kind of a slow start, a little complacent on the field but we just kept moving and kept having second efforts at putting the ball in the cage.”

Senior Kate Chesney came through with a goal in the first half, just 26:20 into the game and classmate Maddie Hackman scored on a scrum in front of the CR North cage just 5:50 into the second half.

Parell is cautious when it comes to broaching the topic of the Falcons’ current position in the league standings.

“This league is always tough; you can’t take any team lightly and our record means nothing,” the coach said.

“I’m proud of what they’ve done so far and it’s been a while since we’ve been in this position. But I don’t think we really worry about our record. The record doesn’t mean anything; each game is a different day.”

“They are all leaders on and off the field,” said Parell, of her captains. “Nell is committed to Boston and she’s a good talent.”

Peyton Ritchey managed a goal in the second half for Neshaminy but that was all. The 3-1 triumph was the first time the Falcons topped the Skins since 2011.

“Neshaminy is always a big rival. Council Rock – North and South – always has great teams but for some reason, there’s always a fire with Neshaminy.

“There’s a lot of history between us and it’s always good to take a top team down.”

“Neshaminy is always one of those teams that always seem to have our number. It feels good to win, especially since it’s been so many years for us.”

Pennsbury also posted a 3-0 shutout win over CR South Sept. 15 at Walt Snyder Stadium. Senior Sammie Hackman opened the scoring 11 minutes in with Chesney pushing the lead to 2-0 with seven minutes left in the half. Mauro closed out the scoring with a second half goal in the Falcons first win over the Golden Hawks in four years.

“It was definitely a big week for us,” said Parell. “We have a lot of seniors and they’ve really done an awesome job.”

One of those seniors is center backfielder Lily Nolan, who anchors the Pennsbury defense.

“She’s our center-back and she’s our leader in the back,” said Parell. “She’s always talking and she’s always stepping to the ball. She’s a strong defender for us, for sure.”

It was the Falcon midfield however that enabled the visitors to control the tempo of the duel with CR North and prevent the Indians from getting off a shot.

“We weren’t doing a good job of that in the first half and I talked to them about it,” said Parell. “I said, ‘you’re waiting for the ball and you’re very flat-footed.

“You’re letting them receive the ball and then you’re reacting. I told them, ‘that’s not the way we play and they agreed. They picked it up and played much better in the second half than they did in the first half.”

The Falcons started league play with an 8-0 win Sept. 6 at Bensalem and a 6-3 victory over Abington Sept. 8 at home. They also posted a 2-1 triumph in overtime Sept. 11 at SOL Continental Conference rival Souderton.