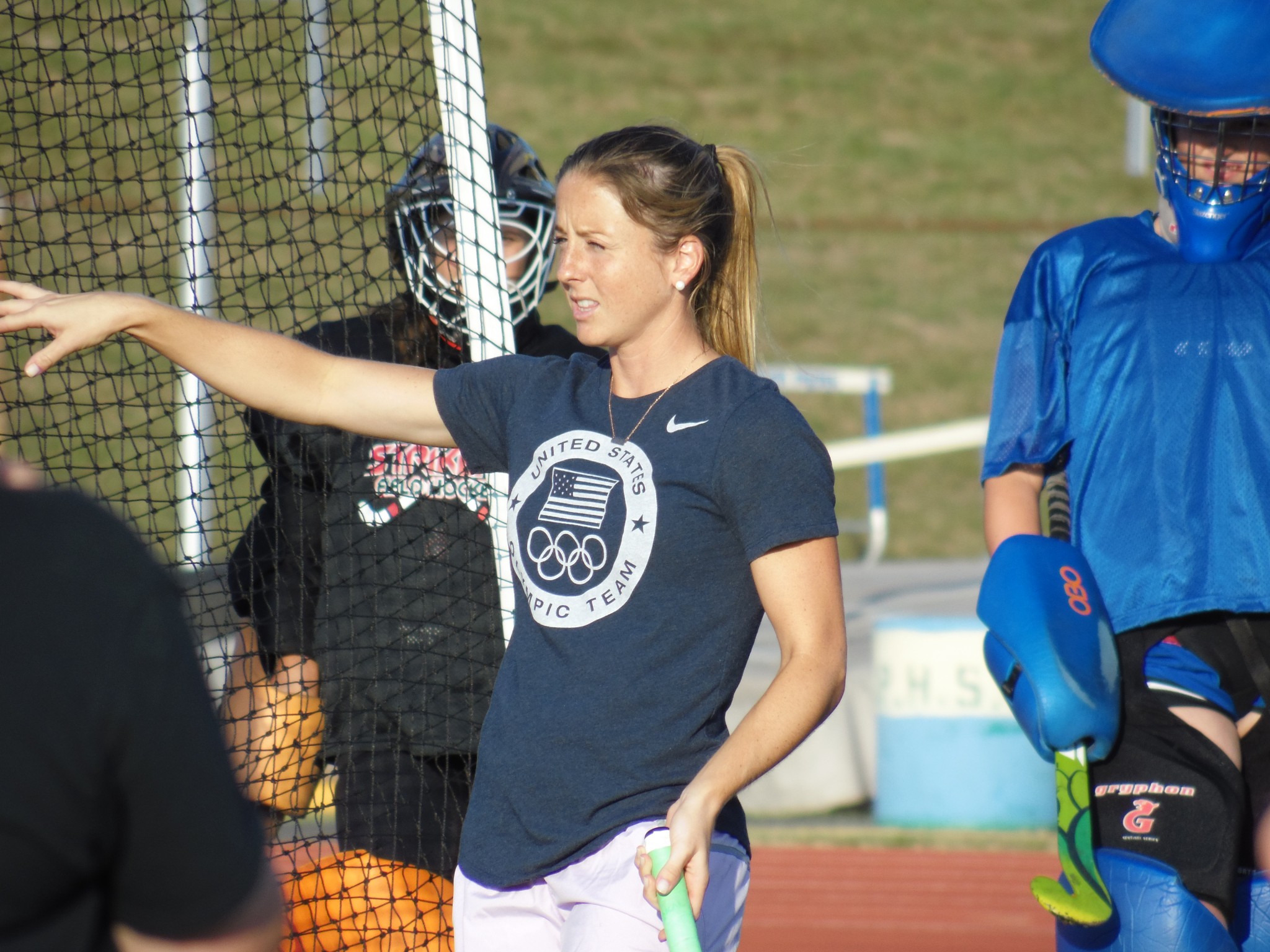 RED HILL >> Not a single player kept their hand by their side when two-time Olympian Julia Reinprecht posed the question, “So, who watched the Rio Olympics?”

On the eve of the 2016 regular season Thursday, members of the Upper Perkiomen High School field hockey team were in the midst of one of their heroes.

A hero who was once in their shoes. One who’s passion for the sport helped her to fulfill her lifelong dream of playing at the Olympic level.

“It’s exciting for me to be able to come out here and talk about my playing experiences,” said Reinprecht prior to assisting with the UP practice. “Hopefully I can inspire some girls to pursue their dreams and maybe one day get to play at the Olympic level.

“I think a problem with our sport is that a lot of girls play just to get into college. After that, their careers kind of come to an end.”

Prior to the practice Thursday, Reinprecht, a Perkasie native, held a Q&A session with the team. She talked about everything from her journey as a player, the conditioning drills with Team USA, eating habits and of course, Michael Phelps.

Later, she ran through hands-on team drills to help develop and fine-tune shooting skills, defense and one-on-one situations. The practice then closed out with a team scrimmage.

“I was kind of star-struck,” admitted senior defender Michaela Swenk. “After we saw everything that she and Team USA pursued in Rio, it was hard not to be.”

“It was really cool to get some feedback and input from an Olympic defender,” said senior defender Gabby Martin. “She’s played the sport at the highest level twice, so she’s someone we should definitely look up to.”

“From watching her play all through the Olympics, it’s so cool to actually have her here with us,” said senior midfielder Kathryn Lehman.

Reinprecht graduated from Mount Saint Joseph Academy in 2009. After that, she attended Princeton University and was part of the Tigers’ 2012 NCAA National Championship team.

“That was frustrating for all of us,” she said of London. “We were pumped to get there and play on the Olympic level that year, but obviously no one was happy with the outcome.”

At the 2016 Rio Olympics last month, Team USA took fifth place, which included a huge upset of No. 2 seeded Argentina on opening day followed by an upset of No. 3 Australia.

“Beating Argentina and Australia right away was awesome,” said Reinprecht, who is also a four-time World Championship gold medalist. “It was good to see us have some success on the Olympic stage because we didn’t get to see that success in 2012. Both of those games were definitely some of my favorite moments from my career.”

Alongside her sister and fellow Olympic teammate Katherine Reinprecht, field hockey has beoame a way of life after starting at a young age.

“Field hockey was always a huge part of my life growing up,” recalled Reinprecht. “My mom was a coach, so she would always take my sisters and I to all of her practices. I’ve always been surrounded by the sport. I fell in love with the sport and could really never get away from it. I think that’s what has brought me to where I am now.”

Reinprecht’s visit couldn’t have come at a better time for Upper Perkiomen, with the Tribe preparing for the season opener on Friday against Souderton.

“We hope that this will inspire our girls,” said Upper Perkiomen head coach Jamie Warren, “not just to do their best this season but to try to get to Julia’s level in their careers. This was great for the girls. They got to see and work in-person with someone they all look up to.”