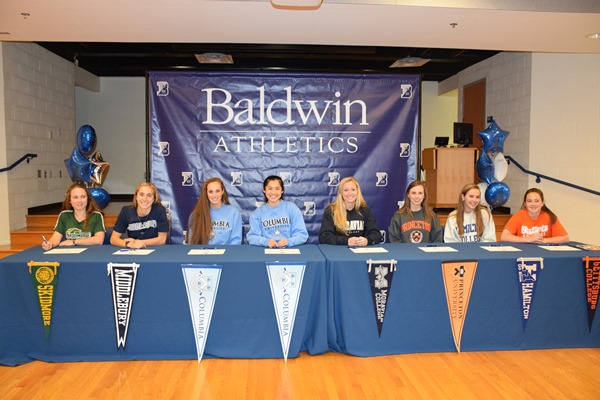 Eight Baldwin School student-athletes from the Class of 2016 took part in a special spring college commitment ceremony May 4 in the Athletic Center. The group announced and celebrated their commitments in front of family, friends, coaches, faculty and staff.

Baldwin School Director of Athletics Deb Surgi said, “When I think about what these young women have accomplished and the legacy they have left Baldwin and Baldwin Athletics, I am filled with pride mixed with some sadness in saying goodbye. Just take a look at their college choices, there is great excitement for the adventure they will soon embark on.

“I can say that all of these young women have lived the following while raising the bar for their Baldwin sports and teams, in the art of self-leadership, the art of teamwork and connecting with teammates, the art of leading others and changing culture and the art of navigating transition in sport and life. Baldwin Athletics congratulates and thanks these student-athletes for sharing their talents and for the unique legacy they each leave to our school community.”