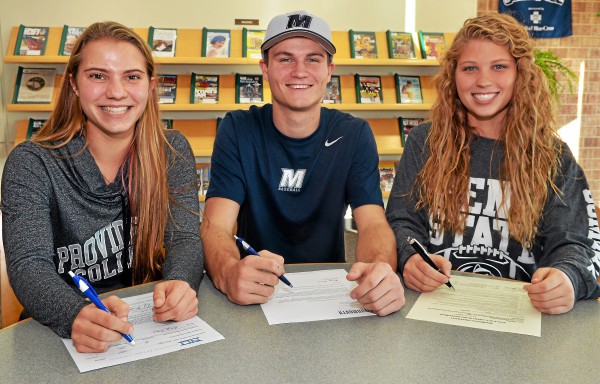 EAST ROCKHILL — For some field hockey is an extracurricular activity. For others, like Pennridge’s Kari Moyer, it is a way of life.

When practice ends some players retreat home for dinner. Moyer, who recently was named first-team All Suburban One League Continental Conference, takes a few more shots and works on her stick handling.

That extra work manifested itself into a spot at an NCAA Division I program. Wednesday Moyer made a commitment to Providence. She and Joe Molettiere (Monmouth baseball) and Natalie Babik (Pennridge softball) all signed their National Letters of Intent in the Pennridge library with coaches, family and media on hand.

Just over the last two seasons Moyer’s high school coach, Becky Spahr, has seen a dramatic difference in Moyer. She is well aware of the work ethic. Moyer’s time spent in the off-season and after mandatory hours is what separates her from a good high school field hockey player to a collegiate athlete.

“Kari puts a lot of time and effort in to her game during the offseason,’ Spahr said. “She can find the back of the net when she needs to and this year she really stepped us a leader of our team. To be a great college athlete you have to put in the effort and that is her best feature.

Moyer, who will enter school as a biology major, has sought help along the way and is grateful to have gotten it from several outlets. She appreciates her family, her club team and the time spent training with Katie O’Donnell. O’Donnell, a 2010 Wissahickon grad and Olympic player, has helped her game improve in multiple ways.

“Club excelled me to the next level and it important for me to be at every practice,’ Moyer said. “Katie really took my skills to the next level in the past year. I found her website and started training with her. We are perfecting everything, getting ready for the collegiate level.’

Moyer looks forward to the chance with the Friars to learn from experienced collegiate players and coaches, who have all made Rhode Island feel like home. Moyer now hopes she has done her part in helping Pennridge prepare for life without Moyer’s stick work in the circle.

“This year she made sure the younger girls have developed in the program as well,’ Spahr said. “Kari is never content. She is always looking to get better. She is already talking about being in the best shape she has ever been in.’