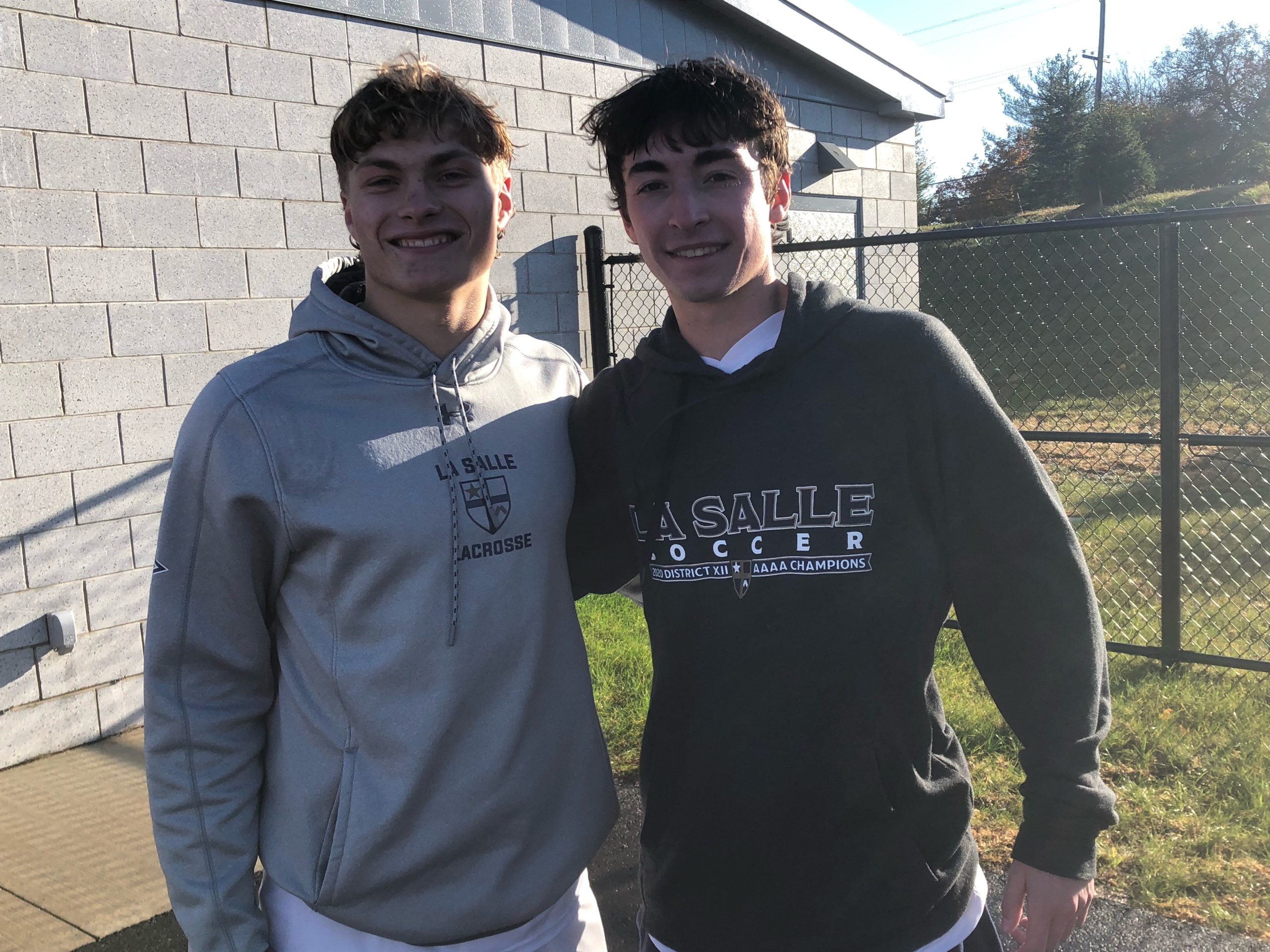 The Ghosts had a knack for scoring early goals and in the state playoffs, that’s usually a good omen for a successful outcome. His Explorers also like to score fast, so when the teams met Saturday at North Penn in a PIAA-4A quarterfinal that turned into a state storm, whichever would score first would have the advantage.

Thanks to Seth Michalak, La Salle took care of that as the junior’s first half hat trick paced the Explorers to a 5-1 win over Abington.

“It’s always a different challenge, even Mother Nature got involved today, always something new,” McCaffery said. “When you look at what they’ve done the last couple times out, we knew they were a fast starting team and we preached the idea of trying to get into them early so we don’t get back behind in a bad spot.”

Michalak only needed 22 seconds to do it, scoring almost off the opening tip. The forward slipped a defender and rocketed a shot into the far post for a dream start and only carried on from there, hitting on a pair of direct free kicks as the weather worsened in a hurry in the game’s first 20 minutes.

“It was a huge advantage, getting off to the right start is one of the hardest things to do in sports,” Michalak said. “I thought we prepared very well, scoring in the first 22 seconds definitely helps and it’s a momentum shifter but we needed that.”

To the Ghosts’ credit, they didn’t shrivel up after the shock and awe opening. It only took them three minutes to come back and draw a foul in prime territory and level the score. Luke O’Donnell hit a great ball off the free kick and senior Liam Hartman was able to hit a looping header into the back corner of the goal with 36:54 left in the half.

Almost right after, a previously nice afternoon turned gray as a wash of rain and strong winds came through and stayed until the latter portion of the second half.

“It was awful, it was so cold. It was probably the worst conditions I’ve ever played in,” Abington senior Jimmy Marino said, standing in the suddenly-sunny skies postgame. “It also cost us three goals, they had the wind and another shot just came off our keeper’s hands. I think if we played in this weather, it could have been a different game.

“We were kind of in shock, it was beautiful then it all started to come down.”

BOYS SOCCER 31:39 1st half: La Salle 2, Abington 1
Seth Michalak on a brace, snaking a free kick in to put Explorers back in front pic.twitter.com/J8TNH85pxf

There was no lightning in the sky, but La Salle has some of it on the field in Michalak and five minutes after Abington’s equalizer, the Explorers drew a free kick just outside the penalty area. McCaffery wanted Jake Barton to take the kick but he also gives his players the freedom to make their own choices if they see something else.

Barton and Michalak talked it out and it was Michalak who struck the kick with his left foot and hit it around the wall and just inside the post to restore the Explorers lead.

With 15 minutes left before halftime, he got another look from almost the same spot and hit this off his right foot and under the wall past the keeper.

“I was feeling it,” Michalak said. “I was definitely in my zone, which starts with having the right mentality and even when you score, it’s the next one. You forget about it and it’s about the next goal every single time.”

La Salle senior Hayden Grosso said the team’s taken on a different mentality since the postseason began. The Explorers got through the PCL playoffs to win their third straight and fifth in sixth years and are fully invested on a state title now.

That’s the internal mentality but they also understand each opponent is going to have their own. That’s where the work and intensity on the field come in as the Explorers try to take each foe out of their element as early as possible.

“Once you change people’s mindsets, they switch off and we took the momentum completely,” Grosso said. “We never were out of the game. We’ve been tied and down in games, we’ve always stayed composed and found ways to win those games and it’s why we’re still here.”

Abington saw its season conclude but Marino had no regrets about what he and his teammates had accomplished. The Ghosts won the SOL Liberty title, earned a no. 5 seed in the district tournament and finished third in the District 1 playoffs while making their first state appearance since 2018.

Ghosts coach Randy Garber couldn’t help but wonder himself what could have been if those free kicks weren’t hit in a driving rain but otherwise had no regrets about his team’s season. He’s had good teams in the past, but it was this group’s bond that set it apart.

“We had a good year, we just didn’t play well today,” Garber said. “This was an excellent group, a fun group that won a lot of games. In the 28 years I’ve been here, this is one of those special groups of guys that just believed in each other, trusted each other and played some good soccer along the way.”

Marino, a starting defender who played keeper in the second half and even made a nice point-blank save on Michalak, said it was a bond he hadn’t seen in his previous three years with the program.

“It’s been the best four years of my life with these boys and getting a chance to bring our whole community out here was awesome,” Marino said. “All the pasta parties we had, hanging out after games and practices and even in school just saying hi to each other and giving love in the hallways, it helped us. We didn’t have that same bond the last three years but this was a different story. It wasn’t even the senior class, the entire team was together.”

BOYS SOCCER 10:26 2nd half: La Salle 5, Abington 1
Conor Clair at the end after a terrific build up by the Explorers pic.twitter.com/0znaRyZ4jY

Conor Clair had La Salle’s other two goals, getting his first on a hard-hit shot in a brief moment of space late in the first half, then hitting one in during the second half after a really well-built sequence by his teammates led to an easy finish in front.

Grosso said the second half goal was an important one to get because it not only put the game away but kept the Explorers motivated to keep their match intensity up and let some of their teammates get a spell on the field.

La Salle moves on to its second state semifinal in the last three years and for this senior-heavy group, the only motivation they need is knowing a trip to Hershey awaits on the other side.

LOVE THROUGH THE GAME >> Prior to the first kick, Abington’s captains presented the Explorers with a signed ball as a tribute to Blake Barklage.

Barklage, a La Salle senior and manager for the soccer team, passed away due to a sudden cardiac event on Oct. 30, just hours after team had won the PCL title. Since then, opponents have shown support for the La Salle players and community and McCaffery, who held the signed Abington ball postgame, said it’s a reflection of the shared respect in the local soccer community.

“When you look at the amount of respect our young men and the program gets from everybody reaching out to offer condolences, it’s huge,” McCaffery said. “There’s respect from our guys given to everybody we’re going to see and I think it’s being reciprocated from everyone in this time.

“Our guys are battling through it and playing through it. Some moments are easier than others but when you have that support, it shows what the sport can do to alleviate some of that grief our guys and our community still feel.”