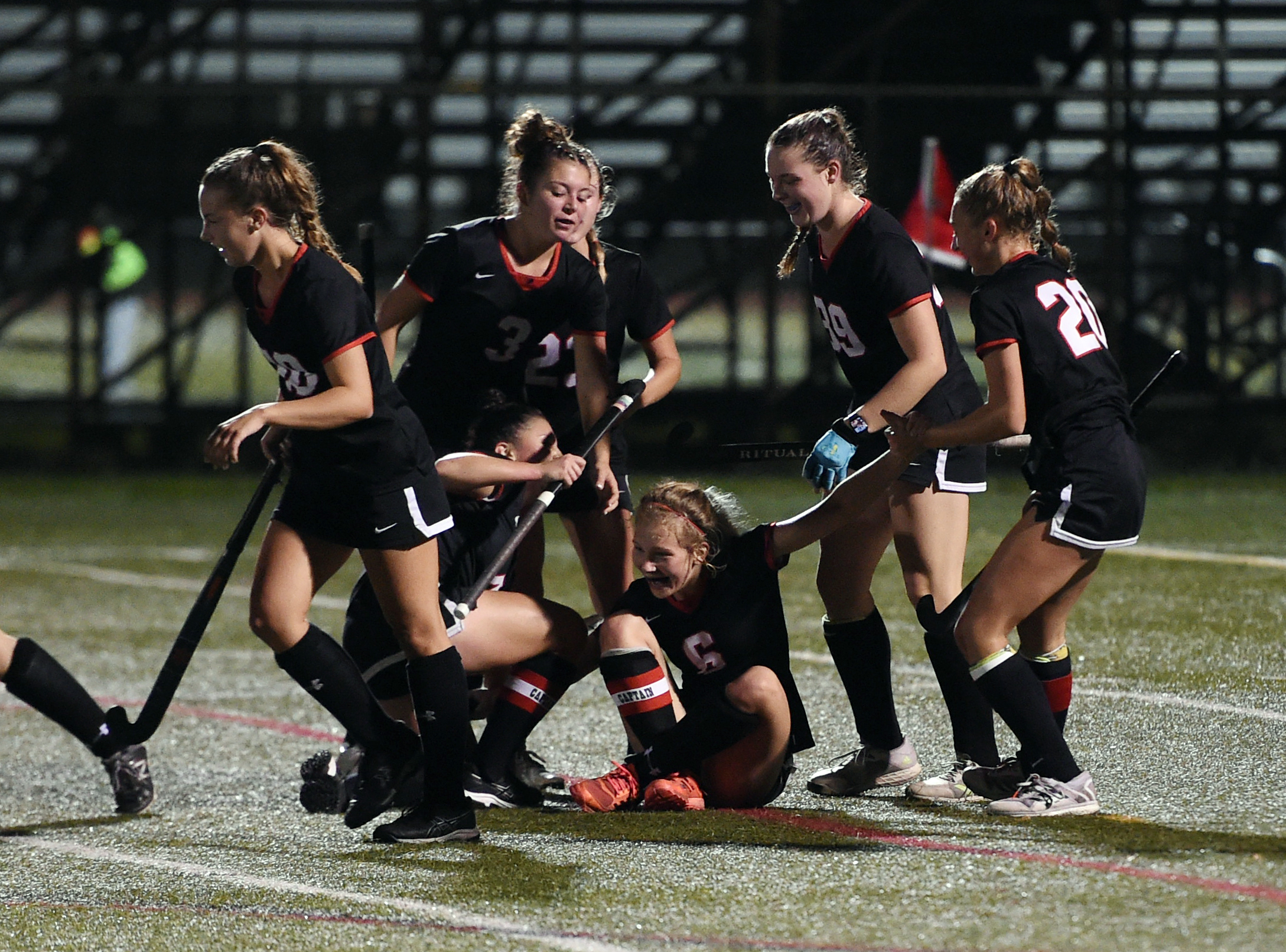 Boyertown’s Lauren Eves (6) is helped up by teammate Remi Lloyd (6) after assisting on the game-winning goal Tuesday against Methacton in a PAC Final Four game. (Owen McCue - MediaNews Group)

Boyertown junior Katelyn Dulin made her way up and down the field late in Tuesday night’s game at Upper Perk with a noticeable limp.

Struggling with cramps in both of her calves, it didn’t matter. She needed to push through.

This was a moment Dulin had waited a long time for — the Pioneer Athletic Conference Final Four.

It was the first league postseason for Dulin and her teammates as well as many others around the area as one of the premier nights in the PAC calendar made its return after a one-year hiatus.

“Ever since I was a little girl, I was coming here watching the games, and my dad said, ‘It should be your goal to play in the final.’ And here we are,” Dulin said Tuesday night. “I’m really excited.”

With the cancellation of spring sports in 2020, and no league postseasons played during the 2020-21 school year due to COVID-19 restrictions, Tuesday marked the first night of PAC playoff games since the boys and girls basketball championships in February 2020.

For the first time since 2019, the PAC’s fall sports played their Final Fours with eight semifinal games taking place at three different locations around the area.

The night did not disappoint.

There was a five-setter in one of the girls volleyball semifinals — Pope John Paul II outlasting Perkiomen Valley on the Vikings’ home court
There were two one-goal games in field hockey at Upper Perkiomen, including Dulin’s Bears upsetting Methacton in overtime when she found teammate Remi Lloyd for the game-winner.

At Owen J. Roberts, where four soccer semifinals took place, there were two one-goal contests on the girls side — the host Wildcats avoiding an upset from Pottsgrove when Alexa Vogelman scored in the final seconds.

“I’ve never felt this because I’m only a sophomore,” PJP’s Hutton Cordrey said of the playoff experience after her team’s tight win. “It’s really nice to get excited for every point.”

Champions were crowned last fall, but the absence of the league’s postseason was apparent.

Rather than deciding the league head-to-head, there was standings watching to go along with some simple math to figure out who won a title and when they won it.

Teams played in postseason games last fall, winter and spring as District 1 and PIAA held their annual tournaments and championships, albeit with reduced fields in certain sports.

Even those teams who did make runs lamented the missed chance to face off against their league rivals for a title.

Though district and state titles carry with them more notoriety outside the area, there is something special about competing for a league crown.
There’s often large-sized crowds and the big-game feeling that comes with playing under the lights. There’s familiarity and rivalries like the past two league winners, Boyertown and Pope John Paul II, going against each other for a championship.

There are also storylines like the Upper Perkiomen and Pottsgrove girls soccer teams proving they can hang with the big schools of the league.

It all comes together to make two truly special nights of high school sports.

Thursday night should be another good one as the PAC will crown four champions following the first four league championship games in 19 months.
Upper Perk hosts Boyertown in field hockey. Pope John Paul II and Boyertown square off at Perk Valley in girls volleyball. At OJR, the Wildcats host Upper Perkiomen in girls soccer, and Methacton faces the Bears on the boys side.

It’s a moment many area players like Dulin have dreamed of. All can agree it’s exciting to see those dreams have the opportunity to come true once again.

“It means everything,” Dulin said.