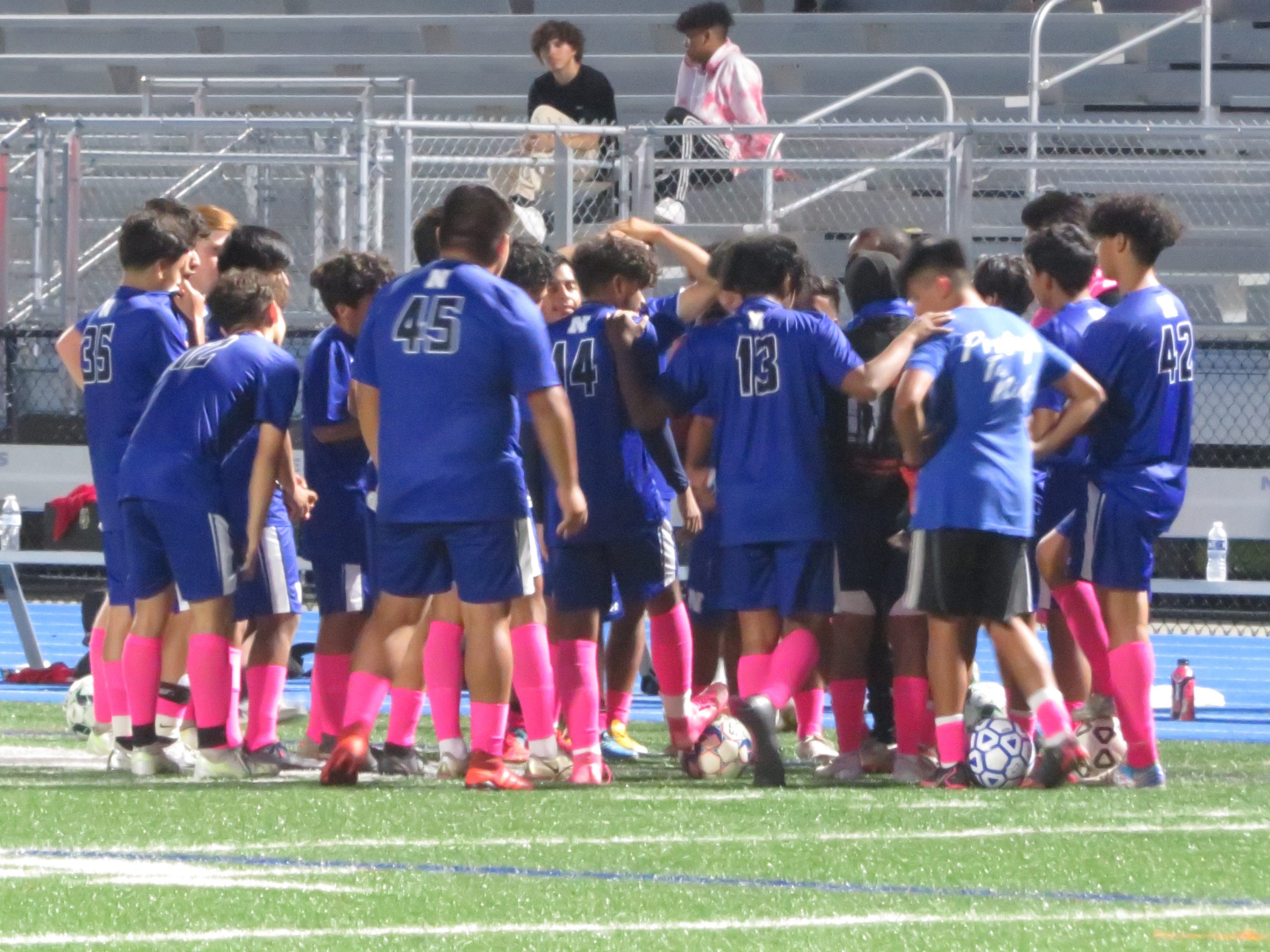 Norristown huddles up before a game against Spring-Ford on Thursday, Oct. 7, 2021. (Ed Morlock/MediaNews Group)

WEST NORRITON >> Norristown head coach Jason Pinnock thought Jesus Carmona was going to be his goalkeeper this season. Instead, the junior is playing defense and taking free kicks.

In Thursday night’s Pioneer Athletic Conference Liberty Division game against Spring-Ford, Carmona took two free kicks from around midfield. He sent both balls into the box and teammates Diego Guzman and Adan Morales put them into the back of the net to give the Eagles a 2-0 win at Norristown Area High School.

“(Carmona’s) learning his position,” Pinnock said. “He’s understanding it. He’s getting a lot better at it. The guys trust him back there and I also think that’s helping him.”

“I was supposed to be a goalie but I didn’t want to,” Carmona said. “I like (playing defense) more than goalkeeper.”

The first goal of the game came in the 36th minute just before halftime. Norristown’s Renato Castillo earned a free kick on Spring-Ford’s side of midfield. Carmona stepped to the ball, 54 yards from the goal, and sent it into the box. Guzman gained possession, moved right, and put it away for a 1-0 lead.

Breaking a scoreless tie late in the first half is the opposite of what happened when the Eagles faced Perk Valley Tuesday. In that game, the Vikings scored two goals in the final four minutes of the first half en route to a 4-0 win.

The second goal came in the 56th minute. This free kick, from 59 yards away, went to the left side of the box. Morales came up with it, turned and fired a shot past the keeper to double Norristown’s lead, 2-0.

The Eagles (7-6, 2-5 PAC Liberty) played most of the second half without Guzman. He exited the game with 30 minutes remaining after trying to save a ball from going out of bounds and never returned.

“Without Diego we lose the heart of the team,” Pinnock said. “I’ve taught these guys to learn how to play without him. You’re just as good as your worst player and Diego has been able to start helping everyone. The guys are starting to realize they can’t just sit there and watch him. They’re all playing off of him and it’s beautiful.”

The Rams (8-4-1, 2-4-1 PAC Liberty) had possession most of the second half but couldn’t score. They earned two corners and put five shots on goal, but Norristown keeper Alex Rosas turned them all aside.

“That loss is on me,” Spring-Ford head coach Brent Kissel said. “I didn’t have my guys prepared. Norristown is a good team. They’ve been competing with everybody in the PAC this season. We came out flat. We came out flat against Boyertown (4-2 loss). We tried to adjust some formational stuff in the second half. We couldn’t put it through. Once they got that first goal then the second one, they really packed it back on us and it’s tough to break down.”

“Teamwork and communication,” Carmona credited for the defensive success.

The win moves Norristown over .500 and helps the team’s push for a District 1-4A playoff spot. They entered the game ranked No. 28 before knocking off Spring-Ford, which was No. 9. The top 24 teams qualify for the postseason

“It’s (a) huge (win),” Pinnock said. “It’s our second division win. We’ve never been able to compete against any of these teams and we are able to now. I’m very proud of them.”