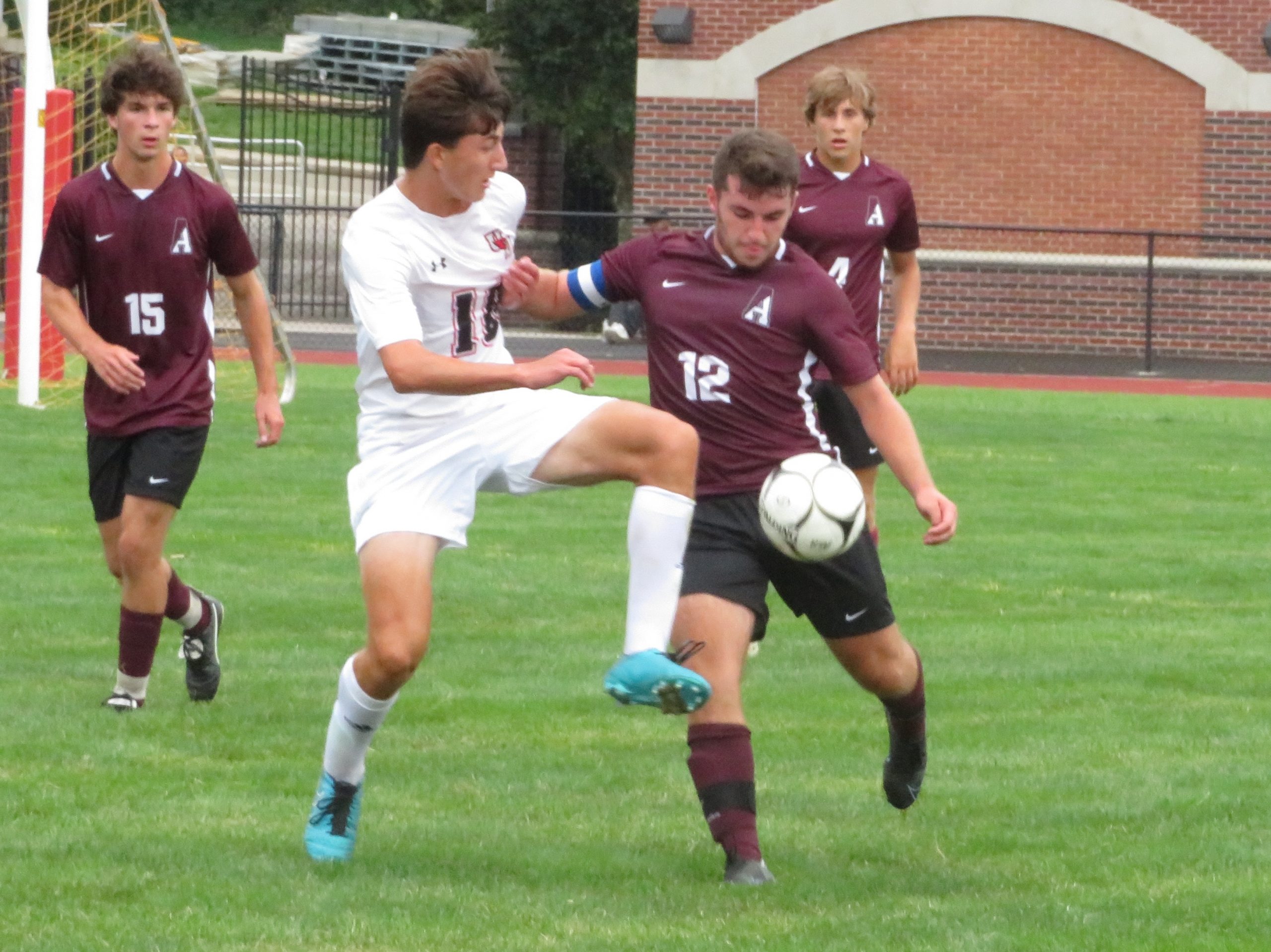 ABINGTON >> After a scoreless first half, Abington wasted no time getting on the board after intermission against Upper Dublin Thursday afternoon.

Junior Luke O’Donnell scored less than a minute into the second half and senior Pat Capone added another 10 minutes later to lead the Ghosts to a 3-1 Suburban One League Liberty Division win over the Cardinals at Abington Senior High School.

“We had a talk at halftime that we needed to put pressure on them,” Abington coach Randy Garber said. “They were winning too many balls. Their midfield was getting balls forward. We were fortunate that it ended up 0-0 at halftime.”

“We just needed to put them in the back of the net,” Capone said. “We needed to win this game. We didn’t come out great in the first half. We knew we needed to come out better in the second.”

O’Donnell’s goal came off a rebound. Junior Liam Hartman took a shot that Upper Dublin goalkeeper Gabe Loza stopped with a diving save. The ball bounced to O’Donnell, who fired on target. Loza made another diving attempt and got a piece of the shot, but it still found the back of the net to give Abington a 1-0 lead.

Capone doubled the Ghosts (2-0, 1-0 SOL Liberty) advantage nine minutes and 28 seconds later. Jimmy Marino threw the ball from the sideline into the box and, after it bounced around, Capone volleyed it into the goal.

“I saw the ball coming up and I volleyed it, left foot,” Capone, who’s right-footed, said.

Upper Dublin (0-2, 0-1 SOL Liberty) controlled play for 20 minutes after falling behind 2-0, but Abington goalkeeper Kevin Krechman kept his side ahead with eight of his 12 saves coming in the second half.

The Cardinals had a good chance to cut their deficit in half when Zach Berman took a free kick from just outside the box. His right-footed shot cleared the wall of defenders and was going to sneak in under the crossbar, but Krechman jumped and got his fingertips on the ball to keep UD off the board.

Upper Dublin finally scored with 12:16 remaining when John Reilly gathered a loose ball in front of the goal and put it away, making it a one-goal game.

“I think the boys did really well today,” Upper Dublin coach Noah Johnson said, “just a lot of unfortunate things that were happening. Still some work that we have to put in, but I feel like once we start to get a couple of things down – just finding simple passes instead of always looking to go long – we’ll be in good shape for the rest of the year.”

Five minutes later, Abington added an insurance goal. Senior Thiago Danielle moved to his right and shot low, across his body, to the left to put the game away.

“They came down and scored a good goal,” Garber said. “Then we finally decided to do what we were supposed to do. We came forward, won the ball and ended up getting a third goal. It was a go-ahead goal as far as knocking the wind out of them.”

Helping off the field

The Abington boys soccer, girls soccer and field hockey teams decided to help Upper Dublin after the community was hit hard by Hurricane Ida last week. The teams collected $20 gift cards from the players to give to the Upper Dublin administration for families in need.

“We’re just collecting the gift cards as a gift to them knowing the disaster that took place with them,” Garber said.