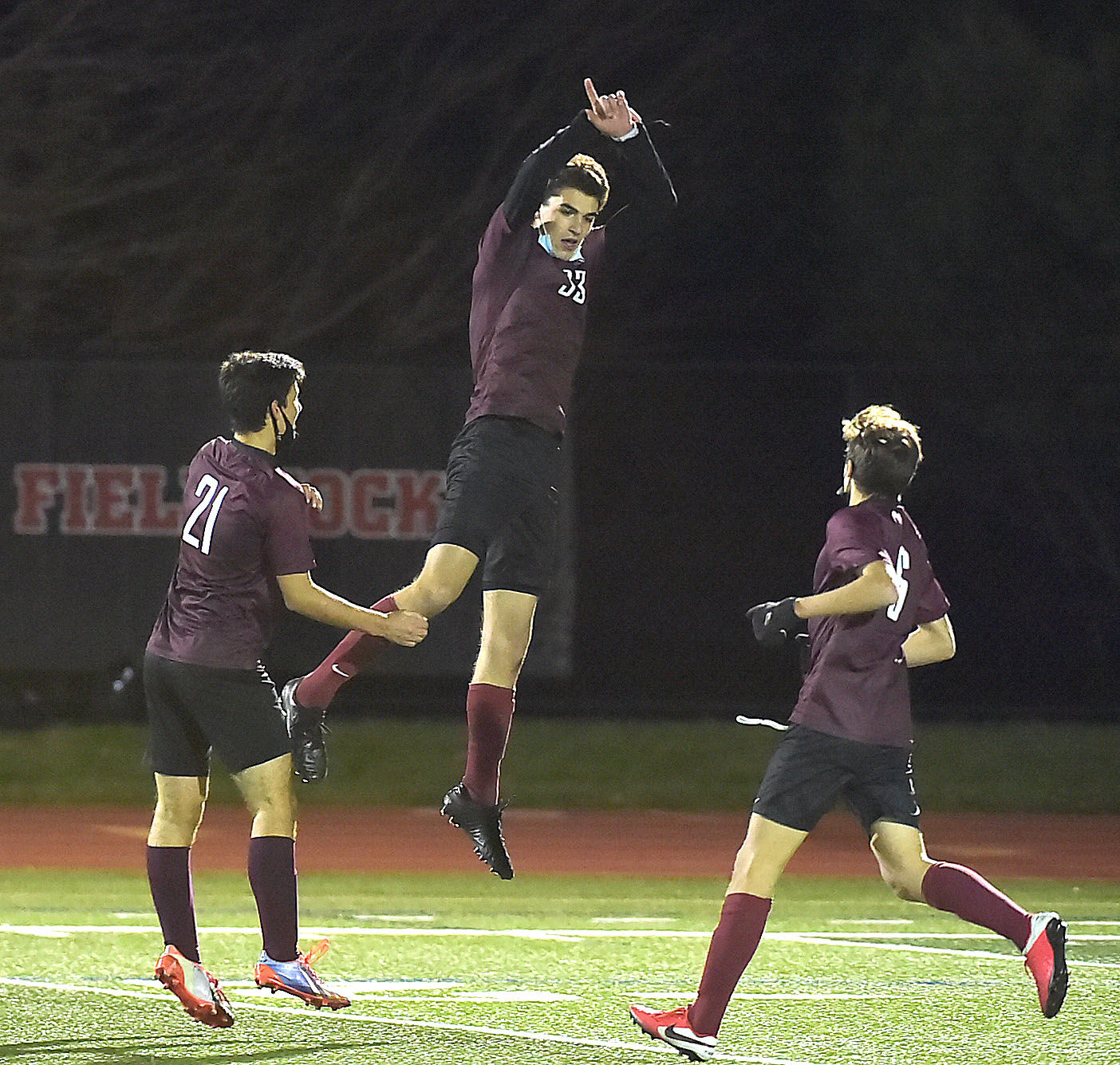 LOWER MERION — It was only a matter of time, you had to figure. With all the dangerous runs down the wing by Shane Brown, or Sam Nyenka, or insert-name-of-Lower-Merion-winger here, and all the dangerous balls served into the box, sooner or later, Garnet Valley would be breached.

The Jags were living dangerously in the face of the Aces’ incessant pressure. And all it took was the right combination of Brown’s service and a run by Josh Axelrod to get the only goal LM would need.

Brown and Axelrod connected in the 32nd minute, and center back Will Pitonyak added an insurance tally off a corner kick in the second half as the No. 3 Aces claimed a 2-0 win in the Central League semifinals at Harriton Thursday night.

Garnet Valley goalkeeper Chase Woolard dives for a ball in the first half of their semi-final match-up at Harriton High School Thursday evening. (Pete Bannan/MediaNews Group)

Brown tormented the Jaguars’ defense time and again, coach Nico Severini subbing liberally to keep him and the other wingers fresh. Eventually, a breakthrough came, courtesy of Axelrod, who made the back-post run and nodded home the right-wing delivery.

“It was just a matter of how many times I was getting through the back,” Brown said. “I knew I could beat the man. It was just about putting the right weight on the ball and I saw Josh back post, and I just lifted it perfectly and he had a nice header down.”

The Aces showed how many ways they can beat an opponent. Their wingers pinned the defense back all night, which meant limited pressure when Pitonyak or Lincoln Blouin sprayed balls across the field from the center of the park. Add in the hold-up play of forward Owen Downey, willing to use his big frame to get others involved, and it seemed inevitable that the one-way traffic would pay off eventually.

Garnet Valley goalie Chase Woolard made 10 saves, plus a half-dozen assorted crosses and punches off his line. But there was hardly a pause in the action around his penalty area.

“We know that we can play a lot better than a lot of other teams, just playing the ball on the ground and playing actual soccer,” Pitonyak said. “And we try to do that as much as we can when we have the ball. It really helps us get forward and get what we need.”

“They were moving the ball back and forth on us,” Woolard said. “We didn’t put enough pressure (on). They had a lot of pressure on the back. They move the ball really well, they’re a really good team. It’s definitely difficult. … It’s a lot of communication, and you can’t get them all. One slipped through, they capitalized. They’re a good team. They’re going to do that.”

Woolard made a diving save in the 10th minute to keep out a Downey shot through traffic. Nyenka lashed a shot from outside the box off the crossbar in the 24th. Even on Pitonyak’s goal, off one of many set pieces or dangerous long throws from Jonathan Monseco, Woolard fought off the initial header. But he had no reply on the side volley the center back hit with venom into the bottom corner.

For seventh seed Garnet Valley, its last game showed its comfort without the ball. Third-seeded Radnor dominated possession, but that didn’t stop the Jags from running out as 3-0 winners Tuesday.

Thursday, though, was a steady thrum of threats by the Aces. While the defense, marshaled by Liam Ballas in the center and Eric Albright at outside back, held up well, trying to keep pressure on all of LM’s dangerous players was like a game of defensive whack-a-mole. And the LM forwards kept The Jaguars pinned back, disrupting attempts to build offense.

The Jags’ first shot on target didn’t arrive until the 47th minute, a Matt Ominsky effort through traffic that Sean Li caught. Pitonyak toed a shot off the line with 13 minutes to play after Li punched a corner off the face of Colin Smith and into a dangerous area.

What they achieved against Radnor, to Woolard, tempers Thursday’s disappointment.

“It’s definitely different than when we left Radnor,” Woolard said. “That was ecstatic, everyone was pumped up. But we had a great season, so it is what it is. I think we should be proud of ourselves. I’m proud of myself, I’m proud of my team.”

For Lower Merion, which won a game in the PIAA Class 4A tournament last year, a semifinal date against the winner of the other semifinal, Harriton and Conestoga, isn’t quite the same. But it’s certainly much better than nothing.

“It’s definitely different,” Brown said. “We can’t take anything for granted. We’re happy to be playing. It’s nice to be as a team, and I feel like we’re just lucky to be here and we’re excited for the championship.”