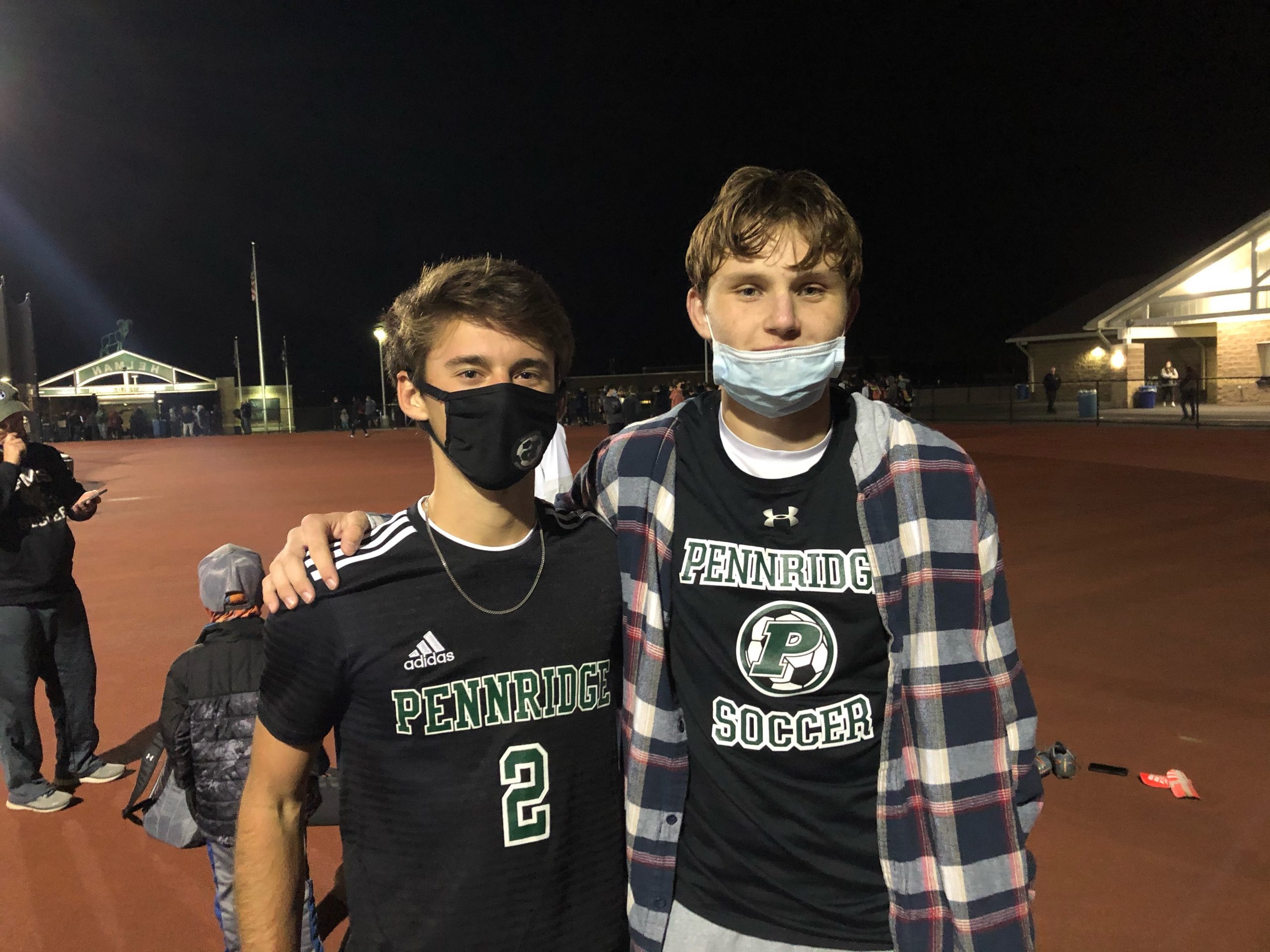 The No. 12 Rams boys soccer team had been living on the edge most of the fall, but especially the last eight days with two goals, each scored in the last two minutes of regulation, extending their season. Thursday, hosting No. 13 Upper Dublin in the District 1-4A quarterfinals, Pennridge had to gut out a different kind of stressful ending.

Thanks to a first half goal by Ben Scary and a few breaks their way, the Rams topped the Flying Cardinals 1-0 and moved on to the semifinals.

“That was a tough team, they played to the last five seconds for crying out loud, so there was not any letdown,” Rams coach Pete Valimont said. “It’s a testament to how tough that division is. We went through Hatboro-Horsham, then Abington and now Upper Dublin, so we feel like we’re ready to go.”

Pennridge’s Odysseus-like path back to Helman Field required the Rams to win 1-0 at Hatboro-Horsham on Oct. 28 just to qualify for districts and eke out a win at No. 5 Abington on a last-minute goal in the opening round to set up a meeting with the Cardinals. While there were no Sirens, Cyclops or Scylla to go through, there were three really good teams.

Upper Dublin also had some inside information. Cardinals coach Andy Meehan coaches a number of Pennridge players in club, so aside from wanting to see his UD team move on, he had some personal bragging rights at stake.

While the outcome didn’t go his team’s way, Meehan had nothing but praise for his team and especially its senior class.

“It’s definitely a good season but it wouldn’t have mattered without these seniors and what they put into the program,” Meehan said. “Their leadership, they’re ability to lead by example but also communicate to the other players, it’s one of those things you love as a coach. These boys love the game and I just feel so terrible for them.”

Pennridge nearly struck two minutes in when speedster Aiden Castle got sent in behind the back line only for UD senior Spencer Beidner to deny his breakaway shot.

A major part of Pennridge’s success in its postseason push has been scoring off set pieces. Thursday, they felt they would have an advantage on corner kicks if they could get the ball down near either post. Eight minutes in, the Rams got a corner and nearly got their goal when Colin Monahan headed Connor Gabel’s service to Shane Velez but Veleze flicked the ball off-target.

Just a few minutes later, Pennridge got another corner, Gabel hit another service, Monahan sent another header back in and Ben Scary made it count.

“It was pretty much the same play,” Monahan, a senior center back, said. “I went up and headed it back across and Ben was there to put it away.”

“I knew I had to go front post and get the ball coming across,” Scary, a senior midfielder and co-captain, said. “It was going be coming from Monahan or Shane and I wanted to be there to tap it in at the post.”

Pennridge’s midfield and back line had a tall order of slowing down a Cardinals attack that had really found its confidence over the final push of the season. UD, which knocked out No. 4 Downingtown West in its playoff opener, played with a high intensity throughout Thursday’s match.

Monahan credited the Rams’ coaching staff for having the team fully prepared. The game-within-a-game saw Upper Dublin try to use Meehan’s knowledge of the Rams’ players while Pennridge wanted to put those players in the same position to succeed.

“We tried to limit their transition,” Monahan said. “They wanted to swing it around the backs, keep transition and play balls in. I felt we did a good job keeping them in front of us and not letting anyone in behind us.”

Junior Ryan Saville, one of Meehan’s club guys, was put to task at left back but he more than held his own. On the other side, senior Dalton Guthrie was also stout defensively as the two fullbacks didn’t give Upper Dublin a lot to work with on the flanks.

In the middle, the Rams focused on keeping Cardinals senior Sean Seabrook in check. The attacking midfielder had his team’s best chance on the first half, working through marking to fire a shot through traffic that Rams keeper CJ Dimmick was able to turn away two minutes before the break.

“Five of our guys play for Coach Meehan, so he knows them really well,” Valimont said. “Ryan Saville, he kept getting attacked but he’s been lights-out so I’m really proud of him and I hope his confidence is through the roof.”

Holding the lead in the second half, the Rams got a little too sloppy on the field and began conceding set pieces in dangerous areas. It all came to a head with 4:37 left in regulation when a foul in the box awarded UD a penalty kick.

Unfortunately for the Cardinals, but much to the relief of the Rams, the attempt was not put on frame, keeping Pennridge ahead.

“I want my boys to do well and for the most part this season, they have, they’ve done everything I could have asked for,” Meehan said. “They’re fantastic players and they should always walk off the field with their heads up high. Those seniors are pretty much the sole reason we’re here, they mentored our younger players.”

Before their gauntlet of SOL Liberty teams, the Rams had to get through the SOL Colonial and it’s something Scary felt benefited them down the stretch of Thursday’s contest.

“It goes back to how solid of a conference we play in,” Scary said. “We’re used to battling every single game and when it comes down to those really neck-and-neck games, we’re always ready for that battle.”

While Odysseus returned home to Ithaca and didn’t leave again, the Rams aren’t so lucky. They’ll be on the road to face No. 9 Spring-Ford in the semifinal round on Tuesday.

At least the Rams are used to being on the road and if anything, they’re looking forward to seeing a team that isn’t from the SOL, just to break things up a bit.

“We never thought we were going to have this chance again after losing at CB South, so we’re thrilled to have this opportunity and want to make the most of it,” Monahan said. “It’ll be a change of pace playing someone that’s not a Suburban One team or from our conference.”