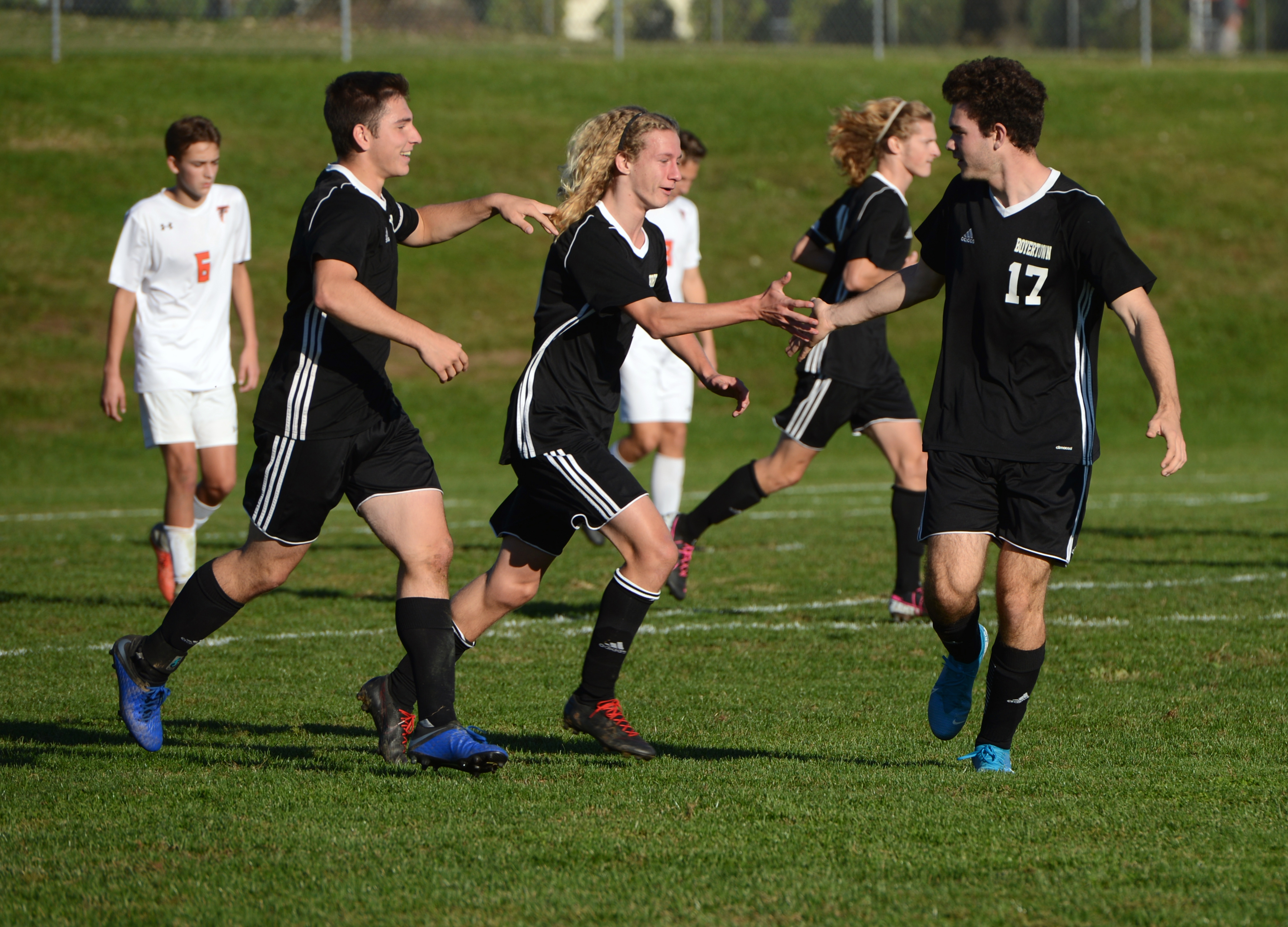 Boyertown’s Dimitri Randjelovic celebrates after his game-tying goal in the second half against Owen J. Roberts in 2019. (Austin Hertzog – MediaNews Group)

Outlook: Boyertown is coming off the best season by a Pioneer Athletic Conference boys soccer team in league history after making the District 1 final and PIAA semifinals a year ago with a high-quality possession style of play under coach Mark Chambers. Chambers moved on to take an assistant position at West Chester University, making way for another coach who had a win-filled fall in 2019, Matt Danner, who was lead assistant for the state champion Boyertown girls team. It’s hard to overlook the names that aren’t back – defender Ryan Foskey (All-Area Player of the Year), goalkeeper Mason Kurtz (All-Area first team), midfielder Landon Wenger (AA first team, West Chester Univ.) and midfielder Jacob Groff (AA second team) – but the returnees garner attention too. The attack is largely intact with senior forwards Nick Willson (All-Area second team) and Matt Kerr and junior Beckett Wenger returning starters, along with attacking midfielder Dimitrije Randjelovic. “The main themes for the program this season are focus and consistency,” Danner said. “We have a lot of returning players from that team who gained valuable big game experience. With that said, we lost several key players to graduation, mostly in our defense. We will need players to step up to fill these spots and learn to play together in a condensed season.” It’s a different season to 2019 in so many ways, but there is enough the same for the Bears to be deserving of being favored to repeat as PAC champion and capable of a lengthy run in whatever postseason there may be.

Outlook: This fall was always going to look different for the Blazers, regardless of adjustments in response to the COVID-19 pandemic. Daniel Boone moved from Berks I to Berks II this fall, joining a division with Fleetwood, Conrad Weiser, Muhlenberg and Twin Valley. Fleetwood has owned the division of late. Daniel Boone must replace seven starters but the division move should help it get closer to a winning record with intentions of returning to the District 3 Class 3A playoffs.

Outlook: Methacton is entering something of a reboot with the graduation of nine starters from last year’s 8-9-1 team. With new personnel comes new opportunity though. Without as much continuity as some other teams, finding the right blend quickly will be key for the Warriors. “The defense is shaping up to be a solid unit,” coach Dave Stevenson said “They communicate well, position themselves appropriately, and consistently pass with accuracy from their respective positions.” The extra preparation time due to the delay of the fall season should help the Warriors, who Stevenson said kept a ‘great attitude throughout the uncertainty.’ Methacton presents an unknown in a season filled with them. “The team works together well and barring numerous injuries, will again be competitive with every team in the PAC,” Stevenson said.

Outlook: The Wildcats were consistently competitive last season, but the results weren’t as consistent. It resulted in good results – they were one of only 3 teams to beat state semifinalist Boyertown – and were within an overtime goal of making the PAC final, but OJR’s third place finish in the PAC Liberty was indicative of the season. The Wildcats will lean on their defensive returning players, led by All-Area honorable mention Julia Funaro. The graduation of top scorers Ethan Gawlik (AA first team) and Kyle Storti (second team) leaves important roles to fill. “We will need to find scoring from many different places in order to win close games,” coach Eric Wentzel said. OJR was the first school back to action for voluntary workouts in July following the shutdown, something coach Eric Wentzel hopes aids his team’s progress in 2020. “We will be a young team looking to improve as the season progresses. We have been working hard all summer and the workouts were well attended.”

Outlook: After reaching the state playoffs and winning the PAC championship the previous two seasons, it was a rebuilding year in 2019 for Perkiomen Valley. With a sizable senior class, the Vikings hope to be built back up in coach Zach Allen’s second year in charge. Four-year starting midfielder Matt Holmes and defender Steve Warren (both All-Area honorable mention) are top returners for a senior group that has experience but needs to take a step forward. “If the role players from past years can step into leadership roles and become impact players, we can be competitive,” Allen said. More than anything, the Vikings grasp the fragility of a season being played amid a pandemic with only seven of 12 PAC teams participating and are grateful to be playing. “It has resonated with the seniors as they are looking to cherish every moment and do everything in their abilities to follow our safety protocol,” Allen said. “Our main goal is to provide the seniors with lasting memories and not jeopardize the season that they deserve to have.” Outlook: Everyone is in uncharted territory right now. Pottsgrove is soccer-wise too. The Falcons have been kings of the PAC’s smaller-school Frontier Division for more than a decade. But this fall, Pottsgrove is one of two Frontier schools competing in the 7-team PAC largely composed of the league’s best big schools. It raises the regular-season degree of difficulty like never before. “We return 11 players with varsity experience. In a normal year, that would be a great starting point. With a reconfigured PAC schedule, we will need to learn something about ourselves with each game,” said assistant coach Jeff Erb. The loss of leading scorer Ethan Pace (All-Area first team) will be felt, but the Falcons can take heart in returning six All-Area players in Shane Gleason, Justin Collings, Cooper Fiore, Jeremy Thompson, Landon Shivak and Mike Troutman. Fitness has been a focus with the knowledge that no easy games are coming their way this fall. Hanging with the big boys has been a badge of honor in past seasons. This fall, it’s a must for Pottsgrove to achieve the success it’s accustomed to. Outlook: Spring-Ford has consistently been a top team in the Pioneer Athletic Conference and looked primed for its best season yet after reaching the PIAA playoffs in 2018. But a bitter end with defeat in the PAC finals a third straight season and upset loss in the second round of districts to Abington left a sour taste a year ago. The Rams will be intent on turning the page even with the departures of dynamic forwards Colin Trainor (All-State), Brandon Duke (All-Area first team) and Brett Gulati (All-Area second team), and holding midfielder Ethan Mossip (All-Area first team). The Rams don’t anticipate a big dropoff offensively with Tommy Bodenschatz and Colton Pollock now leading the line while Connor Lynch looks to be the main man in the midfield. Defense is a focus this fall, coach Brent Kissel looking to be ‘better defensively on set pieces and in team defense.’ Citing its 24 goals against in 21 matches a year ago (1.14 goals against average), “That statistic is not good enough if Spring-Ford
wants to continue being a postseason threat,” Kissel said. With a senior class that has only known PAC final heartbreak, they’re intent on ending that trend. “This year’s seniors are not letting anything come between them and finally securing a PAC Championship after coming so close their past three years,” Kissel said.

Outlook: This feels like the season Upper Perk has been building toward. The current seniors arrived early by winning a district playoff game as sophomores but weren’t able to build on it last season as much as the Tribe may have hoped. Upper Perk should be tough to break down with returning starting center backs in Jack Cupitt and Michael Fisher (both All-Area HMs) and senior Cole Kendra and junior David Schwab leading the midfield. In a normal year, UP would have been primed to battle with Pottsgrove for Frontier Division supremacy. This year in the 7-team PAC, they can be competitive with the entire league, something many past Upper Perk teams would not have been able to say. “UP expects each game to be very competitive despite the difficulty of the schedule,” said coach Kyle Fisher. If the District 1 playoffs are in the cards for Upper Perk, they’ll be battled-tested like never before to take on the rest of 3A.