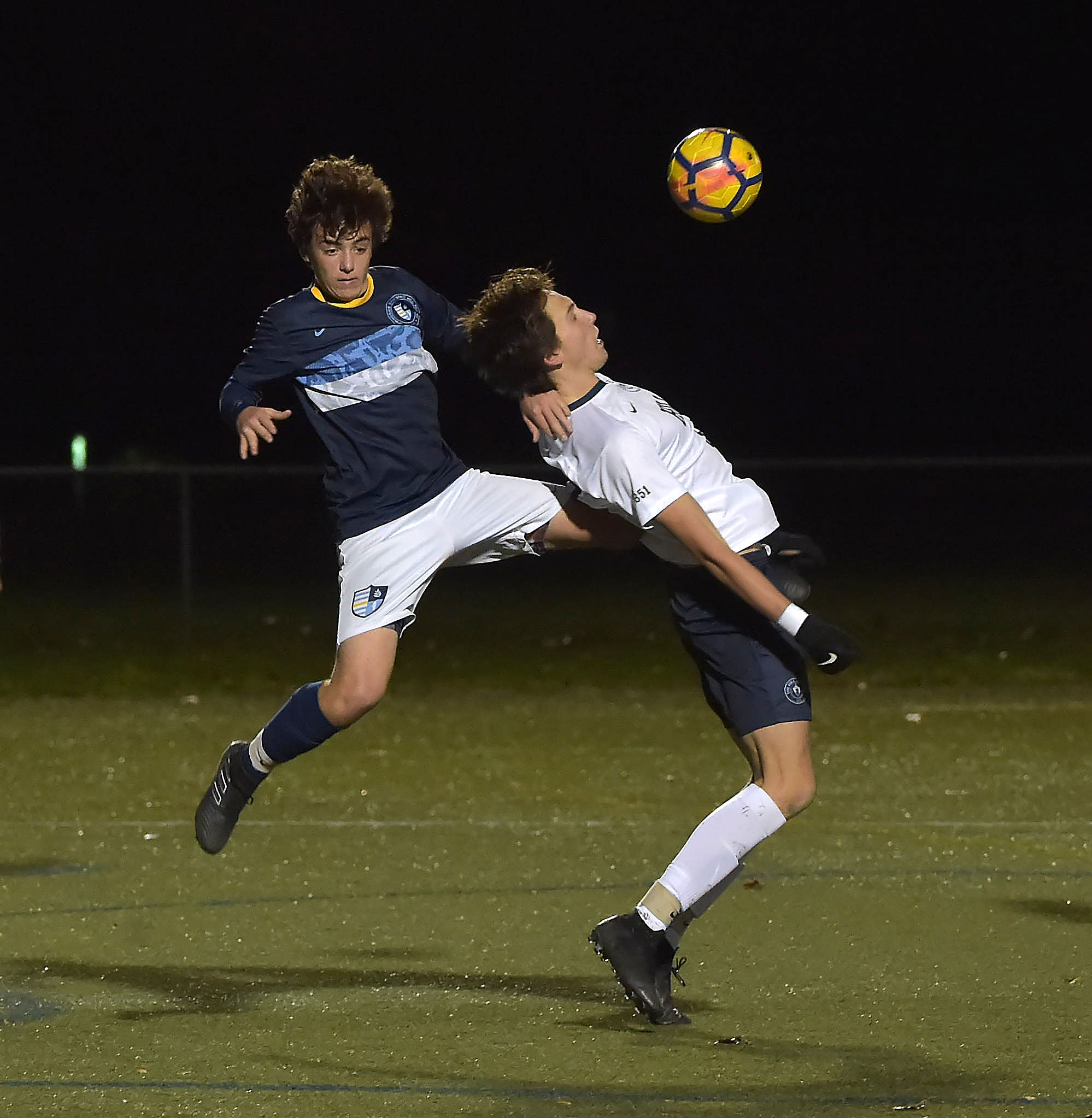 Stuck in the mud, the lights turned out, three crossbars rattled and nothing to show for it.

The Springside-Chestnut Hill boys soccer team could have just decided it wasn’t their night – and in all those ways it wasn’t.

But that turned entirely when SCH got its breakthrough with 18 minutes to play from senior Peter Kapp and the Hillers streamrolled from there as defending champion Springside-Chestnut Hill Academy defeated Hill School 3-1 in the Pa. Independent Schools Athletic Association championship Wednesday night at Immaculata University’s Draper Walsh Stadium.

As the front-running teams of the PAISAA tournament over the last two years, an unexpected rivalry has formed between SCHA and Hill.

“Last year, Hill beat us in the regular season so they had an edge on us. This year we beat them in the regular season so it’s been back and forth,” Burckhardt said, “but at this point for me and the seniors, this being my final game … I love these guys and we’ve been through a lot. But we’ve been on a roll here lately and finally beating Hill again is an amazing feeling.”

Hill School (13-8) settled for silver for the second straight year while maintaining its run of reaching the final in all but one year of the PAISAA’s existence – champions in 2013, 2014 and 2016; finalists in 2011, 2012 and 2017. Hill entered riding an eight-game win streak that featured a perfect run in the Mid-Atlantic Prep League, the Blues’ first league trophy since 2013.

“It was a tough time for us to not play one of our better matches, but considering we were (3-6) to come out of that and rattle off as many straight as we did, we hoped we had one more half in us,” Hill School head coach Chris Drowne said. “Unfortunately we come up one half short.

“Everybody says that you have to appreciate the journey. A lot of people that just consider it a birthright to be in the final four of this tournament, or the final match, don’t appreciate how much work it takes or how many quality teams there are in this draw that you have to go through.”

The day seemed like it was adding up bits of adversity for the Hillers: their team bus got stuck in the mud on the way to Immaculata. A chance-filled first half was only broken up by a power outage of the stadium lights in the 18th minute. Once back on after a 15-minute delay, both teams were on their games, junior forward Zach Barrett and senior midfielder Hale Lombard leading the Blues’ charge while seniors Dane Harmaty, Luke Greenberg and Burckhardt led the Hillers’ thrust.

Greenberg hit the crossbar shortly after the restart and was frantically cleared by Hill, which led to a counterattack that saw freshman substitute Toole carry down the right side and go near post for the 1-0 advantage.

Barrett was inches from making it 2-0 when Lombard played him behind the defense but his shot on the breakaway hit the left post.

“The first half and right through halftime I thought we did a great job in all three thirds of the field,” Hill coach Chris Drowne said. “We created some chances but didn’t finish enough of them and when you leave a team that is that dangerous in the match, they are going to break through. They deserved the breakthrough.”

Hill’s senior center back pair Euan Forrest and Aidan Sullivan were strong throughout, but as the game wore on, the Hillers were stronger – provided the goal frame would finally cooperate.

“I kept on looking at the clock and the time kept ticking on down,” said Burckhardt, who will play at Drexel next year. “But then when we got the first one, it was an amazing feeling especially when my fellow senior and one of the best friends gets it. I knew with the crowd going wild that at that point we were gonna get another and finish it for sure.”

Once Kapp got SCH on level terms, the Hillers were on fire. Burckhardt missed a great chance with 13 to play, but made good minutes later on the follow of a left-footed shot from Harmaty, who got himself some space with a beautiful Cruyff turn on the edge of the penalty area.

SCH sealed it on a give-and-go counterattack breakaway between Burckhardt and Scott Bandura to put the game to bed.

The celebration was on for the Hillers and their large student section and capped a 16-4-1 season. The SCH senior class included Burckhardt, Harmaty, Kapp, Greenberg, goalkeepers Owen Elliott (2 saves), Kieron Cook (1 save) and Nate McDowell, Patrick McHugh, Nick Dolente and Jack Myers.

“It’s the smallest senior class we’ve had in my time as coach, but certainly impactful in terms of how they led every single day and the final results they knew they wanted to post, how hard they worked to make sure everybody appreciated the level it takes to do so,” Drowne said.