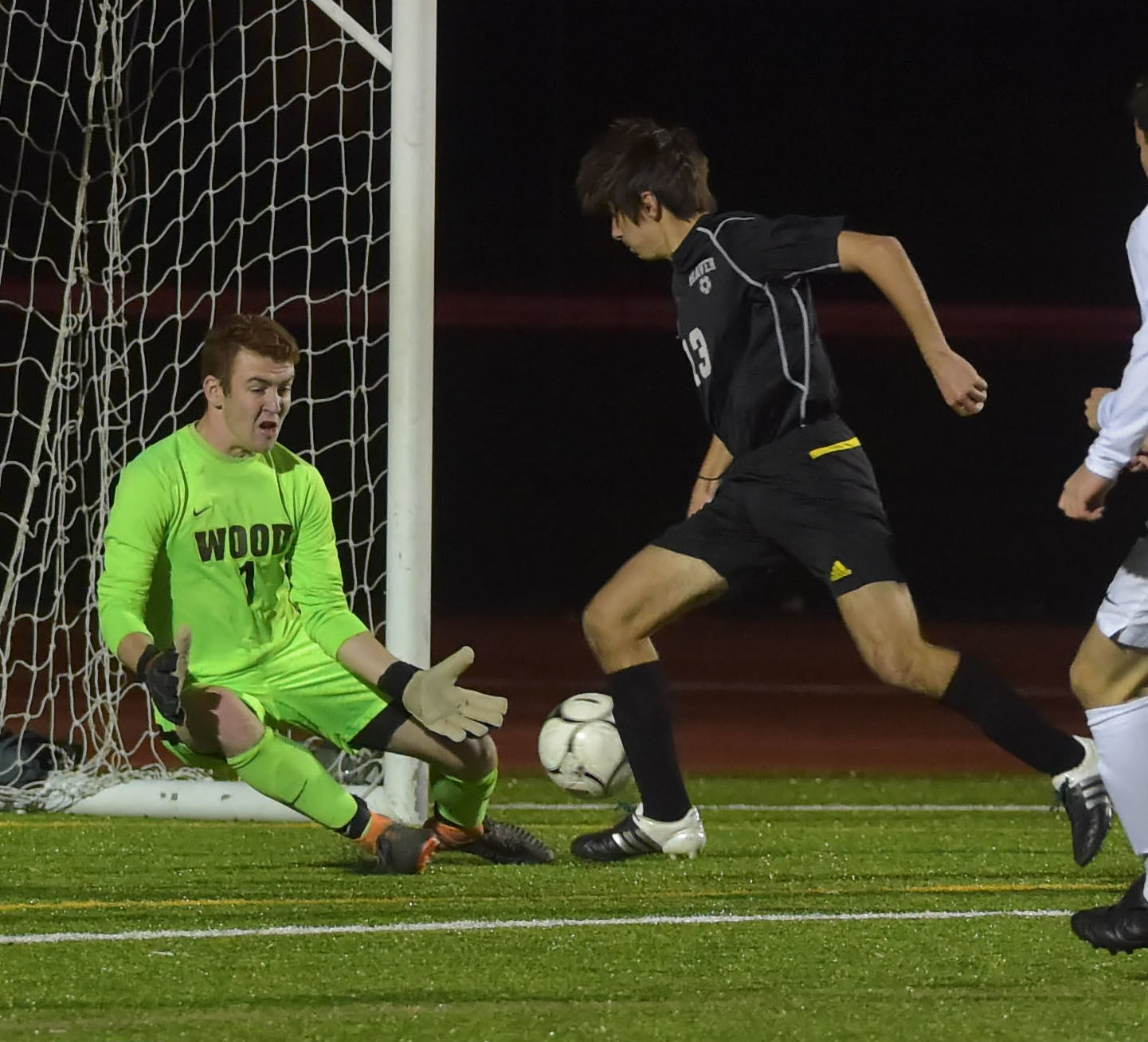 WEST GOSHEN — Some soccer teams park the bus, stacking 10 players behind the ball in search of a 1-nil win. Others, like Strath Haven, take the bus, cut the brakes and race it downhill.

The Panthers have taken an offensive ride, full of counterattacks and quick strikes through the PIAA Class 3A tournament, and kept the wild ride going Tuesday night with a 3-2 defeat of District 12 champion Archbishop Wood at West Chester East High School.

Strath Haven trailed 2-0 1:07 into the second half before rallying for three goals. Nick Palermo scored twice, and Nate Perrins headed home the winner, his 15th goal in six postseason games.

“At the end of the day, that speed, that momentum wave we’ve ridden has done us well every single time,” Panthers coach Ryan O’Neill said. “It’s gotten us here. This is who we are now. And it’s been successful.”

Haven could not have gotten off to a worse start. Ryan Morgan fired the Vikings in front midway through the first half. Wood doubled its lead just after the break when Joe Baranoski played a long, hanging ball into the Panthers’ penalty area.

Haven defender Simon Bolinger misjudged his jump and sent his header over his keeper, Noah Atsaves.

On the other side of the field, the Panthers failed to string anything together. Palermo had a chance in the first minute, but every other look came from well outside the 18-yard box.

Still, the Haven offense lurked. The club hadn’t been shut out all season. And Tuesday would be no different.

“One of our messages, you always have to keep your head up, keep battling,” Perrins said. “And good things will come out.”

Palermo led the charge. Following the own goal, he made a run down the left side. Perrins played him into space and Palermo did the rest, sprinting toward the Wood goal and sending keeper Connor Ford the wrong way.

“I thought (Perrins) played a really good ball,” Palermo said. “I saw the lane open, so I tried to go back post. I kind of whiffed it and went near post, but the goalie guessed back post. Which is kind of lucky.”

Thirteen minutes later, the teams were even at two. It came on a throw-in, a Perrins’ flick-on and a loose ball that found its way to Palermo. He buried it.

The senior had come up big in a similar spot last spring, when he scored the overtime winner in Haven’s run to the PIAA Class 2A lacrosse final.

“He had a big day,” Perrins said. “Something about semifinals and states and him.”

Palermo was involved in the winner as well four minutes after his equalizer. He made another trademark sprint along the sideline, drawing a foul inside the Vikings’ half. Emmet Young stepped up to deliver the free kick, and he played it perfectly. The ball pulled Ford from his goal, but it also invited Perrins. Perrins met it, turned and watched the ball bounce into a vacant goal.

It had to be him. For all his goal-scoring prowess, Perrins was bottled up for the first 40 minutes of the semifinal. The Wood defense stepped to him at every opportunity, limiting his space. Seeking the ball, Perrins dropped deeper and deeper into the midfield. But after halftime, he found a way.

Perrins’ go-ahead goal left the Panthers in a somewhat uncomfortable position: they had to defend at all costs, having spent all season attacking.

“It was heart-wrenching,” O’Neill said.

He had a formula, though. Perrins dropped back to sit in the defensive midfield and win head balls. Nick Palermo, Gavin Birch and Peter Boerth ran like madmen up top to disrupt the Vikings’ possession. And captain Vincent Palermo, Nick’s twin brother, held strong in front of Atsaves.

“We just needed to take away their space,” Vincent Palermo said. “We stuck them when they got it, and we played offense the rest of the game.”

The defense was remarkable. Wood fired six shots in the second half, but only the own goal found the target. Bob Hennessey pulled an attempt wide with 2:47 left and there was a hopeful penalty shot not too long after. That was all the Vikings (19-5) could muster.

“Coming into this year I knew we had the capability of going this far. I told Ryan that,” Perrins said. “Maybe he didn’t believe me at first, but now he does.”

Haven (16-6-2) earned its first berth in the state championship since 2001. The Panthers will take on West Allegheny at 6:30 on Friday night at Hersheypark Stadium.

The win was particularly special for O’Neill, who was emotional following the final whistle. He was the Daily Times Player of the Year when the Panthers won it all in 1995.

“Thirteen years of being through so much, being up and down a few years. This team deserves this,” O’Neill said. “Even going down two goals today, and keep doing what we’ve been doing. And it paid off. I am truly humbled by our support and the amount of emails and texts and communication that I’ve had.”