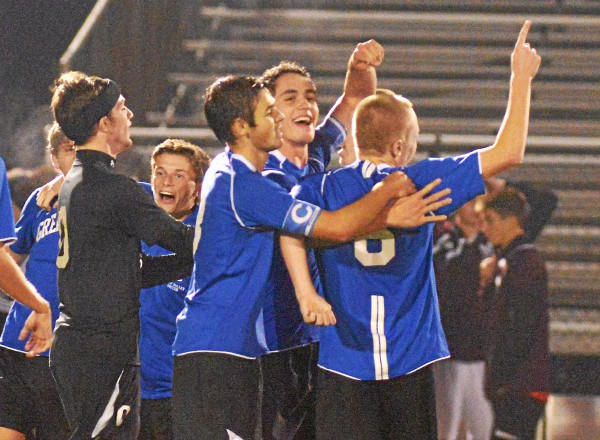 The closest comparision to a Cinderella story in Pennsylvania high school boys soccer has been Great Valley over the past month.

The Patriots entered the District 1 Class AAA tournament as an afterthought to advance far in the tournament, despite the prestige the program has built over the last three decades.

Seeded 15th, Colin Deitch and Great Valley took that ranking to heart knowing their team was better than their record and the power rankings indicated.

“We knew we were definitely underseeded,’ Deitch said after Great Valley’s PIAA semifinal win Tuesday. “Ever since we were upset last year (in the state semifinals), our goal was to make it back to this point. And here we are.’

Great Valley has rode a hot streak, winning seven of eight games to a runner-up finish in District 1 and winning the Eastern bracket of the PIAA tournament.

Now comes the final hurdle for the Patriots as they set to face Peters Township in the PIAA Class AAA championship game tonight, 6:30 p.m. at Hersheypark Stadium.

After defeating Reading in the PIAA quarterfinals, Jack Hajnik felt there was less pressure for Great Valley during this playoff run.

Unlike the 2013 season, where the Patriots were undefeated heading into the state playoffs. They were the team to beat,

“I love being the underdog,’ Hajnik said. “We’re not that team to be taken down now. When we were 24-0 (last year), we were the team to beat. Every team gave us their best game. That was their game of the year. Being the underdog, it’s a little, better, little easier and a lot less pressure.’

Great Valley certainly will carry that underdog role into the PIAA title game tonight against Peters Township, the Western Pennsylvania Interscholastic Athletic League (WPIAL) champions out of District 7. Peters Township is seeking its fourth state title and their first since 2007.

The Indians (21-2) are on a ten game winning streak with their last loss coming to Upper St. Clair, the two-time defending state champions, on October 2. Leading the way for Peters Township has been striker Mario Mastrangelo, who leads the team with 24 goals this season, inclding a hat trick in the Indians semifinal victory over Lower Dauphin Tuesday.

Peters Township also has a strong back as the Indians have recorded 17 shutouts this season. They have outscored their opponents 18-1 in the playoffs and have not allowed a goal throughout the state tournament.

The Patriots are seeking their fourth state title and first since 1993. Great Valley and Peters Township met in the state final once before, playing to a 0-0 tie in 1989 in the Class AA title game and declared co-champions in the process.

This matchup will have a winner and could be an historic one for Great Valley and Moffett.

With a victory, Moffett will win his first state title and win his 239th game with the Patriots, the most in program history.

But Moffett doesn’t want the accolades for himself. He knows tonight belongs to his players.

“That wasn’t a point for discussion,’ Moffet said. “I could care less about the record. The boys worked hard to get to this point and the focus will be on them. They deserve this.’

MOORE: My job depends on high school sports, and I still don’t think they should be played