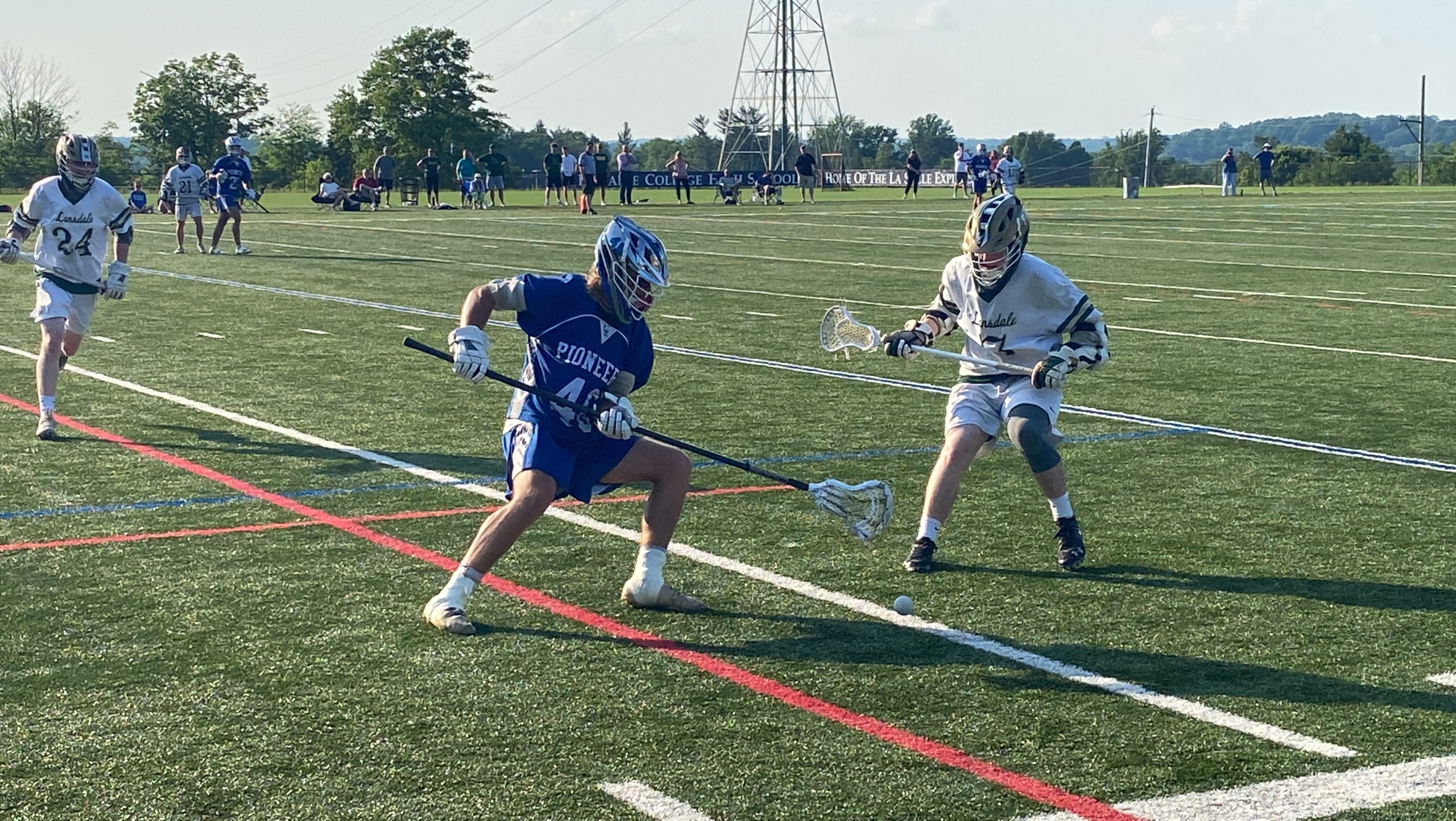 SPRINGFIELD >> After spending most of a hot Tuesday chasing down Lampeter-Strasburg, the Lansdale Catholic boys lacrosse team had a chance to grab the lead in the final minute of fourth quarter.

And just before the horn sounded, Mikey Kleinert ripped a low shot that could not find a way past Pioneers goalkeeper Bryce Thomas, sending the PIAA Class 2A first-round contest to overtime tied at nine.

The Crusaders never got another opportunity. Lampeter-Strasburg got the draw and 21 seconds into the extra session Stewart McClain scored off a pass from Colin Sullivan to end LC’s season with a 10-9 loss at La Salle College High School.

“That shot from Mikey goes in on a lot of goalies and we’re having a very different conversation right now but that’s all you can ask for at the end of regulation – having the chance to win the game,” Lansdale Catholic coach Mark Princehorn said. “We had it, we executed, their kid made a play.”

Connor Mann had three goals to pace District 12 champ Lansdale Catholic, which lost in the PIAA first round for the second consecutive season. Flannery and Patrick McKeever each had two goals and an assist, Patrick Cooney scored twice while Colin Corbett had two assists.

“We’re back-to-back district champions, we’re back-to-back state playoffs appearances,” Princehorn said.” Last year was a very lopsided score, this year overtime game could go either way so we are getting there. And for me, I don’t want winning a district title to be the culmination of success. I want these teams to expect to be in states as district champions and expect to try and make a run. And this team definitely embodied that.”

The Crusaders trailed by two goals twice in the fourth but rallied back to pull level each time. Down 9-7 with 7:21 left, McKeever came around the net to bounce a shot in at 6:21 while Flannery scored off a Colin Corbett assist to knot things at nine with 4:50 to go.

“I think we just found that extra gear,” Flannery said. “Looking at our seniors, a lot of people going, so I think we just looked them in the eyes, we knew we wanted to continue, we had to fight as hard as we could.”

LC went down a man with 1:27 remaining but regained possession and called timeouts with 36 and 22 seconds remaining in the fourth.

A McKeever shot on a dodge was denied by Thomas and went out on bounds at the sideline but the Crusaders got one last chance with nine seconds – Kleinert’s effort unable to get by Thomas. McClain proceeded to tally his fifth early in OT to give the Pioneers the victory.

“I think we had two pretty good looks,” Princehorn said. “Luckily we had two timeouts to burn so we killed the penalty then we were able to set something up and we had a good look. We made a smart decision not to force it, had another look that we put in off of the first play and Mikey Kleinert had a clean look at the goal, kid made a save.”

Mann scored just 54 seconds into the game but the rest of the first quarter went Lampeter-Strasburg’s way. Sullivan came around the net to make it 1-1 at 7:24 before back-to-back goals from McClain put the Pioneers up 3-1 at 3:10.

A Gavin Denlinger strike off a McClain assist at 1:19 had Lampeter-Strasburg leading by three after the opening 12 minutes.

“We had some problems with some penalties early and gave them some advantageous situations on man-ups that they capitalized on,” Princehorn said. “You can’t do that. We gave up some easy clears and then we turned the ball over on clears so again going back to that what I first noted is it’s tough to pull ahead or to really win a game when you make those mistakes and you have limited possessions.”

Mann’s goal with 5:03 left in the half ended the Pioneers’ run with the Crusaders cutting the margin to 4-3 just before the break as Cooney scored off a Corbett assist with 13 seconds.

“I think we just got out slow,” Flannery said. “I think we were expecting it and then once we hit a few we really caught our stride.”

A McKeever goal at 9:18 in the third pulled LC even 4-4 but McClain found the back of the net off a Sullivan assist at 7:45 with Sullivan scoring 17 seconds later to put the Pioneers up 6-4.

McKeever connected with Cooney at 1:57 before McClain collected his fourth of the contest at 1:37 to give Lampeter-Strasburg a 7-5 heading to the fourth.

“I know our guys are fighters,” Princehorn said. “I run them hard, I play them tough, coach them tough so they’re not shy to tough moments, they’re not shy to adversity. You look at our schedule and it is very difficult. Marple Newtown, Souderton, La Salle, Prep, Bishop Shanahan, Upper Dublin, Devon Prep – our kids are battle-tested. So, getting down two goals, even three goals, we’re not phased.

The Pioneers took back the lead 45 seconds later on a Jack Filius goal with Denlinger making it 9-7 at 7:21. But the Crusaders rallied once more – McKeever with a goal at 6:21 followed by Flannery’s equalizer at 4:50.