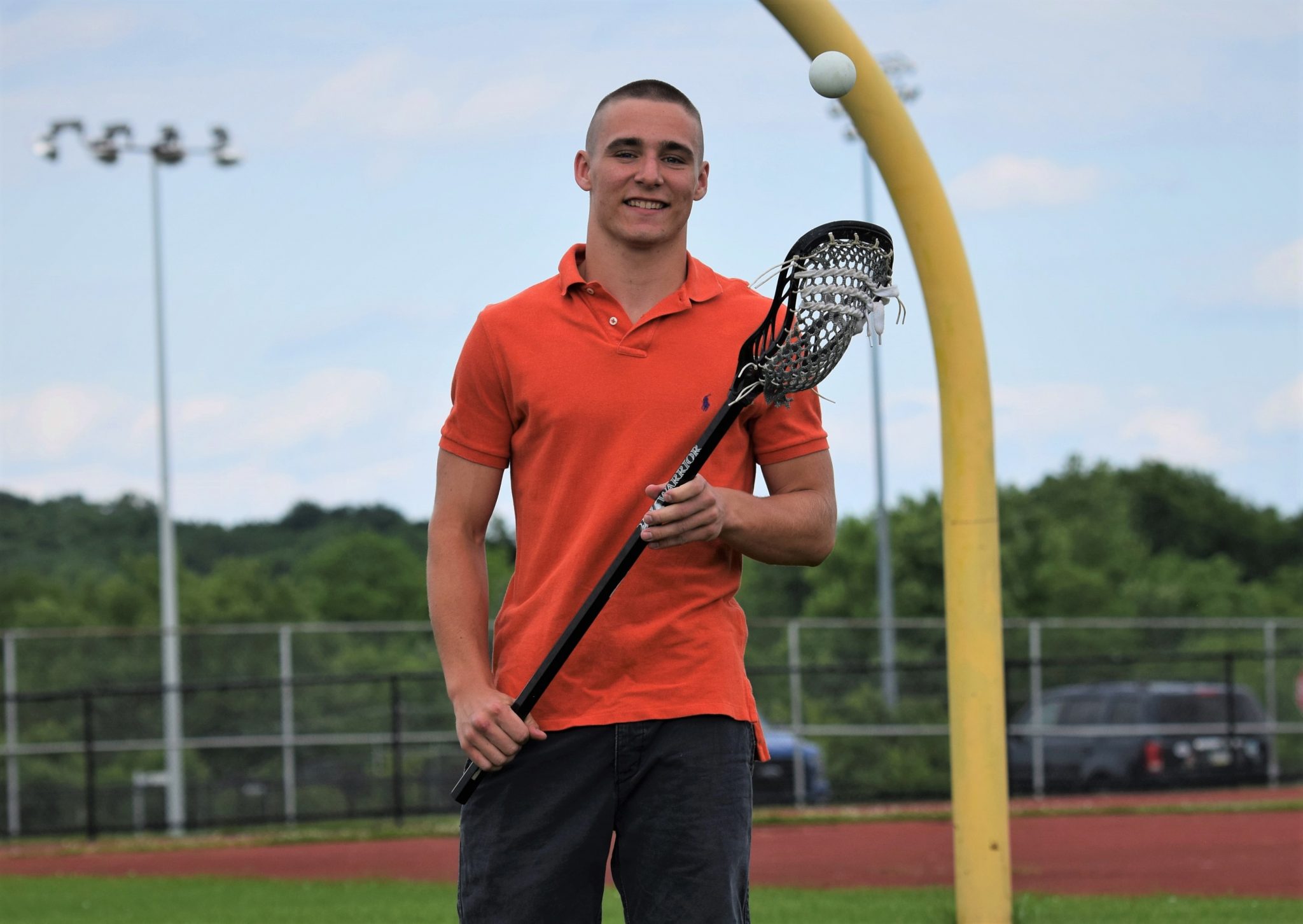 GRATERFORD >> Talk to Brian Fehr and it becomes clear he’s a leader and a team player.

The first of those two qualities comes naturally, but Fehr’s been learning the latter since before he can even remember.

Brian, the youngest of Stephen and Ann Fehr’s three children, spent a generous portion of his formative years attending events where others were the focus.

“Brian tagged along to a lot of places,” admitted his mother Ann, “because his brother and sister were in a bunch of activities.”

But with older brother Stephen Jr. and older sister Caroline active in lacrosse, Brian’s childhood served as a tutorial of sorts for his own lacrosse career — one that would ultimately serve as the youngest sibling’s turn in the spotlight.

Add it all up, and it equals one more honor for Fehr — the 2018 Mercury All-Area Boys’ Lacrosse Player of the Year.

The senior attackman led the Vikings with 46 goals and 39 assists on the campaign. Fehr set the Perkiomen Valley career scoring record on the final shot of his career — a goal in a first-round state playoff defeat against District 1 champion Garnet Valley — breaking the record set by Shawn Coulter, a good friend of Fehr’s who graduated just a year earlier.

“Shawn was my mentor,” Brian explained. “We’ve been good friends since I was in 7th grade.”

Fehr’s school record stands at 228 points after the conclusion of a career that featured 116 goals and 112 assists — a remarkable balance for a high school player. In fact, Fehr registered his 100th career goal and 100th career assist in consecutive games in early May.

Over time, high school stat lines have been notoriously lopsided — prolific goal scorers who struggle to reach even double digits in assists, or setup guys who don’t put the ball in the net much themselves. But Fehr’s nearly 50-50 split between goals and assists underscores not only a change in the sport itself, but the completeness of his own game and development as a player.

“But different players step up, grow into different roles. This year, we had a deep, complete offensive unit … we score, we pass, we all do a little bit of everything. But it took learning from guys like Shawn (Coulter) and others to help develop those aspects of my game.”

After the graduation of the 2017 class, headlined by Coulter, many figured the Vikings were in for a down year in 2018. Those predictions appeared prescient in the early going, as the Vikings stumbled out of the gates. Making matters worse was the extended winter southeastern Pennsylvania experienced, forcing the Vikings to practice indoors for the first 25 days of the season. “Most teams were outdoors practicing on turf,” said Fehr. “But it brought us together. Everyone bought in, we bonded together.”

Just as the Vikings were hitting their stride, a mid-April trip to perennial PAC powerhouse and archrival Spring-Ford appeared on the schedule. The Vikings roared out of the gates that night, grabbing an early 4-0 lead before Spring-Ford stormed back, taking the lead with nine minutes to play and running out the clock to top PV, 7-6.

To an independent observer that night, the Vikings appeared to be the Rams’ equal in all areas but one — a singular belief that they were, in fact, strong enough and good enough to close out a top opponent. The squad would spend the next few weeks building their resolve and coming into their own as leaders.

“We lost a lot of good players (from 2017),” Fehr admitted, “but coach (Bryan) Churchey always tells us that we don’t rebuild, we reload. That tells you about our culture, and that’s what we started to believe.”

“Maybe the most remarkable thing, from my perspective, was that there were no off-field distractions at all this year,” added Churchey. “I’ll be honest, I kept waiting for something … but it never came. That’s what you strive for within your program. Some people might have said this year’s class wasn’t the most talented group, but they’ve certainly been my most team-oriented group.”

True to their name, the Vikings started conquering foes one by one. First up was perennial tormentor Owen J. Roberts, who’d ended PV’s quest for the PAC title the previous three years. With a berth in the Final Four on the line, PV went to Bucktown and claimed an emotional 9-7 victory as Fehr led the way with a hat trick. Two days later, an impressive non-league victory over Penncrest featured Fehr’s 100th career goal.

In the PAC semifinals, not only did PV avenge an early-season loss to Pope John Paul II, Fehr picked up his 100th assist in the second quarter in perhaps the team’s most complete performance to date, a 12-3 decision.

The winning streak would end two days later at Methacton as Spring-Ford claimed their 8th consecutive PAC lacrosse title, but the Vikings’ late-season run was enough to send them back to the District 1 Class 3A playoffs — this time as a top-10 seed, meaning they’d host an opening-round contest. The Vikings got back on track, dominating Neshaminy before upending North Penn the next day to head into the district quarterfinals.

It was there that they’d run into Garnet Valley for the first time, battling back from a 7-3 halftime deficit only to fall a goal short in the end.

“This is our first time ever being at this stage of districts, and for us to be here versus a team that’s been consistently here — the first half didn’t go our way but we didn’t shut down, and the whole second half played a much better game and put ourselves in a position to win at the end,” coach Churchey said after the loss to the eventual district champions.

With the PIAA taking six teams to states from District 1, that meant a do-or-die playback game with Central Bucks West the following Tuesday — the game Fehr identifies as the one he’ll remember above all others from high school. Win, and the Vikings would qualify for states for the first time in program history; lose, and it would be another heartbreaking ending to a season.

C.B. West started off fast for an early 1-0 lead, but the Vikings’ defense stiffened the rest of the way, led by Fehr’s classmate Remy Sell and an impressive 12 consecutive saves from goalie Rob Farrington. By the time Fehr cashed in late in the 4th quarter for his second goal of the day, Perk Valley was well on their way to the state playoffs with a 5-1 victory.

The fact that a high-scoring attackman would remember a 5-1 game — among PV’s lowest-scoring contests of the season — as his favorite game tells you all you need to know about Brian Fehr. While he’s proud of his individual accomplishments, they seem largely meaningless to him outside of a larger team concept.

Fehr was vice-president of the senior class at Perkiomen Valley this past year — yet he’s happier talking about the accomplishments of his classmates and the class as a whole than about himself.

He starred at strong side linebacker for PV’s PAC championship football teams the past two years — yet he’d rather tell you about the year-round hard work of his teammates in the weight room.

So when asking Fehr about the game-winning goal against C.B. West, or breaking the school scoring record, the answer isn’t surprising.

“We started our season (at C.B. West), and it seemed right that we’d end up there in the playbacks,” he recalled. “We didn’t score a goal in the first quarter that day, but our defense locked it down. The whole game was a perfect example of our team-first approach.”

Even after the Vikings’ season and Fehr’s high school career ended in the first round of states in a rematch with Garnet Valley, Brian didn’t spend much time feeling sorry for himself.

“Our defense, they do these things called ‘friendship circles,’” he recalled, “where you huddle up, and you say something nice about the person on your left. I realized it was our last chance, so I asked if I could jump in (even though I don’t play defense).”

“I complimented Remy (Sell) … told him what a great teammate he was, and how glad I was that we’d become friends.

“Really, all I could do after that game was to think how happy I was to have been a part of it. We are leaving this program in a better place than where we found it. The underclassmen are going to take this and run with it.”

With high school now in his rearview mirror, Brian Fehr turns his eyes toward the future. His first stop seems appropriate for a team-oriented, natural leader.

“I’ll probably spend some time working and helping out at football camp this summer,” he said, “then in October, I’m heading to Parris Island to join the Marine Corps.”

As Fehr discussed his future in the Marines, his excitement was evident.

“I thought about playing football in college, then I thought about lacrosse … in the end, though, this (the Marines) was what I most wanted. I like the idea of that brotherhood … once you’re a Marine, that’s forever.”

After a 13-week boot camp, Fehr will return home in early 2019 for about 10 days before embarking upon two months of infantry school. In all, it’s a six-month commitment up front in exchange for a lifetime of brotherhood.

“I always think about Pat Tillman’s quote about sitting around and taking in the liberties — I want to do something to contribute to that,” Fehr explained.

Before joining his next ‘team’ in Parris Island, Fehr concluded with a few words about the next chapter for his teammates — his honorary ‘brothers’—in the PV lacrosse program after a historical season.

“Life goes on … and you don’t see people, or even talk to people as much as you did. But that bond will never be broken. Winning, losing together — it grows lasting friendships and bonds. I’m fortunate to be a part of it.”