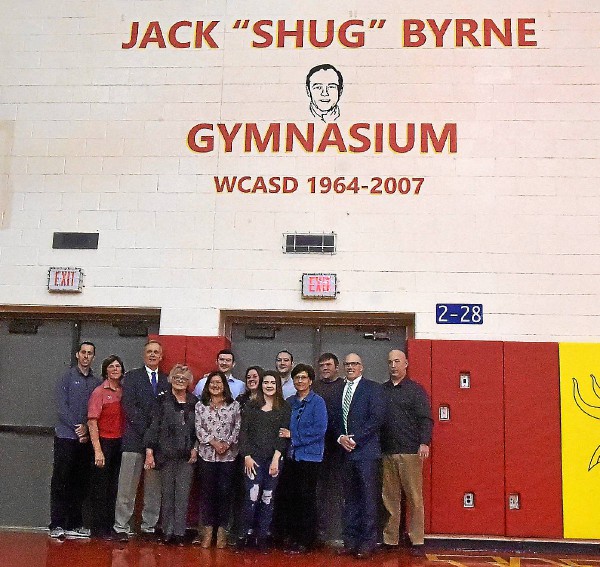 To view a photo gallery of the ceremony, and the basketball doubleheader click here

West Chester East athletic director Susan Cornelius and West Chester Henderson AD Ken McCormick, both of whom knew Byrne for more than four decades, spoke at the ceremony.
“He was willing to help anybody,” said Cornelius. “He was all about the students – teaching them life lessons, working with them on where they wanted to go in life. He always had time to talk to anyone about anything, and his wisdom is something I will carry with me throughout my life.”
McCormick, who played football at East for Byrne in the mid-1970s, said, “He taught me to persevere through adversity, and was always there for support. I wouldn’t be the man I am today if not for him.”
According to McCormick, Byrne received the nickname “Shug” by his physical education teacher as a young student in Philadelphia.
“Jack’s teacher used to call all of the boys, ‘Shug’ because he couldn’t remember all of their names,” said McCormick laughingly. “The name stuck with him.”
While the Byrne ceremony was the evening’s star attraction, second billing would have to go to the West Chester Henderson girls’ team, which upped its record to 16-0 with a 60-33 victory in the opener of the twinbill.
The Warriors were led by senior co-captain Abbey Shea (career-high 26 points) and junior Grace Ferguson (12 rebounds, 18 points). Henderson also got fine plays from its guards – senior co-captain Maddie DePrisco and junior Erin Thompson combined for 12 assists, and senior co-captain Erin Torrance scored eight points.
“We really worked as a team tonight,” said Shea, who bucketed a dozen field goals (no treys). “We have good guards – Maddie and the two Erins – who set up our scoring plays, getting by people and getting good angles to swing passes to us. Grace and I were able to find openings by using our size.”
Henderson bolted out to an 18-4 first quarter lead against East (5-11), highlighted by some strong inside play by Ferguson. In the second quarter, Ferguson and Shea (who scored 12 points in the second period), kept working their way underneath, and often tallied immediately after receiving pinpoint passes.
“I was pleased with our big girls – we have some size, and we were able to box out,” said Henderson head coach Greta Neff. “Going against West Chester East is always a good rivalry, and there’s some added grit [in our performance] against them. Our kids have been working hard this season, and doing the little things right. When they pay attention to details like they’re doing, it’s fun for me to coach.”
West Chester East scoring was led by junior Marissa McDonald (16 points), and freshman Lauren Klieber (12 points, all in the second half).
East head coach Erin Listrani said, “We were facing a great team in Henderson tonight. The last time we played them [Dec. 22], we lost by only nine points with a late rally; but tonight I thought we didn’t start the game with as much energy as we had that night.”
Listrani also paid tribute to the biggest star of the night, Byrne.
“He was a real pillar of the school district and the community, and it’s a real honor to have our gym named after him,” said Listrani. “He gave me some great advice on coaching – he said to ‘stay passionate.’ He loved my passion.”
At the ceremony, the entire southwest quadrant of the East gym was jam-packed with Byrne’s family, friends and East alumni. Speakers included Cornelius, McCormick, West Chester East principal Dr. Kevin Fagan and West Chester Area School District Superintendent Dr. Jim Scanlon, and they all paid tribute to Byrne, who had been inducted into several local Hall of Fames – Ches-Mont League, Killinger and Chester County.
Following the ceremony, the West Chester East boys’ team defeated Henderson, 53-40.
“We won it for Jack,” said East boys’ basketball head coach Tom Durant. “I knew him when I was a coach at Penncrest in the 1990s, and he was all about the kids, doing it right and being competitive.”
The Vikings (7-9) held a precarious 21-19 lead at halftime, and Durant used the memory of Byrne to stimulate his players.
“We were outrebounded in the first half, and I told the players at halftime, ‘Jack wouldn’t like that,’” said Durant, with a laugh. “We started outrebounding Henderson in the second half, and the Carr brothers [senior co-captain Alexander Carr and sophomore Andrew Carr] turned it on the second half. Our energy level was good tonight – of course, it’s going to be good when you play a rival like Henderson.”
Durant also praised junior point guard Gibby Trowery, who led all scorers with 14 points. The Carr brothers combined for 14 points, and Tym Richardson tallied 10.
Henderson senior Joe Saulino led the Warriors with 11 points, while junior Luke Wierman added nine and senior Brady Bash eight.