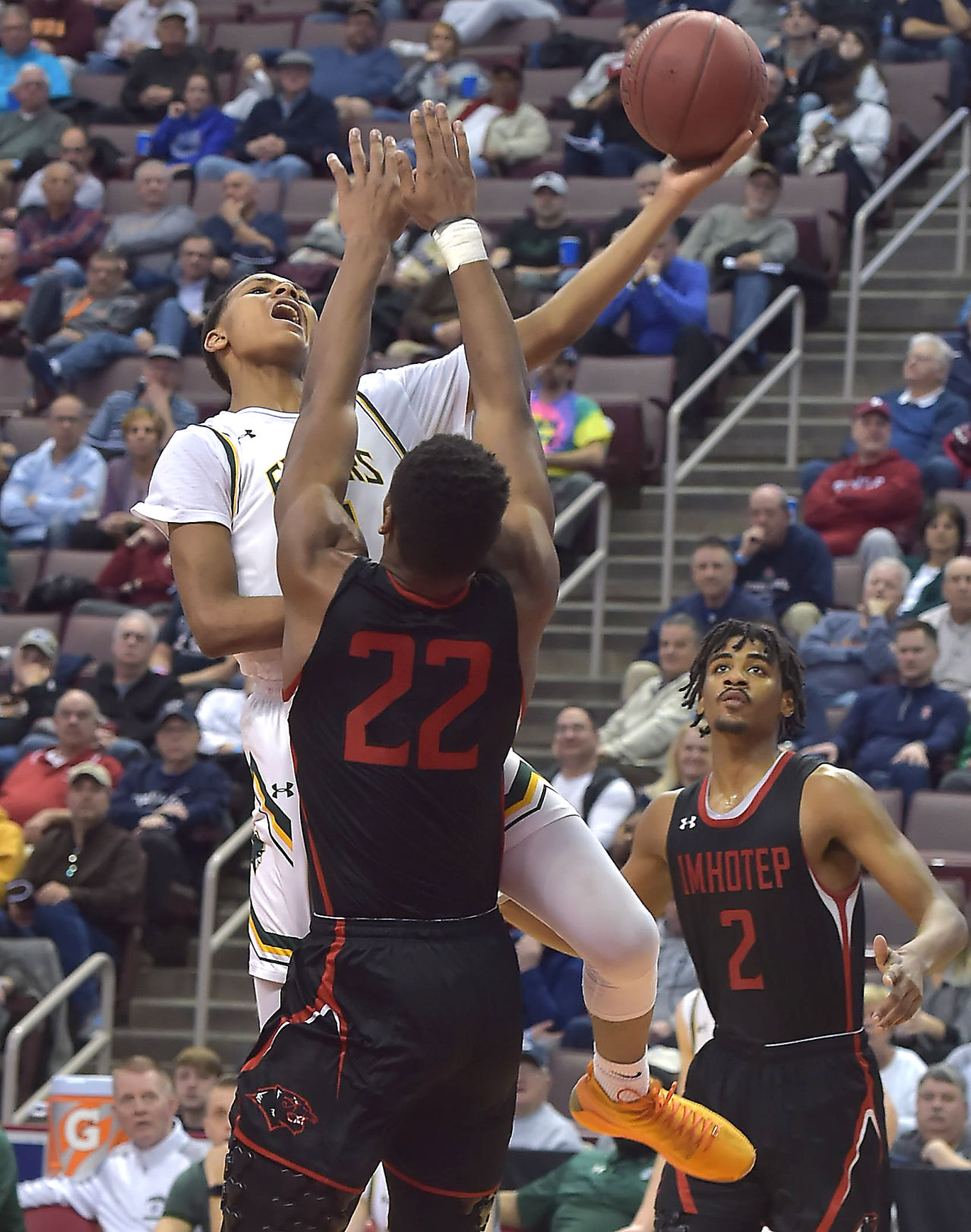 Bonner-Prendergast's Tyreese Watson, left, is called for a charge in the fourth quarter of the 2019 PIAA Class 4A final against Imhotep Charter's Elijah Taylor at the Giant Center in Hershey. Both players were named to the Class 4A All-State team by Pennsylvania sportswriters Thursday. (Pete Bannan/MediaNews Group)

Tyreese Watson inherited a tremendous mantle in 2019. Gone from Bonner-Prendergast’s recent hoops ascent was Isaiah Wong, a 2,000-point high school scorer off to the University of Miami. Gone was Wake Forest’s Tariq Ingraham.

And under Watson’s steady stewardship, those losses hardly mattered.

Watson, who helped lead the Friars to the quarterfinals of the PIAA Class 4A tournament before the coronavirus pandemic pulled the plug on the season, was recognized by Pennsylvania sportswriters as a member of the first team All-State Thursday.

Watson, an All-Delco, averaged a team-high 17.5 points per game for the 20-5 Friars. Bonner-Prendergast won the District 12 Class 4A championship by beating Imhotep Charter. It was on the way to adding a possible state title to a storied generation of players, winning its first two states games by an average of 36 points.

Watson was injured as a sophomore when the Friars fell in the Class 5A semifinals in overtime to Abington Heights and part of the team that lost to Imhotep in the 2019 Class 4A final. Watson, who is fielding low Division I and Division II offers, averaged 5.9 rebounds and 4.0 assists per game and shot 45.2 percent from 3-point range, earning Delco’s only spot on the All-Catholic League first team.

Camden is an undeniable talent, though the junior’s potential hasn’t yet flourished consistently on the high school stage. It’s still enough to attract offers from such blue-chip programs as Syracuse, Penn State, Florida, Miami and Temple.

Camden was a third-team All-Delco and third-team All-Catholic. The 6-7 wing, who transferred from Westtown last year, averaged 16.0 points per game for the youthful Patriots, helping Carroll win 17 games and make the second round of states. Camden hit 72 3-pointers on the season.

Rodriguez, a second-team All-Catholic and third-team All-Delco, was the kind of energetic spark plug that made Bonner’s balanced attack to good. He averaged 13.3 points per game and hit 32 3-pointers, both second-most on the team. But his dogged defense and rebounding made him an immensely valuable piece all over the court.

Jordan Longino, a 6-4 junior guard at Germantown Academy, is the Class 4A player of the year. The major-college recruit in basketball and football averaged 22.9 points per game to go with elite playmaking, rebounding and defense.

He’s the 46th-ranked high school junior in the country, with scholarship offers from Villanova, Indiana, Virginia, Florida, Maryland, Penn State and others. He was also first-team all-state last season. In football, he threw for more than 2,000 yards, with 16 touchdowns and just four interceptions last fall.

The 4A first team is a rare squad that isn’t guard dominated, beyond Watson and 5-11 Donald Whitehead of Hickory.

Whitehead’s team was 23-4, made the state quarters, and won the District 10 title for the second straight year. He averaged 21 points per game and finished his career with 1,837 points.

Also on the first team are Imhotep 6-8 senior Elijah Taylor and 6-8 senior Caleb Dorsey of The Hill School. Taylor is a Notre Dame recruit. Dorsey is signed with Penn State.

In addition to Longino, repeat all-staters include Whitehead and Jake Kelly, a 6-3 senior swingman from Bishop McDevitt (Harrisburg).

The 4A coach of the year is Brendan Stanton of Pope John Paul II, who took over a losing program two years ago and went 20-5, won the District 1 championship and reached the state quarterfinals.