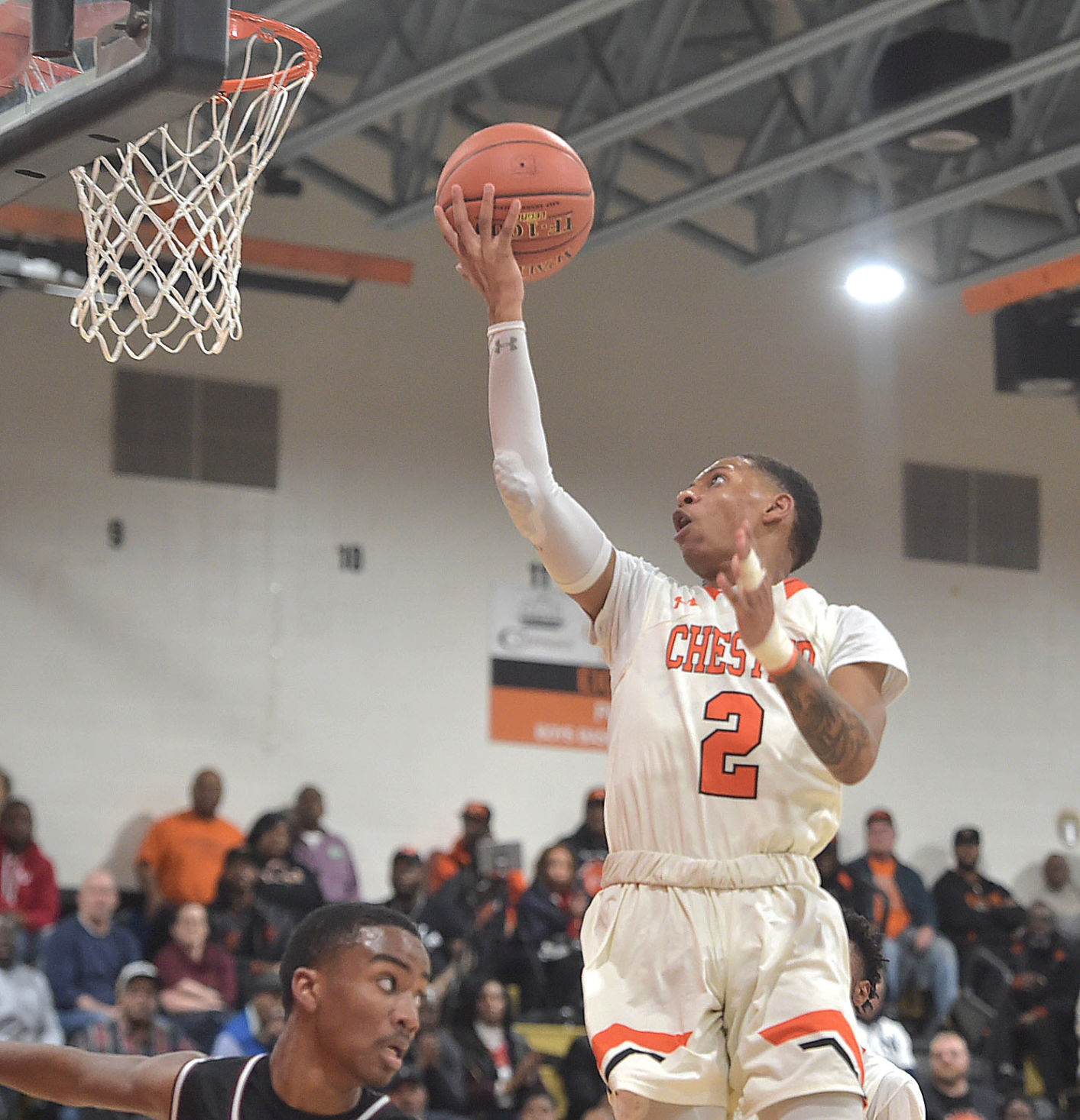 Chester's Rahmee Gilbert goes to the basket against Lower Merion in the second half of District 1 6A quarter finals Friday evening. (Pete Bannan/MediaNews Group)

CHESTER — If you were measuring just the battle of the bigs in the first half Friday night, you might’ve thought the scoreboard at the Fred Pickett Memorial Gymnasium was a little off.

On one side, Lower Merion’s sensational 6-9 sophomore Demetrius Lilley was dominant, accounting for 13 points. On the other, Chester’s 6-7 Karell Watkins was just OK, by his lofty standards – four points, four boards, as many baskets made as he’d had attempts swatted away by Lilley (two).

Chester’s Karell Watkins, left, goes to the basket against Lower Merion’s Demetrius Lilley. Watkins scored 13 of his 23 points in the fourth quarter to lead the Clippers over the Aces. (Pete Bannan/MediaNews Group)

But Watkins had the last laugh, with Lilley rooted to the bench, in a battle of underclassmen who seem destined to stamp their names in the history book of District 1’s most exalted rivalry.

Watkins was unstoppable in the fourth quarter, scoring 13 of his game-high 23 points in the frame as Chester withstood a run by Lower Merion to pull out a 54-46 win in the District 1 Class 6A quarterfinals.

Fourth seed Chester (21-3) books a date next Tuesday at Temple against top-seeded Methacton, which downed Pennridge, 64-69, in its quarterfinal Friday. No. 5 Lower Merion (18-7) is in to states but drops into seeding playbacks.

It was a slow start for Watkins, despite Chester leading by six at halftime. But as he has so many times this season, he turned it on in the second half.

“Phenomenal,” Chester point guard Rahmee Gilbert said. “He does this every game. This is what he does.”

Ride, he did, on the way landing Lilley on the bench. Lilley had just one foul in the first half while tagging six on the Chester duo of Zahmir Carroll and Shaquan Horsey, with Watkins’ foot speed making him a better matchup for a perimeter player. But all four of Lilley’s fouls in the second half came while jousting with Watkins in the lane.

“I just play physical,” Lilley said. “Their guy also had a good game, so I’m just working hard during the game.”

The most pertinent passages of play involved the two big men. Lilley missed an easy basket at the rim on the first possession of the fourth quarter, and a pinpoint feed at the other end by Akeem Taylor led to Watkins going right at Lilley for an and-1. When Lilley scored to put LM within one point for the final time at 38-37, Watkins answered by hitting two at the line the next trip down.

With 2:40 left, Watkins drove at Lilley, who fouled him as his shot rolled up and in. Watkins hit the free throw, Lilley sat and the Chester win was safe with a 47-40 cushion.

“I just stayed focus, I did what I had to do, I played my part,” Watkins said. “And when I knew the big guy (Lilley), I noticed he got out of the game and I noticed that was the only threat to me, so I just played my game and let the game come to me, and this is the outcome.”

Watkins, who scored his 1,000th career point in the second-round win over Haverford Tuesday, finished with 23 points and 11 rebounds. He had 13 and six in the fourth quarter alone.

It mirrored Lilley’s first-half output: 13 points, seven rebounds, two blocks. But Chester still held a 25-19 lead at half in part because it shackled LM’s Sam Brown. The freshman sharpshooter, who returned from a long injury absence Tuesday, had just four points at the break on 1-for-5 shooting. He finished 4-for-14, including 3-for-11 from 3-point range, for 13 points. And the son of Sixers’ coach Brett Brown is probably glad to rid the white-jerseyed shadow he had most of the night, in the form of Gilbert.

At every turn, Gilbert had his hand in Brown’s face. Fareed Burton, who returned from three games out with injury, and Faheem Berry took shifts, but Brown was primarily Gilbert’s responsibility. And he fulfilled the job with aplomb.

“They just told me, deny him at all times,” Gilbert said. “We practiced denying him in practice all week long to prepare for him because we know he can pull up as soon as he crosses halfcourt basically. So I just wanted to not let him get off as many shots as he can get.”

Brown’s first make was the spark for LM’s rally. Chester led, 31-21, and looked set to take the game over when Gilbert pocketed a steal. But he collided with and dribbled the ball off the foot of Berry, letting LM’s Phil Cook take possession and find Brown alone at the top of the key in the hectic transition. That triple, at 4:02 of the third, was his first, setting off three makes in four attempts as the Aces closed the frame on a 11-2 run.

“Every time we come down the court, they say I should get the ball, just to run the offense through me,” Lilley said. “Sam had a great game, he started off a little slow, but he picked it up. When he’s hot, we feed him, and when I’m hot, they feed me.

Brown’s last make with 6:51 left to play brought the teams even at 35, but LM would never nudge ahead.

But with Watkins heating up and the guards doing the defensive job, Chester didn’t waver late.