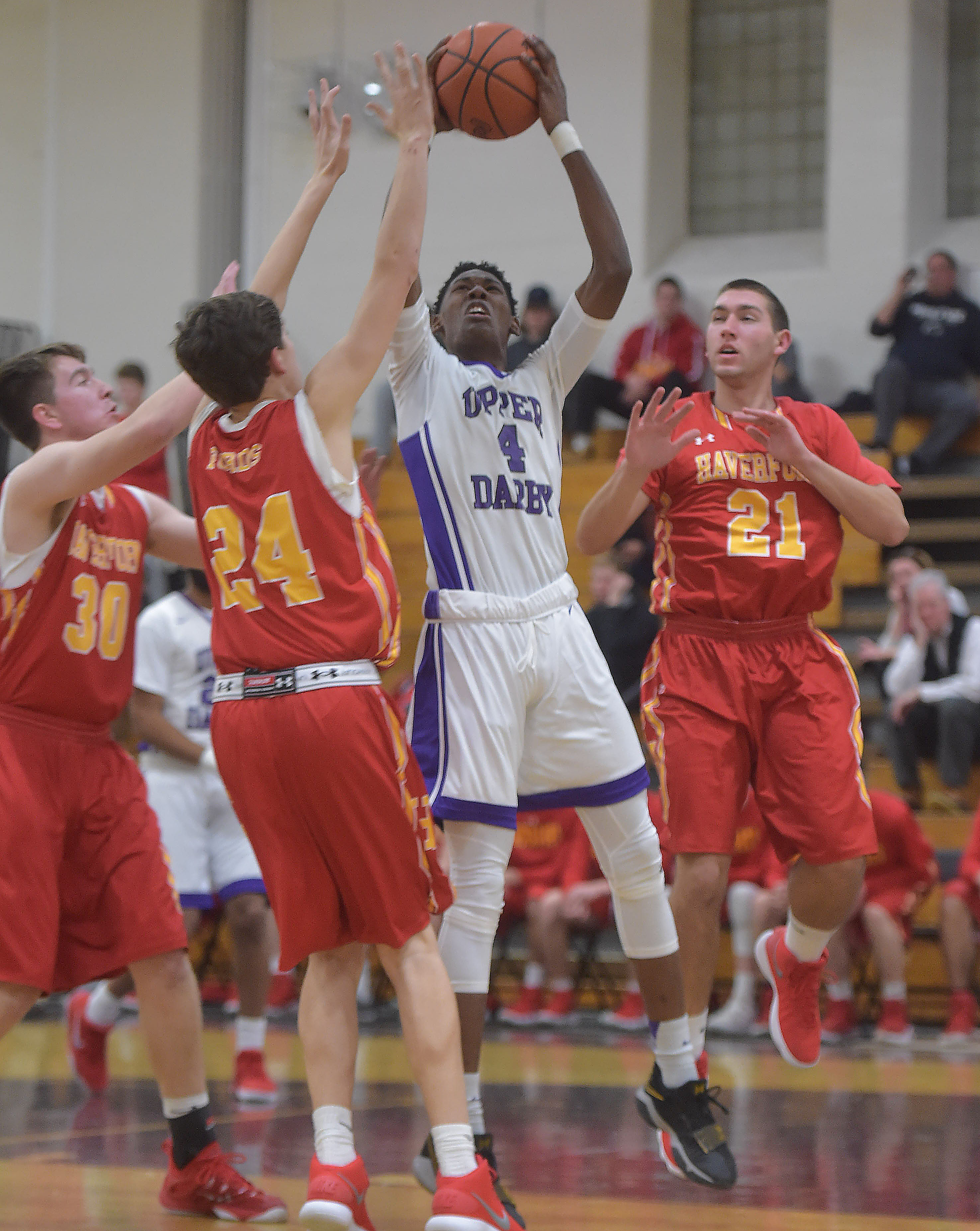 HAVERFORD — In the two years since Springfield’s last visit to Haverford, the situations for coaches Kevin McCormick and Keith Heinerichs have flipped 180 degrees.

Then, in December 2016, the Fords tasked a group of freshmen and sophomores with navigating what became a one-win season. The Cougars were on the path to a state tournament berth.

Two seasons later, as the pendulum of time and the vagaries of age-group cohorts have swung, the roles were diametrically reversed Saturday. On one side was Heinerichs with a team in District 1 Class 6A playoff position. On the other stood McCormick, before a bench lacking a senior, staring at a 15th straight loss.

After spotting the Fords 22 points, that loss fell duly into place, a 66-36 victory for Haverford in an odd, frame-shifted before-and-after portrait.

Jake Ruane the corner 3 to beat the buzzer. Scoreboard is in the top corner and its not going well for Springfield, let’s just say that. pic.twitter.com/bFDwo2W0eb

Six contributors to this Haverford team endured that 1-21 campaign, and the result is a stronger core that has matched the win total from last year with eight games left. The Fords (8-6, 5-5 Central) entered seeded 21st in the district, which would earn a spot in the 24-team tournament. They bolstered their case with a 46-point reversal of last year’s result against Springfield.

“It’s definitely motivation to see the score and the next year, you remember what they beat you by the year before,” said senior point guard Dan Roe, one of those six stalwarts. “And it’s being hungry, wanting to win, to be here and in playoff position where we are today.”

The growing pains forge talents like the Fords’ duo of Roe and John Seidman. The latter connected on eight of 10 attempts from the field, including 3-for-3 from 3-point range, for a game-high 21 points and 10 rebounds.

Seidman has added considerably to his game as a junior. Last season, nearly half of his field goals (19 of 40) came from beyond the arc in averaging 5.6 points per game. This season, that ratio has fallen (18 of 63), and the diversified skillset has upped his scoring average to 13.5.

“Just working hard in the offseason and playing hard all the time,” Seidman said. “It helps get me better and for me to advance my game.”

“He’s really bought into wanting to get better, wanting to be a playoff team,” Roe said of Seidman. “We worked out a lot in the summer, just me and him. We have goals that we’re trying to meet.”

Springfield (0-15, 0-10) is at a much earlier juncture of that growth trajectory. McCormick knew the talent and experience would dip in these classes, so he was prepared to shift focus from winning games to winning more granular battles.

“I know it’s tough to see, but there is improvement from the beginning of the year,” McCormick said. “We’re trying to measure the improvement, where the mistakes are, how can we minimize them? I give those 17 kids all the respect in the world. They come here every day and work hard. It can’t be easy losing all those games and knowing that they go into every game as an underdog. But they’re good kids.”

“It’s about getting kids better. That’s what Kevin’s doing, like a good high school coach,” Heinerichs said, vouching that Saturday’s side was improved from what he scouted three weeks ago. “That’s what they do. They take the hand they’re dealt and they make the kids better. Our teams are our teams. We can’t go out and recruit kids.”

The first-quarter blanking takes its place among the Cougars’ rough patches. It took 11:09 for them to hit a field goal, and though the Cougars won the second quarter, they trailed 32-13 at half.

McCormick highlighted positives — Cole Rhodes hit three 3-pointers for 10 points, Devin Allen dropped a couple of sweet dimes to M’khai Terry, who scored 10 points. McCormick is trying to instill the basics, particularly the ability to make decisions at varsity speed, on both ends of the court. And a 30-12 disadvantage on the glass and the inability to dull Haverford’s shooting — 27-for-41 (65.8 percent) from the field, and 9-for-14 (64.3) from 3-point land — meant the 0 in the win column persists.

Robby Longo cleans up the mess. Springfield wins the second quarter but still trails Haverford, 32-13 at half pic.twitter.com/AHDtHNLE68

Chester 60, Bishop McDevitt 52 >> Karell Watkins (15 points, 11 rebounds) and Akeem Taylor (15 and 10) posted double-doubles, and Rahmaad DeJarnette (13 and 9) was one board shy as the Clippers prevailed at the inaugural Stand Against Violence Classic hosted by Woodland Hills High School.

Rustin 66, Glen Mills 49 >> Aaron Thompson scored 12 points, and Xavier Askew and DeAndre Wright chipped in 11 apiece, but the Bulls (3-11) couldn’t quite claw back a 12-2 deficit after one quarter.