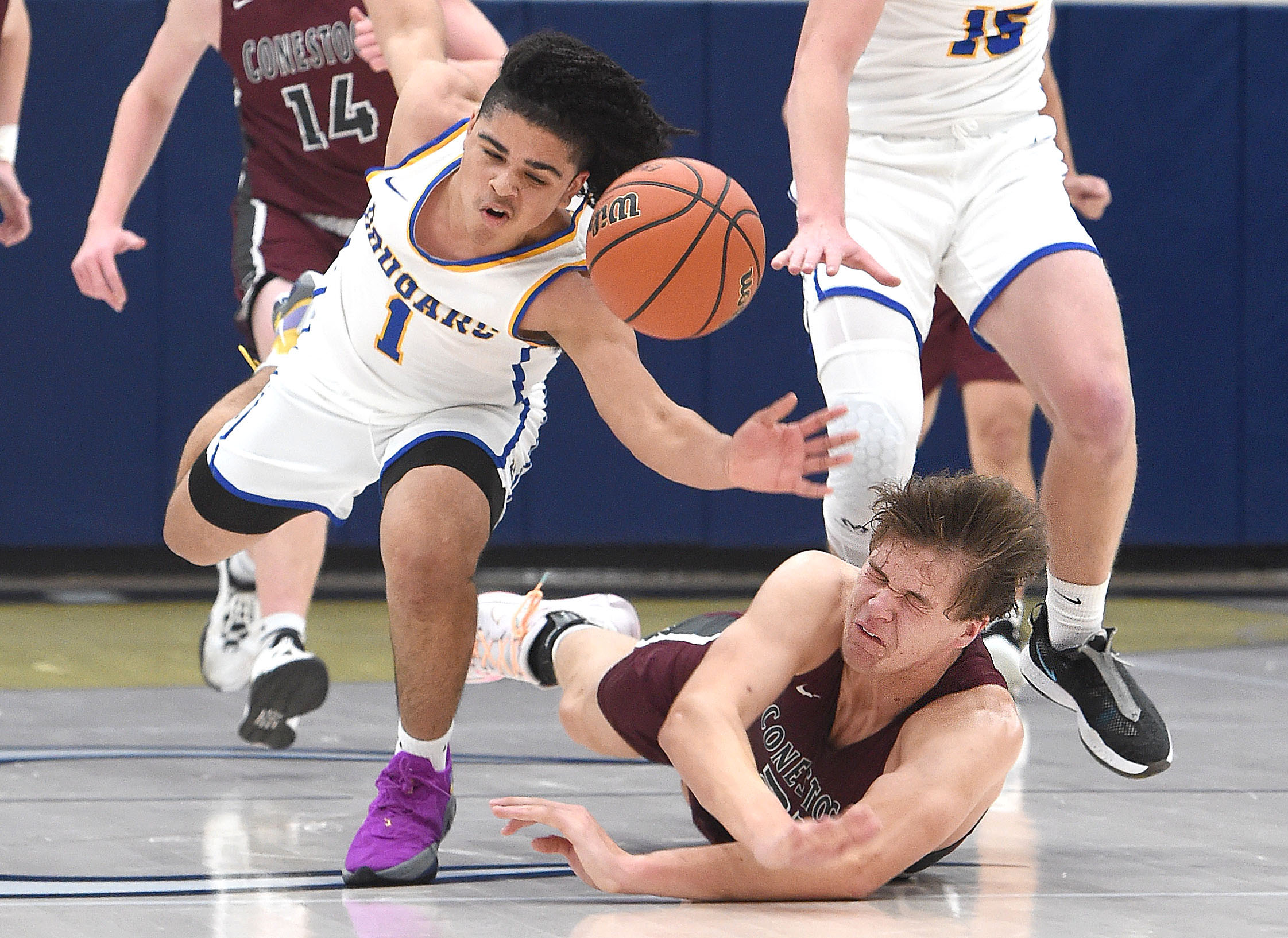 EAST NOTTINGHAM >> It is unfortunate when COVID protocols severely hamper any high school basketball team, but it is, largely, an equal opportunity scourge.

Two weeks earlier, it victimized the Oxford boys. On Monday, it was Downingtown East’s turn, but unlike the Hornets, the visiting Cougars flourished without three of its top six players. And nobody seized the moment like junior guard Connor Shanahan, who poured in a career-high 40 points to power East to an impressive 75-62 victory.

“Our attitude was ‘next man up.’ It’s a cliché, but we really had to do that tonight,” said Cougars’ head coach Brian Grashof.

“Connor Shanahan is one of the best guards in the Ches-Mont and he showed that tonight,” added Oxford head coach Dan Hoff. “He makes plays by getting into the lane to hurt you, or he drops it off to his teammates. I feel like you could put anybody out there with a guy like that.

“We threw some different (defensive) looks at him and he had a game. He put the team on his back.”

Without senior George Bousum, sophomore Micah Hill and junior Ishaan Jha, East needed a big game from Shanahan in the backcourt in addition to an upgrade in production from just about everyone else.

“Those are our three biggest guys – our whole frontcourt,” Grashof pointed out. “For our bench to step up like they did, it was a total team effort. Guys who haven’t played a lot of for us really stepped up and filled those minutes. It was awesome.”

Now 4-9 overall, the Cougars also needed a good start, and Shanahan helped that happen too. He helped put together an early 17-2 run to open an early double-digit lead. And by halftime, Shanahan had 17 points and East was in command 38-26.

“It was big to get everyone’s confidence going, especially the guys that might not necessarily play a lot,” Shanahan explained. “They got their chance today to show what they can do.

“I thought we fought even though we were shorthanded.”

The Hornets (2-12 overall) made a number of second half runs at East, and pulled to within 57-51 with just over five minutes on the clock after Oxford’s Jaden Morales (15 points off the bench) scored on back-to-back possessions. But down the stretch, the Cougars knocked down 7 of 8 from the free throw line to cap a 9-1 run and reestablish a 12-point margin.

“A lot of the guys stepped up. We played well offensively and we got some stops in the fourth quarter that we needed,” Shanahan said.

“To give up that many points to an undermanned team is unacceptable,” Hoff said.

“It’s a credit to the type of coach Brian (Grashof) is. I will go on record and say that I think he is the best coach in the league. There are not too many guys who could be that shorthanded, come on the road in a make-up game and have his guys ready to play.”

Senior forward Carl McClatchy had 11 points and Evan Vendetti-Spahr chipped in 10 points off the bench for East. But Shanahan was the star, with 14 buckets and 10 (of 12) from the line. In the pivotal third, the lefty had all five of the Cougars field goals in the period.

“I just was trying to get everyone involved and do whatever it takes to win,” he said. “But I also wanted to take my shots when they were available.

“I was not expecting 40 points, but it’s exciting. I don’t like settling – I try to get to the rim and let the jumper come when it comes.”

Afterwards, looking at the scorebook, even Grashof was astonished.

“Forty is the most I’ve ever seen in my book,” he acknowledged.

“Shanny is just getting healthy and getting back into the swing of things. He can shoot, he is creative with the ball, and he’s making his free throws – he’s doing a great job. I can’t say enough about the kid.”

Jaden Hager paced Oxford with 19 points and Matt Boyle scored 11 of his 14 in the second half.