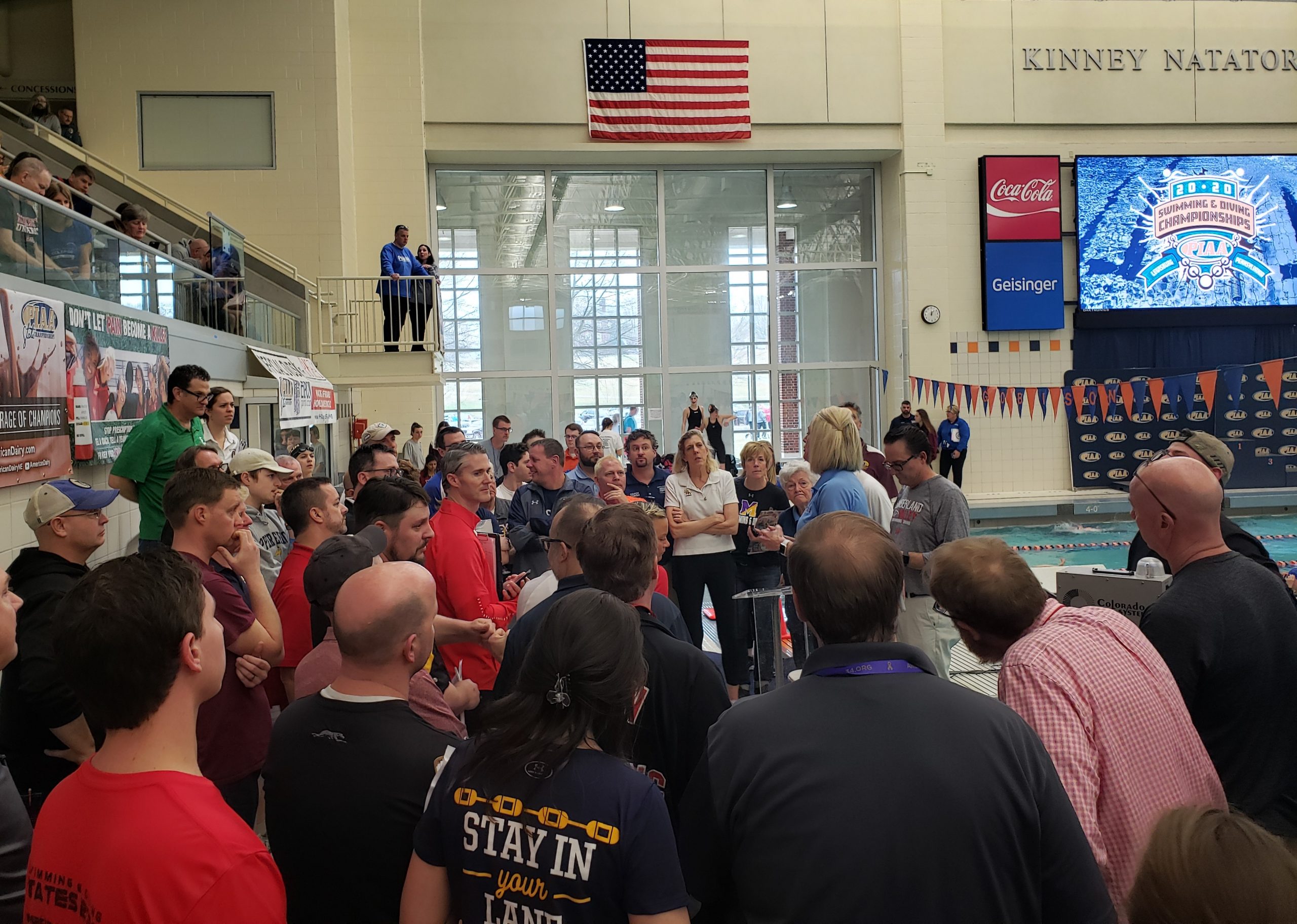 Swim coaches meet with representatives of the PIAA Thursday morning to announce the cancellation of that night's finals at teh PIAA Swimming and Diving Championships at Bucknell University.

LEWISBURG — The rituals were the same, but the context couldn’t have been more different.

Girls lined up to take pictures on the podium at Bucknell University, medals conspicuously absent. Swimmers hugged with tears in their eyes, after a good performance or a bad performance or just a last performance. They clustered in groups, checked their phones, looked to coaches for direction in a maelstrom of bodies.

Those bits of routine sharply contrasted a morning for which there was no script.

The PIAA announced Thursday morning that it would suspend winter championships, due to the global outbreak of COVID-19, for “minimally a two-week period,” while also cancelling the Class 2A Swimming and Diving Championships and truncating the Class 3A meet.

The latter was in progress when the announcement was made.

“We have a really good board and we have a lot of people that have a lot of experience and expertise in education and athletics. That is very, very helpful,” PIAA Executive Director Dr. Robert Lombardi told the Daily Times by phone Thursday. “I don’t believe there’s a playbook for anything like this. I think all of our brother and sister state associations are in similar situations and we have monitored them, and I think many of us are in shutdown mode for a period of time. We’ll see how long that lasts or if it’s a cancellation situation.

“We’re going to take it in a systematic, progressive process so that we’ll look at two weeks, see where we are, see what information we have from the health department, from the government, from our schools, and reassess and go forward.”

The news started to leak out as the fifth and final event of the session, the 400 freestyle relay, was in the water. (The boys had competed in the earlier session.) First came news of the Class 2A postponement, scheduled for Friday and Saturday at Bucknell, which has closed for the spring semester and transitioned to remote classes. That came as 2A divers were on the board for a practice session and as swimmers queued up for registration.

Then came the revelation that Class 3A finals were cancelled, an abrupt ending for high school careers. The preliminaries will be treated as timed finals, with medals awarded according to morning finish.

“It’s sad,” said Conestoga senior Caroline Famous, who was third in the 100 backstroke Thursday. “It’s kind of hard because you’re ready for finals, you’re going to go home, take a nap, get ready, and then you find out it’s over. And it’s my last year and my last race, so I was pretty sad because I wanted to swim one more time.”

Finally, the PIAA announced the postponement of boys and girls basketball via a unanimous board of directors vote. The tournaments were scheduled to enter the quarterfinals Friday and Saturday ahead of three days of finals next week at the Giant Center in Hershey. Any resumption could occur with modifications such as limiting spectators and altered game-day procedures. The PIAA’s Sports Medicine Committee will meet this weekend to discuss further plans.

In a global situation for which the word “surreal” has been strained to within an inch of its life, Thursday presented another instance, the normalcy of a meet proceeding in the background as people checked social media, whispered scuttlebutt and prepared for the latest unprecedented situation.

“This is a unique situation,” Lombardi said. “I’ve never seen anything like it.”

The writing had been on the wall all week as the sports world has incrementally shut down. Three schools declined to host games in the second round of the basketball tournament over coronavirus concerns. Mount Lebanon refused to play Cheltenham in a states game Wednesday due to Montgomery County being the most impacted county in the state. Likewise, Lower Merion’s game against Wilson was postponed, and the Lower Merion School District has announced early closures to prepare for remote learning after the parent of two students was exposed to a person with the virus.

“Those two situations were certainly unique, but we were very sensitive to all four teams that were involved in that,” Lombardi said. “Everyone was trying to do what they felt was in their best interest and making good decisions for their communities. It did present a challenge but I think the good part in all of it was by having frank discussions about people’s understanding and intentions, it helped in trying to solve it.”

Per the Pennsylvania Health Department’s report Thursday afternoon, the commonwealth has two confirmed and 20 presumptive cases of COVID-19 in eight counties, including 13 in Montgomery. There is one case in Delaware County and one in Philadelphia.

The effect on swimmers is unique. Teammates can spend up to 20 hours a week year-round working out together, bonded by the particular connection that is the voluntary suffering of training. The urgency of the PIAA meet ratcheted up in recent days with a rash of cancellations of YMCA and club meets in the state and nationally — USA Swimming announced a 30-day suspension of events Thursday — which would’ve been a chance for swimmers to culminate the season with best times.

Famous was in her fourth states meet, contributing since her freshman year. The University of Southern California signee was trying to soak in her last days of high school swimming, a process that she’s sad to see cut short.

“In my last relay last night, I was so nostalgic and I was just trying to do the best I can,” she said. “And that’s what I was trying to do today.”

One bright side is that the PIAA decree doesn’t pertain to spring sports. While the NCAA has placed broad restrictions on spring sports — and many colleges shifting to online learning for the semester have outright cancelled sporting events — the PIAA left open the possibility that they could continue. March 20 is the first scheduled competition day for sports other than tennis, and Lombardi said the PIAA will leave it to local governance to make the best decisions.