No case of gym intimidation this time for Penncrest’s Norwood 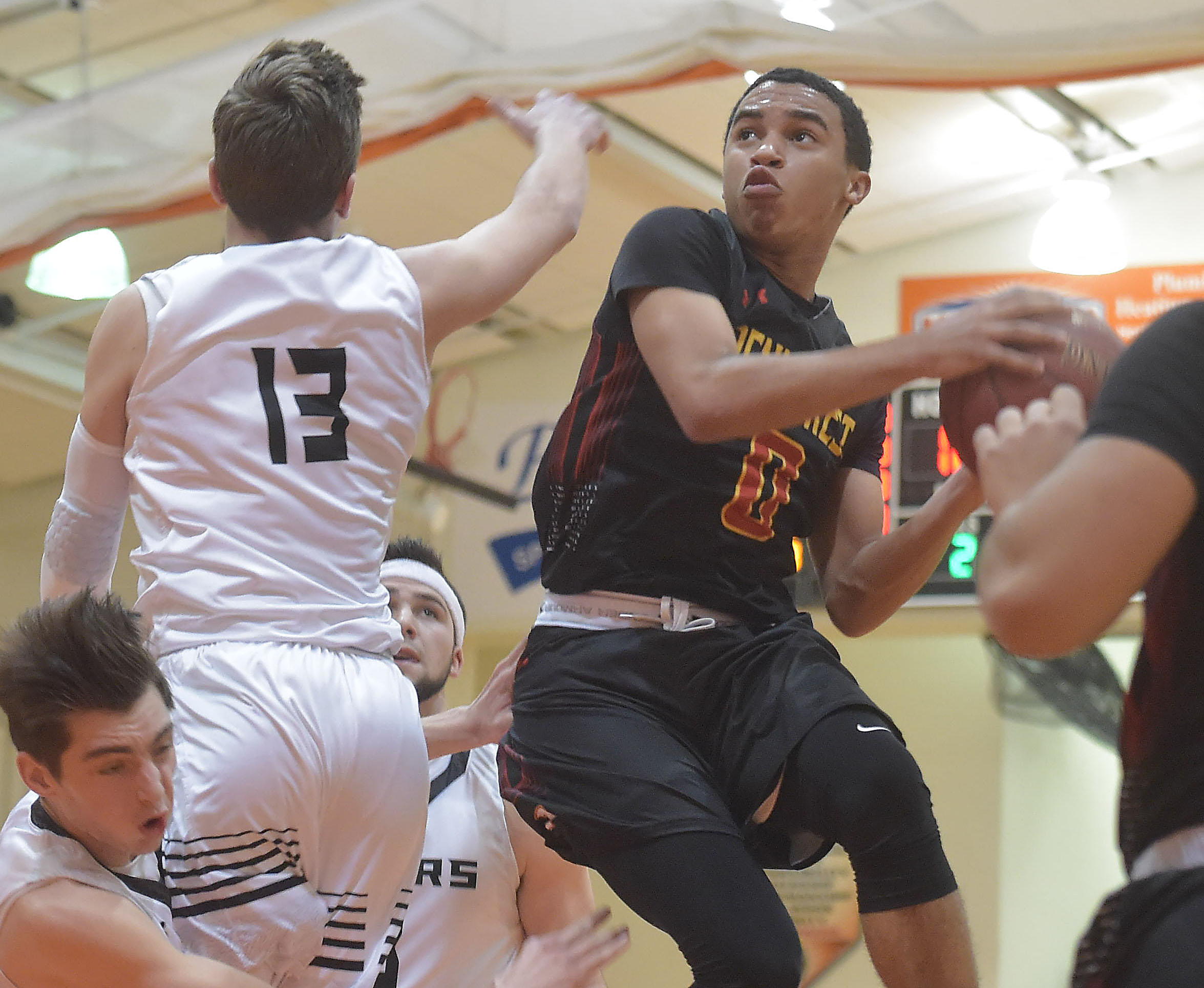 NEWTOWN SQUARE >> Tyler Norwood’s answer to a question he was expecting is succinct.

The last time Norwood stepped foot in the gym at Marple Newtown was the first round of last year’s PIAA Class 5A tournament, a wretched shooting night for the Penncrest guard that provided an anticlimactic ending to a Player of the Year campaign. So did he think about that at all ahead of Wednesday’s return trip?

His latest adventure at Marple Newtown wasn’t so excruciating, at least emotionally.

Norwood scored a game-high 20 points, exiting after three quarters with an ankle injury that permitted only a brief late cameo to stanch a Marple run, as Penncrest sprinted to a 61-41 Central League win.

It was a far cry from last March’s states ouster there at the hands of Hershey, a 51-42 loss after an 8-for-30 shooting letdown by Norwood, who had steered the Lions almost single-handedly to a District 1 title. For whatever reason — on the advanced plane that Norwood and his next-level basketball IQ inhabit — Marple simply isn’t a gym in which he shoots well. Yet he fought through it Wednesday, going 7-for-15 from the field and burying two of six looks from beyond the arc.

“Coming into the game, I definitely took it as motivation,” Norwood said. “Missing 22 shots last time I was here, I let my teammates down. I just wanted to come out tonight, play my hardest and just get the job done.”

The key was staying within himself and being judicious in shot selection. There was the trademark step-back 3-pointer on the second possession of the second quarter, one of four triples by the Lions in the frame. He settled for jump shots early but attacked the glass with gusto later on.

And with Norwood knowing his checkered history at Marple, he found others not as burdened by history, like reserve guard Aidan Carroll.

Carroll, who had just four points in his previous five appearances this season, connected on all three of his shots in the first half, splashing home nine points with his quick release beyond the arc. All three were assisted by Norwood, who dropped five dimes.

Justin Heidig the dime to Malcolm Williams. Penncrest up 22 pic.twitter.com/ZX5YVmeITt

In the third quarter, Malcolm Williams stepped to the fore, scoring six of his eight points and brandishing a novel aggressiveness on the offensive end.

“At halftime, (coach Mike Doyle) kind of got on me for not doing enough,” Williams said. “I wasn’t looking at the basket and trying to score. I was just being passive. And I needed to go (to the basket) for us to win.”

“Marple went box-and-1, and I told him, ‘Malc, you’ve got to score. It’s your time to score,’” Norwood said. “I think he took that with him and came out in the second half and played phenomenal.”

Penncrest’s Matt Arbogast, left, blocks a shot by Marple Newtown’s Anthony Paoletti in the first quarter Wednesday evening. Paoletti had 15 points in the game however Penncrest went on to a 61-41 victory. (Digital First Media/Pete Bannan)

The Lions led by 25 points early in the fourth, hoping not to need Norwood again after he came up lame, twisting his ankle on a jump stop. But Marple (5-4, 2-3) got to within 16 points, thanks to Anthony Paoletti and Mike May.
Paoletti scored eight points in the fourth, finishing with 15. May hit three fourth-quarter 3-pointers, tallying 13 points on a day where only four Tigers hit the score sheet.

The surge proved too little, too late.

“We just weren’t in our game in the beginning of the game,” May said. “They took us out of it pretty quick. We couldn’t find our groove that we usually have with Tommy (Gardler) on the wing and Ant in the middle. We just couldn’t knock shots down to keep in it.”

Norwood rose from the bench at the 3:45 mark. After a minute and 14 seconds on the court and a 5-0 Penncrest run that restored the margin to 21, he trotted back to a seat.

“Knowing we’re up the amount we’re up, it’s really just to calm down,” Norwood said. “They’re going to try to run and jump at us. We practice this every day. We have to find the open man, and something will open up eventually.”
It applied in the fourth quarter, and for Norwood that mindset was useful from the very beginning.

Lewis Robinson scored a career-high 21 points for Radnor, which got 11 from Jackson Birtwistle.

Strath Haven 62, Harriton 55 >> Cooper Driscoll scored 19 of his game-high 22 points in the first half to go with nine rebounds, and the guards picked up the slack late. Ryan Morris scored 10 fourth-quarter points to finish with 13, and

Christian Academy 46, Morrisville 39 >> Tehron Phillips returned from a month out of action with 14 points, Brandon Rochester added 12 points and eight rebounds and Grant Sareyka tossed in 10 points for the Crusaders (3-6, 2-3), as a three-game skid is no more.