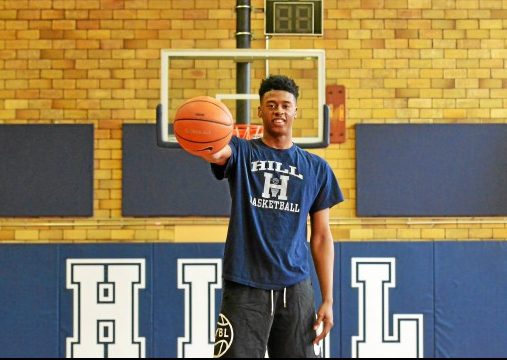 The first time Chase Audige stepped foot on campus at The Hill School, he realized he was a long way away from home.

“I remember thinking to myself, ‘Dang, this place is high class,’” recalled Audige, a native of Queens, New York. “Definitely not what I was used to.”

The hallways, lined with timeless photographs from each sports team through the years. And at the heart of it all, Gillison Court, the storied gymnasium Audige would call home for the next three years.

This past winter, the do-it-all senior’s commitment to himself and his teammates lifted the program to new heights. On the shoulders of Audige, The Hill overcame plenty of adversity on the way to earning the program’s second-ever Pennsylvania Independent Schools Athletic Association (PAISAA) Championship.

For his efforts on the court and the impact he’ll leave behind following his graduation this spring, Audige has been named The Mercury’s 2017-2018 All-Area Boys Basketball Player of the Year. It’s a recognition that he admits, he hardly would have imagined receiving three years ago.

“It means a lot to me, because I’m not from this area,” said Audige. “But to be recognized as the player of the year is something special. It feels like I’m leaving something behind in this area, not just at Hill.”

He is The Hill School’s first athlete selected as Player of the Year since Toni Adewole in boys soccer in 2016. Audige follows in the footsteps of 2016-17 selection Justin Jaworski (Lafayette College) of Perkiomen Valley and two-time selection Christian Kelly (Kutztown University) of Phoenixville.

A developing 3-point shooter with scoring ability all over the court and ferocious defensive ability, Audige’s strongest attribute may be between his ears.

The talented senior wing, who many opposing coaches deemed a ‘New York Baller’ throughout the season, carried with him an edge on the court that brought out the best in his teammates.

“I’m intense when I’m out there on the court,” he said. “Off the court, I’m a completely different person than I am on the court.

“I guess I rep where I’m from with my game,” he added. “To me, when people describe me that way, it just means grit — doing whatever it takes to win.”

He’d need all of that grit this season as he was forced to step in and take over as the team’s primary ball-handler following the graduation of Ethan Norton.

The Hill School’s Chase Audige (15) rises up for a dunk over Kiski School’s Jaka Pandza (10) during the first half of a game this winter. (Thomas Nash – Digital First Media)

One of the quickest to point out Audige’s devotion to his teammates has been Phil Canosa, the first-year head coach who stepped in while longtime head coach Seth Eilberg stepped away on sabbatical.

“Chase was a leader on and off the court for us. Off the court, he is extremely dedicated to the classroom, earning a cumulative 3.6 GPA over his time here at Hill,” said Canosa, who had been a longtime assistant at Hill prior to this season. “On the court, he earned the respect of the team with his tireless work ethic and positive approach on a daily basis.  He is a guy who ‘gives energy’ — always picking up his teammates and getting the best out of them.”

That energy would go a long way, especially during the final stages of the season. Hill School’s Chase Audige (12) throws down a dunk during the second half of a game this past season. (Thomas Nash – Digital First Media)

After a draining 68-66 loss against Blair Academy in the Mid-Atlantic Prep League Championship, the Blues immediately shifted focus to the PAISAA playoffs.

Although that loss hurt, and admittedly still stings, Audige admits that it was the motivation that he and his teammates were searching for.

“We needed that loss,” he said. “We played so hard in that game and still lost. I remember afterward, we said, ‘If we play at the level we just played in every game for the rest of the year, we’re gonna win the ‘Chip for sure.’ There weren’t many teams that could beat us if we played at that level.”

The Blues opened up the PAISAA playoffs less than a week later with consecutive routs against Germantown Academy and Malvern Prep in the first two rounds.

The Hill School’s Chase Audige (15) rises up for a jump shot during the first half of a game against Kiski School. (Thomas Nash – Digital First Media)

Evidently, Audige and the Blues saved all the drama for the semifinal round, a matchup against nationally-ranked Westtown School at Neumann University.

Audige brought the fire from the jump, playing with an intensity that led the Blues and let Westtown, which was without Duke recruit Cam Reddish due to illness but has become an emerging factory of blue-chip talent, know Hill wasn’t intimidated by the highly-regarded and reigning PAISAA champion Moose.

Hill used some late-game heroics from its frontcourt to claim and seal the win. Trailing by two points with less than a minute to go, Audige took a pass at midcourt and found a streaking DaQuan Morris in the lane to tie it up at 47-47. On the ensuing Westtown possession, Morris then pick-pocketed the ball-handler and took it the length of the court to give The Hill a lead it would never again relinquish on the way to the 51-47 win.

“I still don’t know where DaQuan got the energy in that final minute,” said Audige. “I was drained, I know we were all just about out of energy by that point.”

The Blues then followed up that win with an anticlimactic – given the weight of the semifinal win – 68-50 rout of Haverford School in the championship game the next night.

“We were saying that if the games were switched — if we played Haverford first then Westtown — that would have been a much better way to end it,” said Audige. “But a ‘W’ is a ‘W’. That Westtown game was probably the most intense game we had all season. I think we were still hype the next night.” Now as he prepares for his collegiate career at Division I William & Mary College, Audige will always be thankful for the time he spent at The Hill, his second home.

“Before I got here, I wasn’t even thinking about college,” he said. “Before coming to Hill, I didn’t realize how good I could be as a player.

“But I knew being here would be a good opportunity for me to better myself.”

And in the process, he made sure to better those around him.