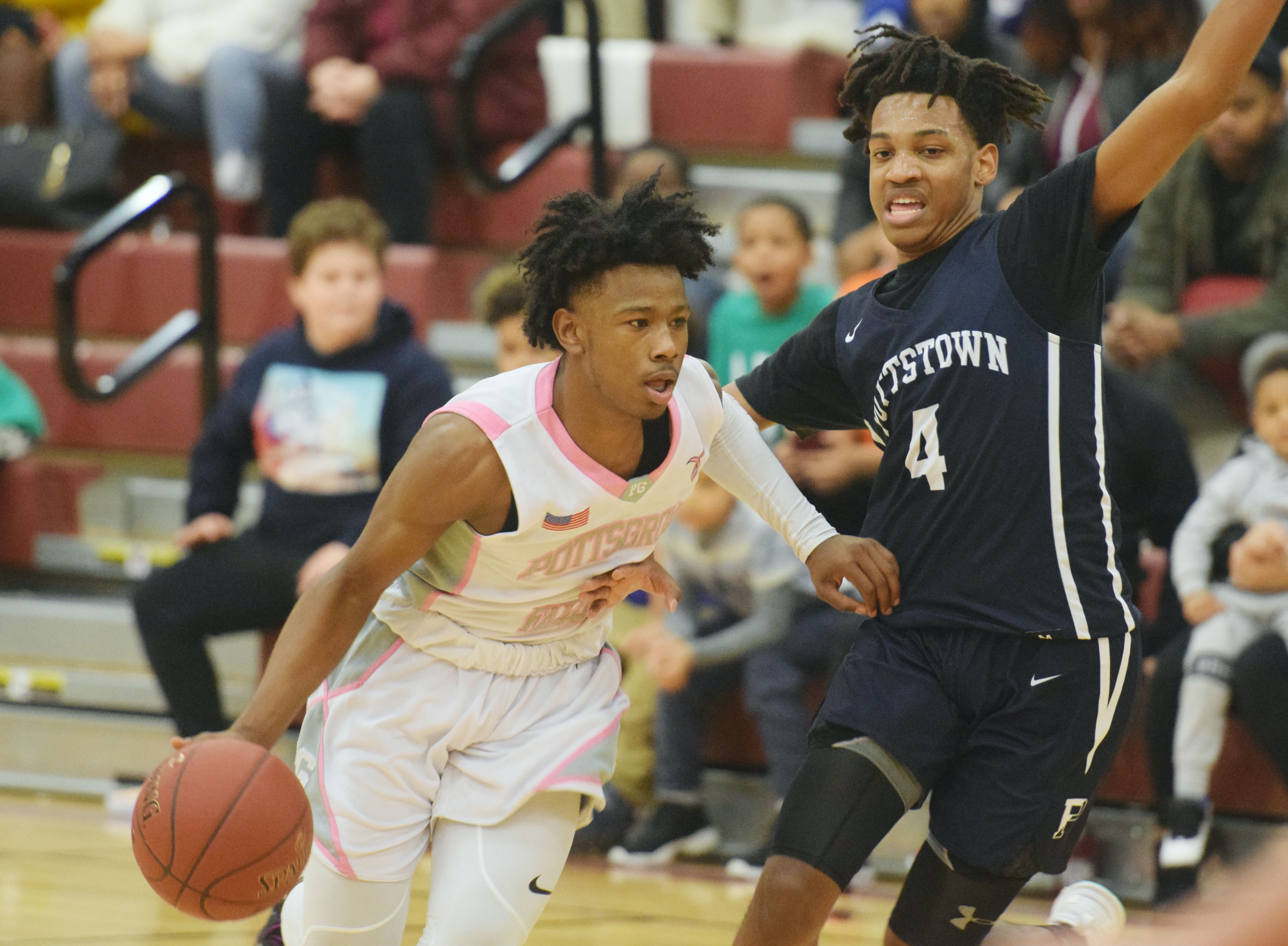 The performance came in a rec league when he was a sophomore. Pottsgrove head coach Jack Flanagan wasn’t having it.

There was no dispute Tuesday night. Clark scored the most points he’s ever scored in a basketball game on Tuesday night when he finished with 43 points in Pottsgrove’s 80-68 home win over Pottstown.

“It was a team effort though,” Clark said. “I couldn’t have done it without my teammates. I feel like we needed this win, we’ve been battling in the conference.”

Pottsgrove’s Manny Clark on his 43 points and the Falcons’ big division win over Pottstown. @PGSDAthletics pic.twitter.com/aeP09FJ655

Along with being a rivalry game, Tuesday’s contest meant a lot for both sides heading in as they began the second half of their division schedules.

Pottstown (3-3 PAC Frontier, 6-6 overall) entered on a two-game win streak after a victory over Pope John Paul II on Thursday and an 85-64 win over Upper Perk on Saturday. A win would help the Trojans keep first place Phoenixville within reach at the top of the Pioneer Athletic Conference Frontier standings. Pottsgrove (3-3 PAC Frontier, 8-5) hadn’t won a PAC game since a 76-69 win against Upper Perkiomen on Dec. 18. In between, the Falcons lost four league games and two division games, including a 90-81 overtime loss to Phoenixville on Saturday.

“In the way that this league is, the division is tantamount to the success that you’re going to have or the chances you’re going to have to make the playoffs,” Flanagan said. “Don’t get me wrong, we play Methacton on Friday night and that is a huge mountain we have to climb like tonight was … but this was a division game that we had to have. It’s Pottstown-Pottsgrove, so you had all that, but really tonight it was a chance to get a division win.”

After sitting the second half of Saturday’s loss to Phoenixville, Clark wasted no time getting going on Tuesday night.

Manny Clark closing in on 40 points on the night. One of the best individual outings I’ve seen. pic.twitter.com/qZXzPIU0aW

The senior guard dazzled with dribble moves, floaters and finishes in the paint on his way to 15 first-quarter points as the Falcons held a 19-13 advantage after eight minutes.

“Our last game I didn’t get to play a whole lot, and that was my grandfather’s anniversary, he died six years ago,” Clark said. “This was like the make up for that game … I was just playing my game. I was hot and let the game come to me instead of rushing it.” Pottstown responded with a 19-6 run of its own to end the first half trailing, 35-32. Junior Tre Bass, who led the Trojans with 21 points, and sophomore Darrius Smallwood combined for 12 points in the quarter.

After finishing with 21 points at halftime, Clark heated up again in the third quarter, scoring 15 points. The Falcons built their lead to as many as eight points in third, but Pottstown led by senior guard Floyd Dashiell, who finished with eight points in the quarter and 16 points overall, helped close the gap, as Pottsgrove led 56-54 entering the fourth.

Pottsgrove senior wing Jimai Springfield helped Pottsgrove pull away, scoring all six of his points in the final period. Smith and Clark combined for 15 points in the fourth, sophomore Luke Kaiser knocked down three free throws and the Falcons got enough stops on the other end to close out the win.

wn“We lost to Phoenixville and we lost to Upper Merion, two teams we should have beat,” Clark said. “If we play as a team, if we play like we did tonight, we can beat any team. I don’t feel like any team can really stop us when we play together. Us playing together, us getting hyped together, if we all match with that same energy, we can take anyone.”