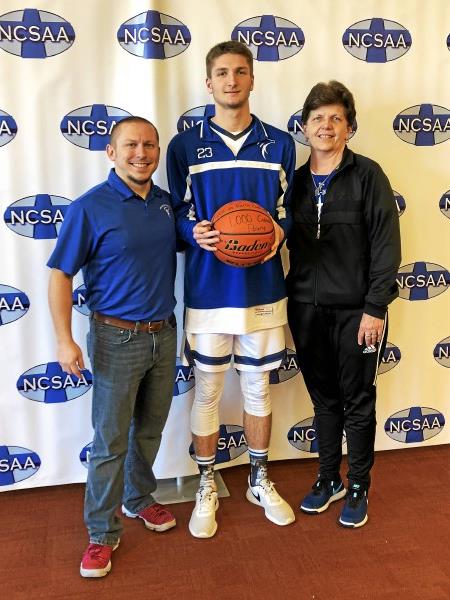 Moments before his team took the court before the final game of their season, Coventry Christian School big man Jake Strycharz got a head’s up from his mother and the team’s assistant coach, Becky Strycharz.

He needed 27 points — more than he’d scored in a game all throughout the season.

But in the fourth quarter with less than three minutes to go, the 6-3 center made history.

The junior collected a pass in the post from senior Hysheem Robinson, took a dribble and finished underneath to hit the mark on his final bucket of the season.

“After I scored, a couple of my teammates came up and pushed me. They were all smiling and happy for me,” he said. “It was a great moment for me, my teammates and my coaches.”

Strycharz wound up with 28 points in the game, a 75-67 loss. It was a new season-high in scoring for him and the 10th time he surpassed 20 points in a game on the year.

Although it’s a major accomplishment for any scholastic player, Strycharz admits he is far from satisfied at this point. He’ll head into his senior season next winter with 1,001 career points to his credit and plenty of motivation with him.

“I’m still driven,” he said. “I want to keep working, keep improving. I want to try to be the best I can be.”

This past season, Coventry Christian finished runner-up in the Atlantic Coast Christian Athletic Conference (ACCAC). The Eagles lost to Valley Forge Baptist Academy, 63-48 on February 17 for the conference championship. For the year, they finished 9-4 in the conference and 20-14 overall.