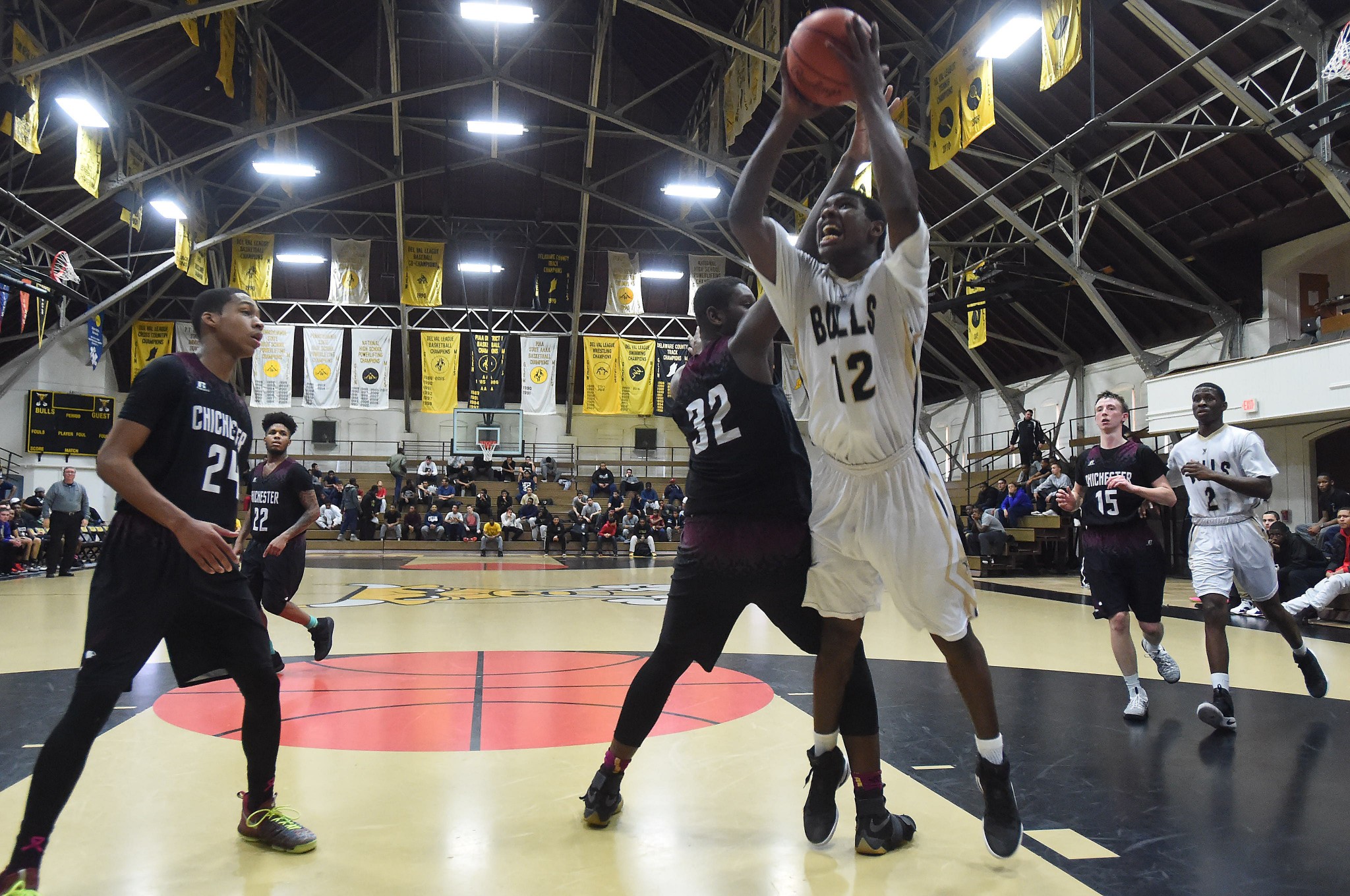 Conveniently, Bacon had five seniors to honor Saturday. Less convenient was that four are forwards, and the quintet excluded both of Glen Mills’ tempo-controlling guards against a backcourt-heavy Upper Darby squad.

So how long was the first shift’s leash in a game of vital importance for the Battling Bulls’ playoff aspirations? Try the whole first quarter, a blitzkrieg that ensured Glen Mills never trailed in a 52-41 nonleague victory.

When a platoon of reserves entered to start the second, the Bulls held a 15-6 advantage. And the tone set early would resonate throughout the game.

“It was fun,” senior forward Myron Sanders said. “We just had fun. We played up and down the court, we outhustled, we all worked hard and we did it.”

Myron Sanders on the glass again. He has 17. Glen Mills up 27-25 pic.twitter.com/TSrudXY6Hk

Sanders’ early intensity stretched the full four quarters. He led all scorers with a season-high 23 points and grabbed six rebounds. Most importantly, though, the low-post grit that Bacon deployed from the opening tip set the stage for a 50-21 domination on the boards that helped Glen Mills (11-8) weather a sub-par shooting day.

Upper Darby (6-13) managed to narrow the deficit to three at halftime and tied the game twice early in the third. But a 10-0 run spanning the third and fourth quarters — punctuated by a Sanders dunk off a feed from Cooper on an and-1 for the first possession of the fourth — torpedoed any comeback hopes.

The inspiration Saturday stemmed from those dogged forwards that controlled the glass start to finish. Wanya Smith, on whom an uncharacteristic starting nod was bestowed, responded with 11 points and 15 rebounds.

Once Cooper and Timmons were reintegrated, they helped perpetuate the momentum in the paint.

“He knows how to get the ball to us,” Sanders said of Cooper. “If we don’t catch it, he’s going to tell us and make sure we catch it next time.”

Cooper attempted just three shots but made his mark with eight rebounds and seven assists. Timmons didn’t score until the fourth quarter but finished with seven, including the team’s only 3-pointer. Cooper and Timmons deposited back-to-back buckets on the decisive run, Timmons’ a triple from the right wing that provided an early dagger.

Combined with Cooper’s steady hand running the point, Upper Darby never got closer than nine points after the sortie that opened the fourth.

Wanya Smith to the hole. Mills up 15-3. Winning the boards battle 15-4 early. pic.twitter.com/OcHSBOXvO0

Long-range shooting was a gift and a curse for Upper Darby. The first quarter featured too many ill-advised shots from distance, though connections by Magd Adelwehab and Anthony Seel accounted for their only points of the frame. (Both finished with eight points.)

It wasn’t until the Royals incorporated the longball smartly into an offense run through big man Bayir Hodges that they started to make progress on the deficit. Fresh off a season-high 16 points in Friday’s loss to Conestoga, Hodges poured in 15 and served as a valuable conduit in the high post.

“Coach (Bob) Miller wanted the guards to try to get the ball inside after a few times that we just came up the court and shot 3s,” Hodges said. “We were a little tired from last night, slowed us down, and we came out a little flat.”

The shooting numbers painted a bleak picture of the convergence of tired legs and poor shot selection: Upper Darby shot 34 percent from the field (17-for-50) and 19.2 percent from 3-point range (5-for-26). The Royals’ primary backcourt scorers, Adelwehab and Noah Walker, shot just 5-for-24 from the field for 14 points.

Adelwehab hit a 3-pointer out of the halftime break to tie the game at 23, then answered a Sanders bucket with a baseline jumper to even the score at 25. But Glen Mills nudged ahead for good in the most apropos manner: Sanders cleaning up a Timmons missed 3 for a lay-in off the glass, sparking a 7-0 spurt.

With a wave of discharges looming from the school, timing that coincidentally falls yearly before the basketball postseason, the Bulls are chasing a spot in the District 1 Class 5A playoffs with a sizeable dose of uncertainty.

But thanks to Sanders and company, Saturday was nothing but celebratory.

Jordan Graves scored 11 of his 14 points in the fourth quarter, and Ryan Morris added 16 for the Panthers.

Chichester 44, Haverford 40 >> DaQuan Granberry scored 22 points as the Eagles (6-14) used much of their 14-pound halftime cushion in withstanding the Fords’ comeback attempt. Granberry hit three of four free throws down the stretch to ice the game.

Peddie School 56, Haverford School 51 >> Jameer Nelson scored 15 points, and Christian Ray and Kharon Randolph added a dozen apiece, but the Fords (17-6) trailed by 21 after three quarters in falling for the fifth time in six outings.