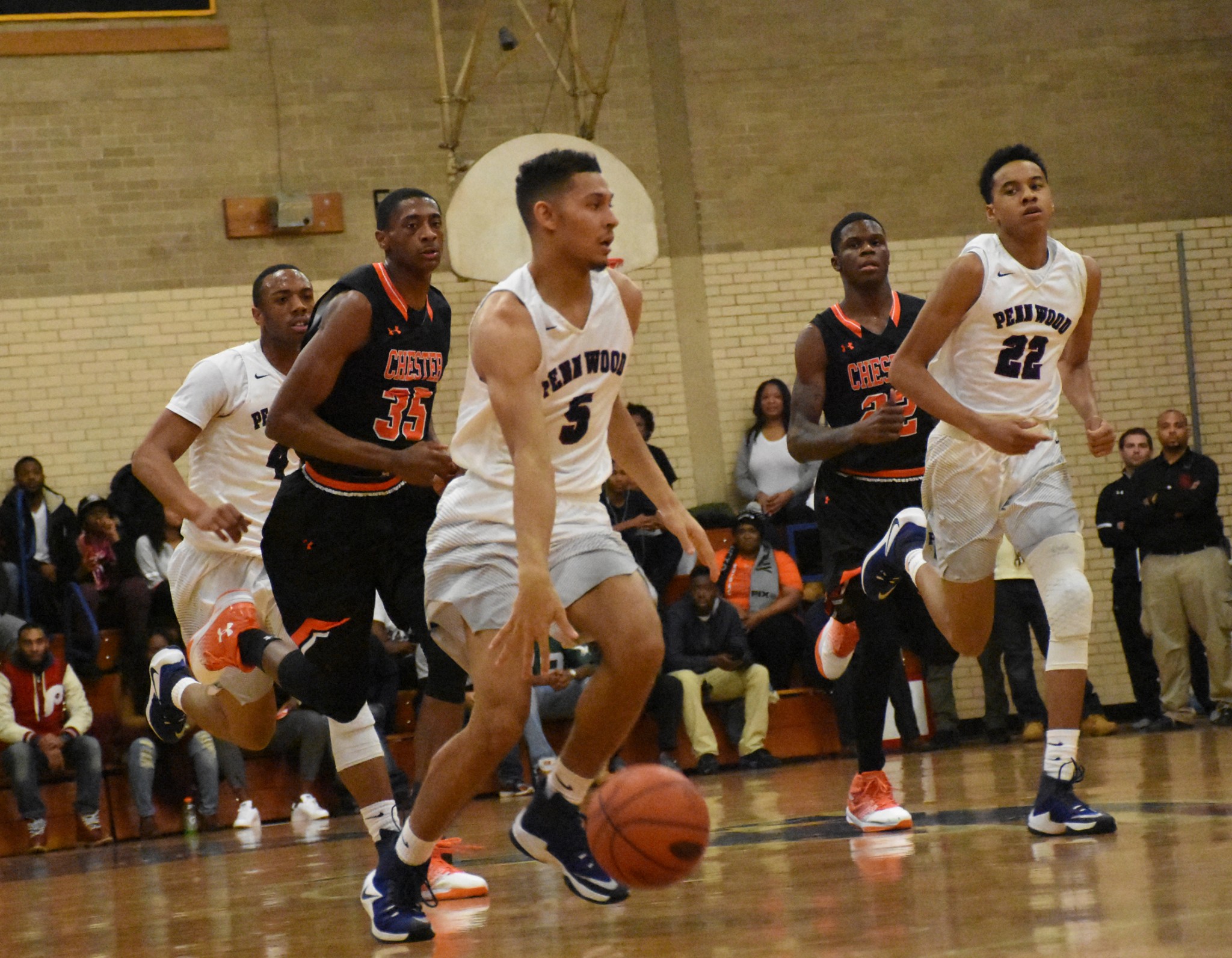 LANSDOWNE >> Pernell Ghee isn’t keen on discussing the past. So for the Penn Wood senior forward’s sake, let’s dispense with it quickly.

Last year, the 22nd-seeded Patriots had No. 11 Lower Merion on the ropes in the first round of the District 1 Class AAAA tournament before Terrell Jones’ banked-in, overtime buzzer-beating 3-pointer. Two seasons ago, as the No. 5 seed and outright Del Val League champs, the Patriots lost on their home court to Penncrest, again in OT.

Both times, Penn Wood’s conqueror went on to the PIAA tournament.

That’s the Patriots’ overarching aspiration this season, and recent form gives every indication they could ascend those heights. But the first step has proven the hardest, and they must exorcise those demons Friday night when No. 22 seed Neshaminy visits in the first round of the Class 6A district tourney.

“This year, we think we’re better,” Ghee said. “We’re on to better things. We don’t want to reflect back on that and get down. We want to be up for this and what’s coming up.”

Members of the team insist that little has changed save for time. Indeed, Penn Wood’s roster is largely intact, though growth is evident in a 15-6 season capped by wins in 12 of the last 13 outings.

Penn Wood collected the Del Val title and reversed seeding from last year, drawing the 11 seed. With 10 of 24 District 1 teams advancing to a ludicrously expanded state tournament, the Patriots stand every mathematical chance of reaching their goals.

“Nothing is really different,” said senior guard Jay Fitzgerald. “We just play hard. Coach always stresses that. I just think every day at practice, we try to go hard, and every game, we just play it like it’s our last.”

The comment seems odd from Fitzgerald, who represents a significant change from last season. As a junior, Fitzgerald averaged 3.8 points per game. This season, he’s third on the team in scoring at 10.0 ppg and leads the squad with 46 3-pointers.

Fitzgerald is a product of remarkable balance that has five Patriots averaging nine or more points per game and seven averaging five or more. Vincent Smalls leads the way at 11.6 points per game, with Ghee at 10.6.

Last year, depth could often be paralyzing — a lot of players waiting to see who of a passel of options would emerge on a given night. This season, they’ve weaponized that balance, with Kairi Jones running the point and Vincent Smalls as the facilitator in the high post that, along with Fitzgerald and Sharif Goff shooting 3-pointers, renders zone defenses ineffective.

With an infusion of fresh ideas from first-year coach Matt Lindeman, Penn Wood is rolling.

“I guess the difference about this group this year is that we know what we want this year,” Ghee said. “We set goals for ourselves this year, and we’re starting out on the right track. First was to win the Del Val, got that done. Now we change our focus to the playoffs, and we hope to go out with a bang.”

Their first-round opponent, Neshaminy is, well, four games under .500 at 9-13, an entrant only by algorithmic consequence of a league full of 6A point bonuses. Sitting at 6-11, Neshaminy rattled off three straight wins to crawl into the picture, though it lost its last two. It has just two wins against 6A playoff teams (Penn Wood has three, despite a 5A-rich league and a nonleague slate of Catholic League and Public League foes). The obvious name for Neshaminy is junior guard, Chris Arcidiacono, younger brother of Villanova legend Ryan.

No. 6 Pennsbury awaits the winner in Tuesday’s second round, a play-in for states. But just as Penn Wood is tuning out the past, the Patriots are also more attuned to their game than their opponent’s.

Also in the Class 6A playoffs:

So the natural progression posited a home game as the next phase, which the 16th-seeded Jags receive Friday against No. 17 Methacton.

“It was definitely one of our goals and it’s a step in the right direction for the program,” Brown said. “Last year, we made the playoffs for the first time since Garnet Valley has been in the Central League and playing with the big boys, so to speak, and this takes it a little further. It’s a great accomplishment for the players to be able to play in front of home fans. It means a lot to the kids.”

The Jags’ last playoff stint was short-lived, overmatched by No. 3 seed Downingtown West. But now Garnet Valley (14-8) faces a tough but winnable game against the Warriors (12-10) with a trip to top-seeded Perkiomen Valley on the line.

Methacton is a quality team, having beaten Perk Valley, 59-42, Feb. 2. It also topped Ridley — which Garnet Valley defeated twice by a total of three points — by 19 in a nonleague contest.

But the Jags are also peaking, a young squad featuring just two seniors. With high-scoring point guard Austin Laughlin (22.4 points per game) and senior Brandon Starr (18.4 ppg) fronting an unsung but talented group that averages nearly seven made 3-pointers per game, the Jaguars are a daunting out.