Foster a steady hand in victory for Ridley 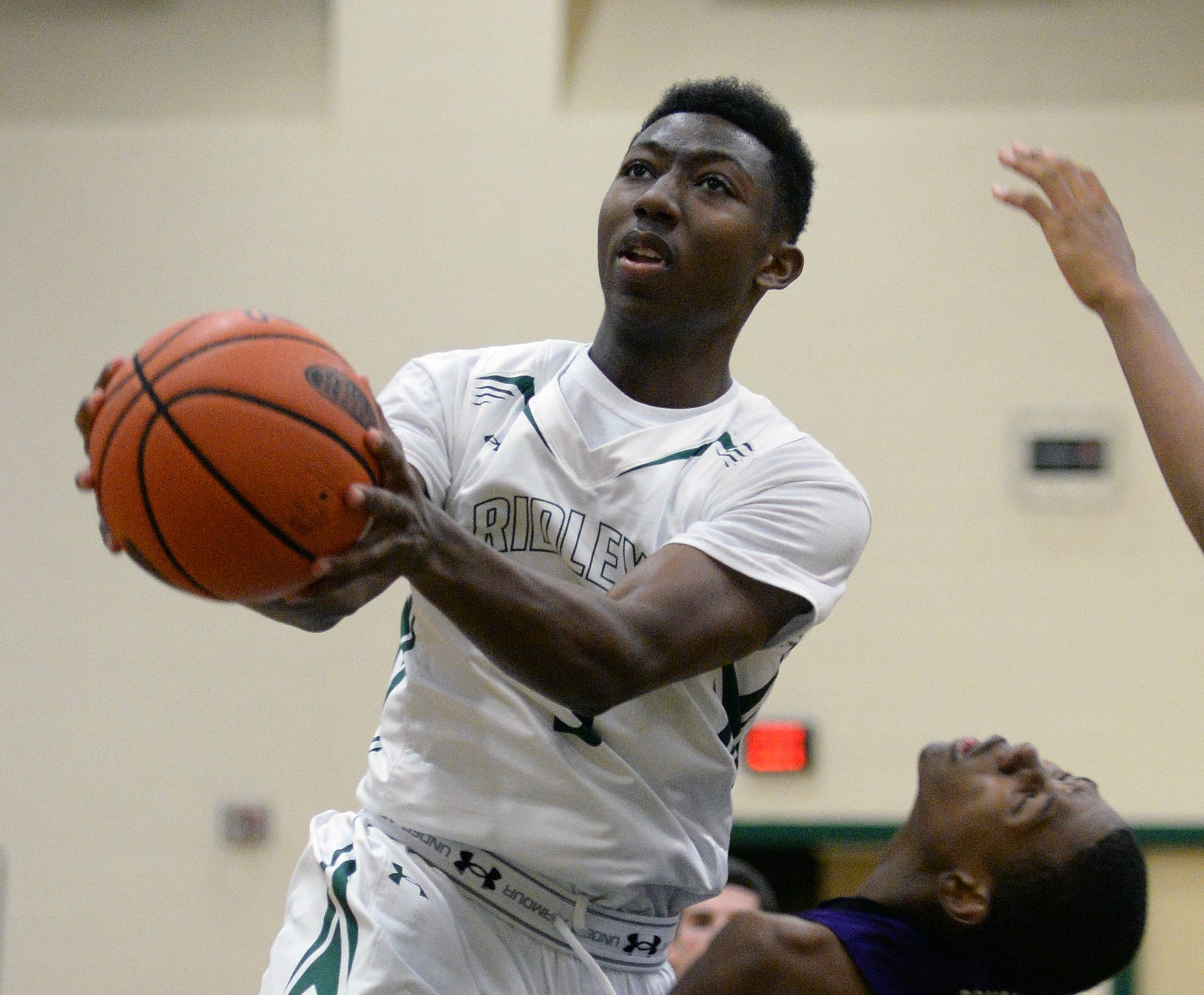 RIDLEY TWP. >> As Julian Wing trudged to the Ridley bench with four fouls, one second short of three minutes into the second half with Upper Darby uncomfortably close, no one needed to tell Brett Foster what came next.

As much as he was sure what his Green Raiders needed without the second scoring threat on the court, the senior point guard Foster also understood what his team didn’t need. And he delivered.

Foster compiled a game-high 26 points and his usual composed play running the point to lead the Green Raiders to a 53-40 Central League win.

In the kind of ragged, physical affair that each Central League seems destined to encounter 10 or 12 times a season, the most glaring difference between the teams was Foster’s deft orchestration.

“It’s picking your spots and making the right team play,” Foster said. “Especially when we have a big lead, we didn’t want to force shots and not make them work on defense the way they were making us work on defense.”

The journey to that big lead wasn’t always smooth sailing for the Green Raiders (3-0, 2-0), who led by just eight points when Wing hit the bench in the fourth. He was saddled with three fouls early in the second quarter, rendering him an offensive non-factor. His only four points came from the free-throw line in the fourth quarter.

Ridley’s other primary avenue of offense, the 3-point bucket, was alarmingly absent, with Ridley shooting just 3-for-19 from deep (including an uncharacteristically frosty 1-for-8 from Foster).

So it fell to Foster to generate offense by other means. He scored 13 points in each half, including 10 in the fourth quarter. He compiled a steady 11-for-13 day at the line. He dished three assists and scooped up four steals. His running bank shot from just inside the lane keyed a 10-2 fourth-quarter run that put the game into double-digits for good.

In a scattershot effort on both sides, Foster’s consistency was a welcomed palate-cleanser for an otherwise hectic game.

Upper Darby showed glimpses of potential spurts, but never sustained the kind of pressure required to get back in the game. Anthony McFall scored 11 points, and Maurice Grier had a big game in the post with 12 points, 12 rebounds and five blocks.

But those positives were tempered by periodic drawbacks. Kahleel Henry was just 2-for-11 from the field and struggled to find shots. The Royals shot 2-for-15 from 3-point range and 8-for-18 from the charity stripe. They had a scant two assists — from McFall and Grier, not any member of the youthful backcourt — against 18 turnovers. Even Grier doesn’t escape unscathed: For all his post dominance, he was whistled for a technical foul for tossing Wing to the floor as the flourish of a loose-ball foul, sending him to the line for four free throws on the game-icing run with 4:37 to play.

Too often, as Upper Darby feels out the growing pains of a backcourt studded with sophomores, the looks that materialized were divorced from the regular flow of the offense.

“It’s definitely a work in progress,” Grier said. “I think we’re getting better, starting to run our stuff more. I say we don’t run plays all the way through all the time, and that’s something that coach tells us all the time, so we’re trying to do that better. When we run the offense for a couple of passes, we get better shots.”

Eventually, Ridley’s veteran savvy won out. Ryan Bollinger hit a pair of 3-pointers in the first half. Kylon Hicks provided quality minutes off the bench despite foul trouble, and Jimmy Bramwell contended with Grier in the paint admirably with nine rebounds.

The deciding factor, as it often seems to be for Ridley, is the simple ability to prevail, to do whatever needs to be done to end up on the right side of the ledger.

“Since there’s three of us (seniors), they want the ball in our hands as much as possible when the game is close because they trust us,” Bollinger said. “Whether we have a shot or not, it’s about making smart plays. It’s about time of possession.”

“We’re an unselfish team. We trust in each other,” Foster said. “My teammates trust me and I trust them.”