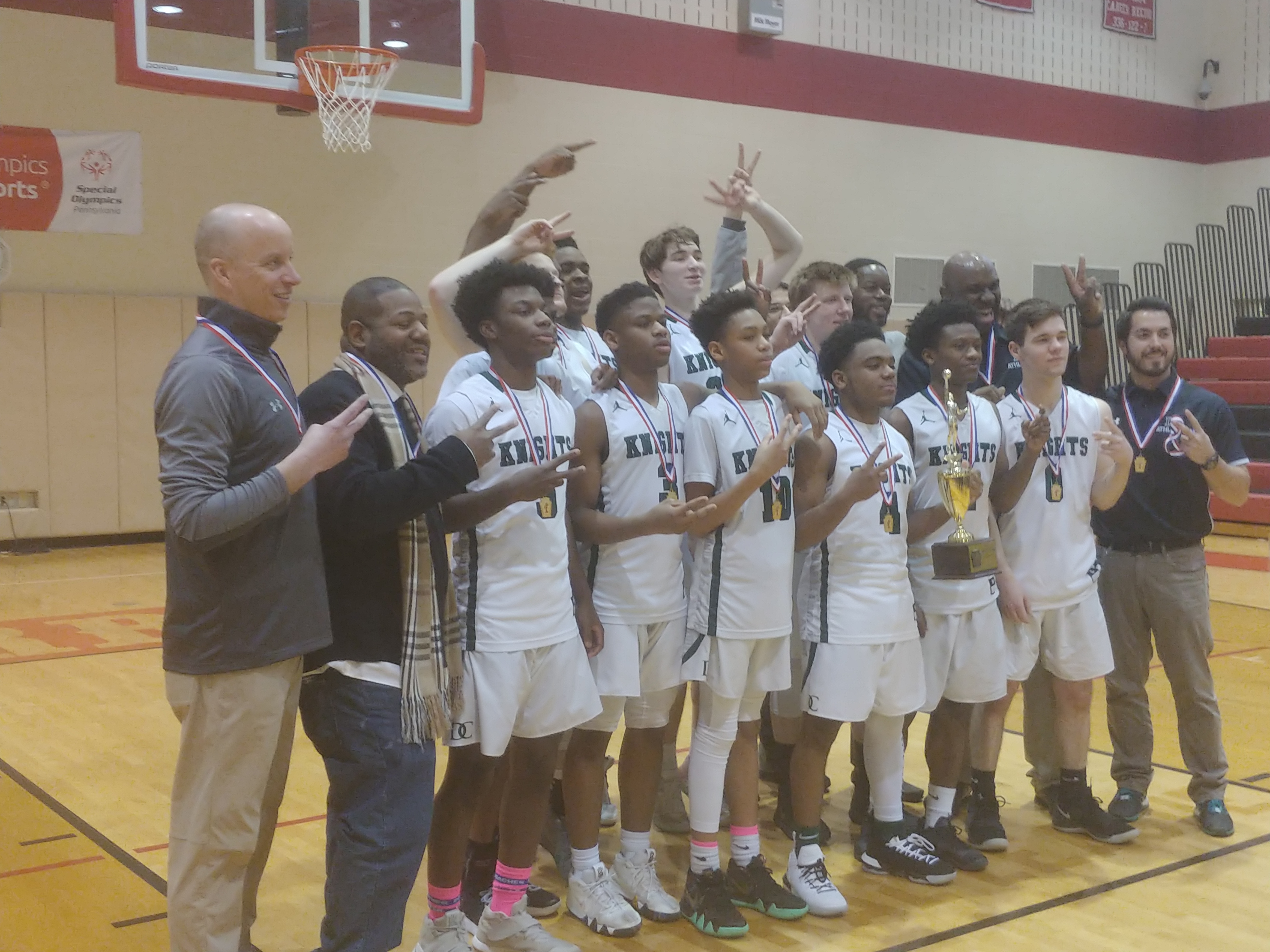 LOWER MERION — There was enough time on the clock for Church Farm to tie or win the game. The 11.5 seconds were not the issue.

But Delco Christian, which prides itself on avoiding foul trouble, had pocketed its fouls for this moment, up by two with the District 1 Class 2A title at stake.

Church Farm inbounded twice. DC halted play at 8.1 and 6.0 seconds. On its next try, Church Farm attempted a shot. It didn’t go far, as freshman Ebuka Nwobodo, younger brother of Knights star junior forward Obinna, got his hand in front of a shot by Max Scott in the corner along the Church Farm bench. Ebuka, with authority, blocked the ball out of play.

Church Farm was left with 3.5 seconds left to try … something. The pass went to center Demetrius Lilley, who rushed an off-balance 3-pointer at the top of the perimeter. It was way off.

Delco Christian, the No. 2 seed, held on to capture its second straight district championship with a 54-52 victory Saturday at Harriton.

After it was over, Ebuka Nwobodo was overcome with emotion. His big brother spoke on his behalf, offering glowing reviews.

“It’s special,” Obinna said. “Just knowing, as a freshman, the moment can get to you and you can do something crazy. So getting that block, that shows me he is a mature player and that he’s only going to get better from here. It was special watching it.”

Here is the blocked shot by Nwobodo. pic.twitter.com/niTt0aMAHn

Obinna and senior forward Jacob Bronkema led the offense for the Knights, who trailed 24-15 after the first quarter. Bronkema couldn’t miss, quite literally, with his baseline jumper. He was a perfect 10-for-10 for a game-high 20 points, while Obinna finished with 15.

They were particularly effective in the third quarter when they combined for all 15 of their team’s points. Bronkema had 14 after halftime, and his deuce with 3:40 left in the fourth gave DC the lead for good.

“It’s something that we’ve done all season and my teammates always find me down there when it’s open,” Bronkema said of his smooth shooting. “It’s what I put most of my work into … and it’s my job to knock that down.”

Obinna Nwobodo became more assertive with his post offense after shooting 1-for-5 in the first quarter. Giving up a few inches to Lilley, Nwobodo had no qualms about taking the big guy one-on-one. In the teams’ regular season meeting, Lilley got the best of Nwobodo with 14 points.

. @thedcknights holds on to win District 1 Class 2A championship. Back to back titles for Delco Christian.

“I try to put our team in the best position in the high post,” he said. “He is a taller, bigger guy. But I knew I had my quickness on him. Credit to my teammates — they gave it to me every time and told me to go. With me at the high post and Bronk at the short corner hitting everything, that’s the reason we won.”

Church Farm (12-10) relied on the 3-ball most of the day, hitting eight treys on 19 attempts. This was a bit surprising to DC. Church Farm hit four triples in the opening stanza and 10 field goals overall. But the Knights adjusted and played stingy defense the rest of the way. The proof is in the numbers: After shooting 10-for-13 in the first period, Church Farm converted only 9 of 29 field goal attempts in the final three quarters.

“We had this saying all year called ‘grinding it out’ and we knew we had to hold the course,” said first-year DC head coach Reggie Parks, who has been involved in the program since 2010. “Basically, I told the guys it’s going to be a tough game and you just have to be mentally tough enough to stick to the plan. In the end, it paid off for us. We worked on nothing but defense the last two weeks.”

Church Farm scored only 10 points in the middle two periods.

Jackson Piotrowski scored six of his 12 points in the fourth and handed out seven assists.

The Knights (16-10) have to wait two weeks for the start of the PIAA Class 2A tournament. But they’ll take this respite with intentions of making a deep run in March.

“No one can take away the bond, the brotherhood that we have, and it’s special going back-to-back in districts,” Bronkema said. “We’ll have a legacy that will live on and that’s something really special. Now we’re looking forward to states.”