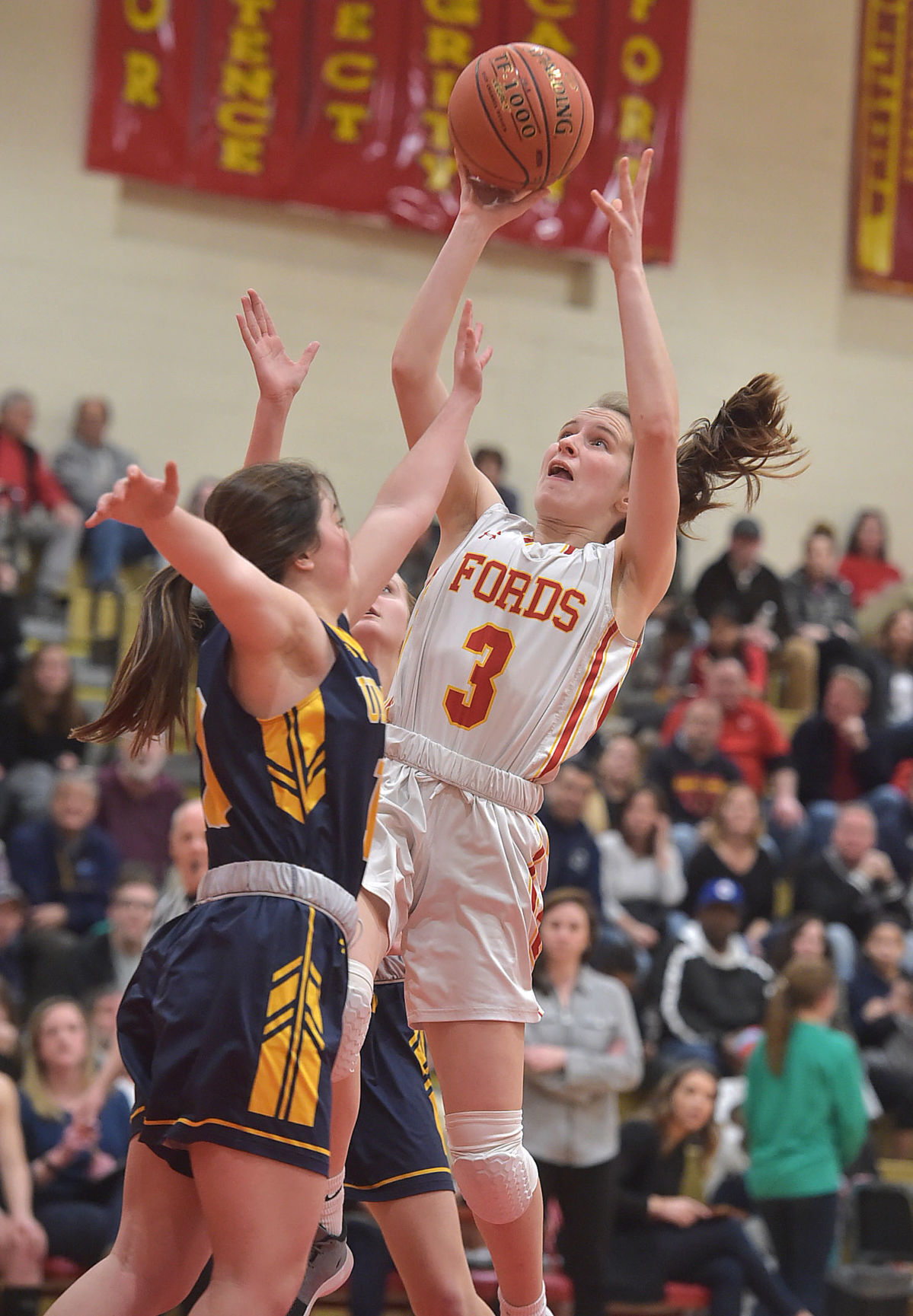 Addison Brodnik, pictured in a game last season, gave Haverford the lead for good in a 36-28 win over Marple Newtown in a Central League tournament quarterfinal round game Sunday. (Pete Bannan/MediaNews Group)

HAVERFORD — Addison Brodnik missed seven of her first eight field goal attempts Sunday. She was having bad luck trying to get anything to fall, but the senior guard wasn’t deterred.

“Hopefully, I’d make those shots at the end and I didn’t want to get too down on myself,” Brodnik said.

All she needed was to hit one shot down the stretch to render her earlier frustrations moot. Easier said than done, but Brodnik had belief she would come through. So, when presented the opportunity to sink the go-ahead 3-pointer with three minutes to play in the fourth quarter Sunday afternoon inside Juenger Gymnasium, Brodnik delivered.

Mollie Carpenter made a risky cross-court pass from the left corner to Brodnik, who knocked down the wide-open trey to put No. 4 Haverford up by three points over fifth-seeded Marple Newtown. Brodnik then hit three foul shots down the stretch to seal the Fords’ 36-28 Central League tournament victory.

Haverford travels to top-seeded Springfield for Tuesday’s semifinal round clash.

Brodnik had a pretty good idea she had connected the moment the ball left her fingertips.

Her trey was a rare sight in the second half. Both teams played excellent defense on the perimeter, which prevented the shooters from getting good looks at the basket. Haverford senior guard Chiara MacGillivray hit two 3-pointers in the first quarter, and Marple Newtown junior guard Nikki Mostardi banked one in the third period, but for the most part the long-range shot was difficult to come by in this game.

The Fords had confidence that one of their shooters would step up when the game was on the line.

“Addison and Chiara are two of our more capable outside shooters and scorers in general,” Haverford coach Lauren Pellicane said. “Addison was at different positions on the floor. We put her out on the wing and, you know, in a close game it’s usually the seniors who really step up and they did that tonight. Both of them played very well for us on the offensive end.”

Sophomore big Caroline Dotsey helped the Fords overcome their outside shooting woes in the second half. Haverford began to take control inside the paint, but it wasn’t easy going against Marple junior forward Haley Levy, who led the Tigers in points (11) and rebounds (five). Dotsey, a 6-1 power forward/center with a soft touch, scored seven of her nine points after halftime and finished with a game-high 11 rebounds and a blocked shot. Carpenter hopped off the bench to grab four offensive rebounds and score a pair of putbacks underneath the basket.

“We kind of lived and died by the 3-point shot in the first half and we talked about it at halftime, that we’re not going to win this game by just taking outside attempts,” Pellicane said. “We rely on our defense to keep us in the game and it did throughout. It was a tight game for about 26 minutes and we were lucky enough to knock down a couple of shots and we were patient on offense and we finally made some foul shots toward the end. That’s how we’re going to win games, playing the right way, protecting the ball and not making too many mistakes.”

Emily Reynolds knocks down a long deuce for @MNgirlsball. Game is tied. pic.twitter.com/9NsO8Ce7Uk

Carpenter had the key assist on Brodnik’s game-winner and added five points and eight rebounds. She teamed with Dotsey to give the Fords a tough low-post combo.

“Mollie’s lost three-and-a-half weeks this year, so she’s starting to get back into preseason form,” Pellicane said. “She played well for us off the bench; Mollie and Caroline both rebounded the ball really well for us.”

MacGillivray led all scorers with 14 points on 5 of 11 shooting. She had eight points in the first period.

The teams were deadlocked after the second and third quarters. Emily Reynolds swished a game-tying basket for the Tigers in the waning seconds of the first half. Dotsey scored from down low to knot things up at 23-all with a minute to play in the third quarter.

Levy and Mostardi paced the Tigers with 11 points apiece.

In other Central League playoff action:

Senior guard Rachel Conran scored eight of her game-high nine points in the opening half. Alexa Abbonizio had seven points and Lexi Aaron added six for the Cougars (15-0), who host No. 4 Haverford in Tuesday’s semifinal round.

The No. 3 Rams defeated the Jaguars in the quarterfinal round of the league tourney for a second straight year. Maretta Smith led the winning effort with 12 points. Lexy Calhoun had 10 and Annie Aspesi finished with nine.

Harriton plays at Ridley in the semifinals.

O’Neill and Karli Dougherty combined for eight steals and eight rebounds, which led to many fast-break points for Carroll.