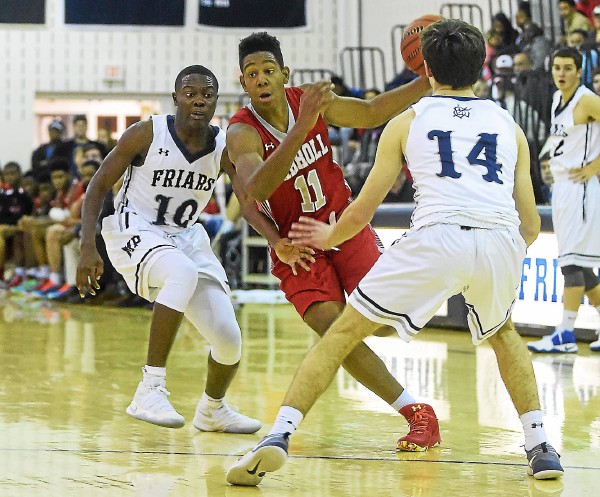 Malvern – Archbishop Carroll, off to a 5-1 start this winter, exploded out of the gates early Friday evening in their 80-66 win against host Malvern Prep.
The Patriots, with talented 6-3 junior guard Justin Anderson and 6-4 senior guard Colin Daly hitting shots from both near and far, jumped out to an 18-3 lead 4 1/2 minutes into the game. Anderson finished with 25 points Friday evening, on the heels of a 28-point performance in the Patriots’ 67-65 win against Penn Wood.
“[Anderson] has a great first step,” said Carroll head coach Paul Romanczuk. “He can score from outside, mid-range, and around the rim.”

To view a photo gallery of the Archbishop Carroll-Malvern Prep game click here
Daly finished the night with 15 points and eight rebounds.
“Colin is playing like a composed veteran,” said Romanczuk. “He knows what has to be done for us in the way of rebounding, and he grabbed a few loose balls tonight and made some big shots.”
Malvern (2-6) battled back after falling behind 18-3 and managed to cut its halftime deficit to 41-30, not an unsurmountable lead considering the fast pace of the game on both sides.
“Malvern kept pressing us the whole time,” said Romanczuk. “It wasn’t easy for us tonight – Malvern’s a difficult team to play, and we took some [overly] quick shots, and made 20 turnovers.”
Just after the halftime break, Carroll went off on a 10-0 run, led by inside scoring bursts from Anderson and 6-6 senior forward Jesse McPherson. The Patriots kept a double-digit lead for the rest of the game.
McPherson and 6-4 senior guard Khari Williams each finished with 11 points to give the well-balanced Patriots four players in double scoring figures.
Malvern Prep was led by 6-0 freshman guard Deuce Turner, who netted 24 points Friday night, including a trio of treys (the Friars nailed 9 three-pointers Friday night). Earlier this season (Dec. 12), Turner scored 38 points in a win against St. Joseph’s Prep. Another bright spot was 5-10 sophomore guard Tygee Leach, who scored 12 points and whose quickness led to several steals.
Malvern head coach John Harmatuk said, “We had some bright spots tonight, things we can build on. Deuce is a good scorer, he can finish with either hand, he’s athletic and tough. Tygee was really active defensively tonight.
“We fought back several times tonight after falling behind [by double digits]. Normally, we have a rotation of 13 players, but tonight we only had nine – two players are out sick, two other are injured. We’re close to finishing our Murderer’s Row [non-league] schedule, and we’re playing to get ready for Jan. 6, when the Inter-Ac season starts.”
The Friars have two more games to go before the Inter-Ac season begins – on Dec. 27 and 28, Malvern will face Souderton and West Chester Rustin, respectively, in the West Chester Rustin Tournament.
Meanwhile, Archbishop Carroll, which defeated Pittsburgh Central Catholic and St. Ignatius (Ohio) in a tournament in Erie Dec. 9-10, will be on the road again after Christmas, playing in a tournament in Richmond, Va. Dec. 26-29.