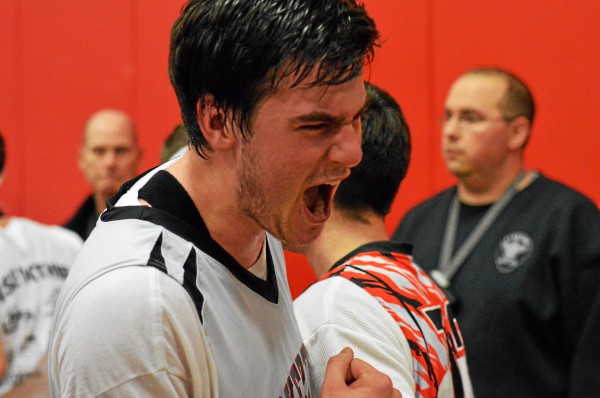 Likewise, that crowd hadn’t witnessed something like them in quite some time.

Freshman Kapp finished with 13 points while Dennin, Rob Merwath and Christian Smith all had a helping hand as Boyertown held off a furious charge from Ryan Corcoran and Spring-Ford en route to a 58-50 victory and its first PAC-10 Final Four berth in five seasons.

“They (Spring-Ford) play hard all the time and it’s great to go out and have a game like that in our gym, with that atmosphere, with that band and with that student section,’ Ludwig said. “Everybody contributed tonight to help us get that win.’

“I haven’t heard this gym this loud in a real long time, as long as I’ve been here,’ Dennin said.

Dennin can add one more item to his list of new experiences as Boyertown (8-5 PAC-10, 13-8) will head to the team’s first PAC-10 Final Four since the 2009-2010 season after it leapfrogged Spring-Ford in the Liberty Division standings with the win Thursday. Boyertown had a 5-5 record in the conference and was 1½ games behind Spring-Ford (7-5, 10-9) before winning contests against Owen J. Roberts and Perkiomen Valley.

No win, however, was bigger than Thursday.

“It felt great only because these guys kept hanging together the whole time,’ Ludwig said. “They never got down, they never gave up, they kept battling, kept fighting. We knew that if we just kept winning ball games that things could happen. They came together in this last month and a half and they’ve really shown some stuff out there, a lot of guts.’

It was the second-straight loss for Spring-Ford, which was playing without Cam Reid (unavailable) and with a limited Matt Gnias, who hurt his ankle in the loss to Methacton Tuesday and was in a walking boot up until the game.

“We lost our composure which was one of the keys to the game,’ Spring-Ford head coach Chris Talley said. “We knew it was going to be an emotional game with everything that was on the line. We lost our composure and gave them the momentum and couldn’t get it back in time to finish it off.’

Kapp continued to show a veteran presence despite his freshman status, coming up huge throughout all four quarters. Meanwhile, Merwath (12 points) made his presence felt in the paint and Smith’s clutch free-throw shooting in the closing minutes helped ice the game after Corcoran and Spring-Ford made the final 4:24 gut-wrenching, nearly pulling off a comeback after trailing as much as 17 to start the frame.

“You knew he wasn’t going to stay quiet for the whole game,’ Talley said. “He certainly made it exciting for everyone down the stretch.’

Corcoran hit for 15 of his team-high 17 points in the final frame as Spring-Ford, utilizing a seldom used combination of Corcoran, Ryan Fitzpatrick, Stone Scarcelle, Nigel Cooke and Charles Drummond, nearly chipped away a 44-27 deficit with under five minutes remaining.

“We needed energy and effort,’ Talley said on his floor change. “We needed to turn the game into an up-tempo pace and they’re young guys but they are athletic and they knew exactly what we needed to do in that game.

“Some of those kids sat the bench all year, they came in and battled and gave us a chance to pull up an upset.’

Corcoran’s four 3-pointers and Cooke’s seven points in the quarter were only outmatched by the clutch free throw shooting of Smith, who thwarted the Rams’ comeback bid in going 7-for-8 from the line. Smith’s free throw percentage became vital as the Rams whittled the deficit to 52-50 before Smith hit two at the line, Kapp had a ball ricocheted his way (set up by a Ben Longacre block) before laying it in and Longacre hit two game-sealing free throws.

Smith finished the game with 10 points.

“It felt great to come up big, Smith said. “I knew that coming in I was feeling confident on my foul shots all game, I was just focused on making them to finish the game out.’

For Kapp, this win came with a helping hand.

“It’s a huge win,’ Kapp said. “The crowd fired us up, we couldn’t even hear coach calling out defenses on the sideline. We just communicated as a team on the court and the shots just fell our way.’

NOTES — Longacre finished with eight points for Boyertown while Dennin added seven. … Cooke finished with 10 points in the loss, a season best. … Jake Freedman also added 10 in the loss, his third-straight double-digit game … This was the first varsity game for Fitzpatrick. … Boyertown’s last playoff appearance came in Ludwig’s first season at the helm.