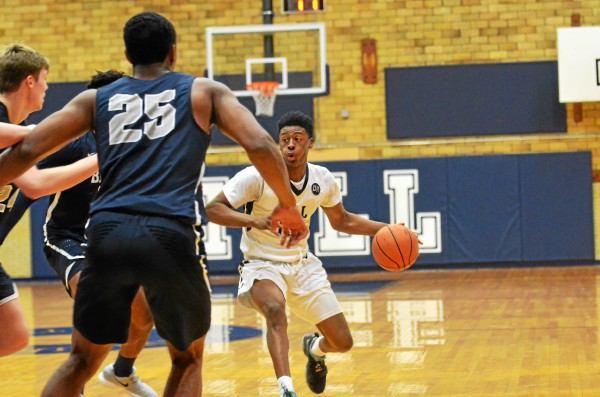 POTTSTOWN >> In a game that featured plenty of talent in the paint, it was the outside shooters who made all the difference on Saturday evening inside The Hill School’s Gillison Court. Hill School’s Caleb Dorsey (23) puts up a 3-pointer during the first half of Saturday’s game against Blair Academy. (Thomas Nash – Digital First Media)

“We played the right way — we defended as a team, we shared the ball and we hit some big shots when we needed them,” said Blair head coach Paul Clavel. “We were trying to put their big guys in ball-screens and pull them away from the basket. Obviously, they have a size advantage. We were just trying to defend and pressure the ball all game.”

Blair improves to 14-2 overall and remains unbeaten in the MAPL at 4-0. Hill School drops to 11-5 overall, suffering its first loss in the MAPL, where they sit 3-1. It’s the first time all season the Blues have lost consecutive games, fresh off last week’s 64-54 loss against Phelps School. The two teams combined for a staggering 49 3-point attempts. Blair shot a solid 9-for-20 from deep — with Dingle and Christopher Lovisolo each connecting three times — while The Hill was just 7-for-29 from beyond the arc.

“We shot the three well early in the game, but not so much in the late stretch of the third quarter and into the fourth,” said Hill School head coach Phil Canosa. “That’s where they (Blair) made their run. When you go down against a team like that, it’s really tough to come back and beat them.” Hill School’s Chase Audige (12) throws down a dunk during the second half of Saturday’s game. (Thomas Nash – Digital First Media)

The Hill held the early advantage through a back-and-forth first quarter and trickled that into the second. Early on in the frame, though, Blair caught fire. The Buccs went on an 11-2 run — sparked by a pair of 3-balls from Dingle — to take a 25-20 lead that they wouldn’t let slip away the rest of the way.

The Blues constantly had pushes and runs of their own, but never enough to mount a substantial comeback. Hill School’s Caleb Dorsey (23) splits a pair of defenders on the way to the basket during Saturday’s game. (Thomas Nash – Digital First Media)

“(Perk) plays a lot like that team,” he said, comparing them to Blair. “They’ve got five guys who can all shoot it and they’re very disciplined. It’s got to start Monday when we get back on the court — we’ll watch a lot of film and learn from what we did wrong.