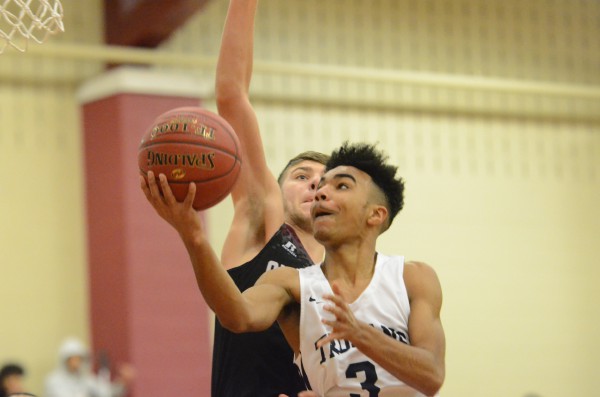 LOWER POTTSGROVE >> Pottsgrove will always be home for Scott Palladino.

So it was only fitting that the first-year Pottstown head coach kicked off the 2018-2019 season back at his old home at the Pottsgrove Tip-Off Tournament on Friday night.

“I love this place. It was real good to be back,” Palladino said with a smile, thinking back to the decade he had spent as head coach of the Falcons up until 2016. “I graduated from here, spent 13 years coaching here. It will always have a special place in my heart.

“That said, it was a little different for me walking in here tonight.”

Fortunately for him, he walked out a winner.

With four players scoring in double figures, Pottstown used a balanced effort to beat Chichester 76-58 during the tournament’s opening game. Senior guard Floyd Dashiell and sophomore forward Robert Burress scored 19 points apiece while junior guard Tre Bass had 16 and junior forward Donovan Towson added 12. And that all was without talented senior guard Anthony Brown, who has been out with strep throat according to Palladino.

“I can’t ask for more than that, said Palladino. “In years past, Pottstown has been dominated by one or two scorers, but we spread it out tonight. Team basketball — that’s what we’ve been preaching since day one. We’re comfortable playing eight, nine guys. We don’t want guys scoring 25, 26 points — we want balanced scoring from everyone.”

Pottstown played above the rim throughout the night, rarely settling for jump shots and instead driving into the paint and finishing tough shots.

The Trojans led 17-16 after the first quarter but used a 10-2 run early on in the second and never looked back from there. Pottstown outscored Chichester 38-27 during the second half where Bass and Dashiell combined for 19 points. “Our defense really picked it up in the second half,” said Dashiell. “We got a lot of steals and transition baskets. That’s really our bread and butter, that’s what we like to do. Try to get up and down and score in transition.”

Utilizing a press defense, the Trojans forced 28 turnovers on the night and rarely let Chichester set up comfortably on the offensive end.

That made for a tough night for the Eagles, though head coach Clyde Jones wasn’t ready to give Pottstown’s defense all the credit. “I believe our decision-making was worse (than the effects of Pottstown’s press),” he said. “If we’re able to be in the right position and execute, we’re not going to be a team that can be pressed. Even with our youth.

Sophomore guard Josh Hankins was a bright spot for Chichester with a game-high 29 points. He finished with four 3-pointers, even with a constant hand on his chest from the first quarter on.

Coming off a solid freshman season, Hankins should be the main focal point for a young Chichester team loaded with underclassmen this season.

“He’s a young kid who works extremely hard,” said Jones. “He believes in his ability and he’ll go out there and play until he passes out. That’s the culture we’re building with how we want to compete. It’s important for him to keep playing that way and for our guys to learn from that. Battling all the way until the end, win or lose.” Pottstown will return to Pottsgrove on Saturday afternoon with a 2:30 p.m. game against Devon Prep. Meanwhile, Chichester will face host Pottsgrove in the tournament’s closing game at 5:30 p.m.

MELTING POTTS >> Although Pottstown won’t meet up with Pottsgrove during this weekend’s Tip-Off Tournament, the two teams will be quite familiar with one another in no time. The Trojans host Pottstown next Tuesday night in both teams’ Pioneer Athletic Conference opener.