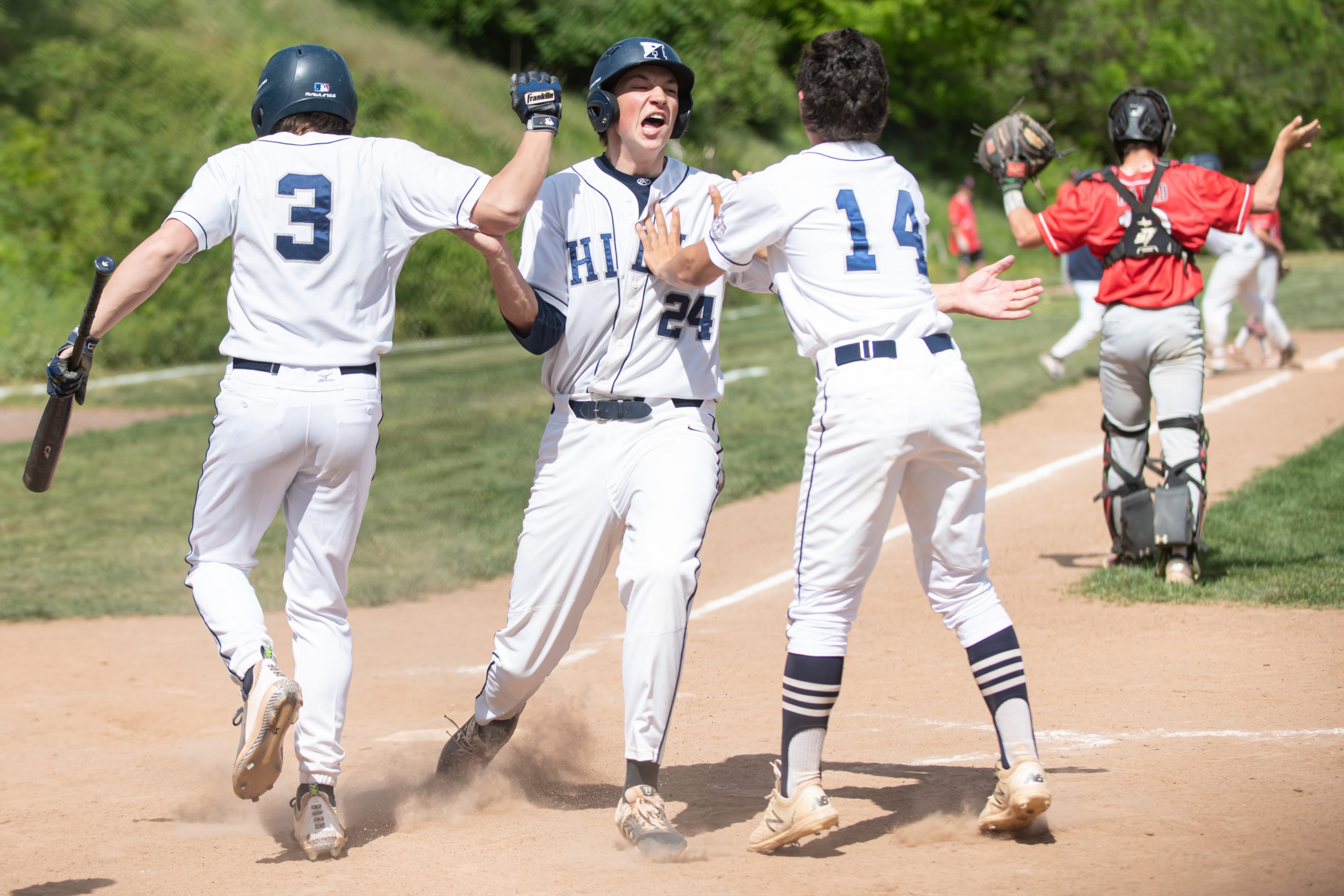 But there was more to Saturday’s game between the schools’ baseball teams. They came into the day tied for second place in the Mid-Atlantic Prep League standings; the Blues also had the added focus of their sixth-formers (seniors) being recognized by the school for their contributions to the program during their time there.

So while the Larries’ 5-4 victory took some luster off the day, it didn’t take away from the overall spirit of the clash between the longtime rivals. If anything, it gives both of them momentum going into their respective post-seasons … no small occurrence, in light of how the COVID-19 pandemic left them without a 2020 season.

“I told the kids win, lose or draw to be grateful for a game like this,” Hill head coach Ed Turner said. “We lost our game last year, so today means a lot. Competitive baseball with fans watching, a battle for second place — we had something to play for.”

No-hit by Lawrenceville through its first four at-bats, the Hill broke up Hugh Devine’s no-hitter and shutout in the fifth. It pulled even with the Larries at 3-3, but the visitors from New Jersey (9-8 overall) recovered a 5-3 lead in the top of the eighth. The Blues (7-5) got one back in their half of the frame, but that score remained intact through a 1-2-3 ninth inning by both squads.

“I told the guys there are certain things you can control,” Turner said, noting the Blues had five players left on base in the first three innings. “We had opportunities, but we didn’t make them count.” Hill School students stand on the hill as they cheer on the Blues baseball team against Lawrenceville Saturday. (Austin Hertzog – MNG)

Pitching was the key for the Larries. They got solid efforts from their starter (Devine) and Shaun McMillan, who came on in relief in the sixth inning and yielded just an eighth-inning run while racking up six strikeouts.

Brandon Bastian, one of the Hill’s four sixth-formers, got the pitching start and worked through two outs in the eighth, by which time he logged 105 pitches. Touched for single run in the second, sixth and eighth and two in the third, he held Lawrenceville to five hits and three walks while striking out five.

“This was one of my biggest ever,” he said. “Seven and two-third innings is the longest I’ve pitched. I wanted to do everything I could.”

Bastian’s RBI single to left-center field plated the first of the Blues’ fifth-inning runs, and he later scored behind Tyler Chenevert off Gilbert Saunders’ booming triple to straightaway center. That came after Brendan Grable broke up Devine’s no-hit bid with a leadoff single.

“I saw the guys, how much heart they have,” Bastian said. “It went down the line, how special this is. It was a big one for all the sixth-formers. Every guy wanted it.”

In the eighth, Jake Voynar led off with a single and went to second off Eli Willman’s fielders-choice hit. He then came around off Casey Gulati’s RBI single up the middle.

The Hill was unable to keep the one-out surge going, though, with the Larries getting a runner at home plate and picking another off third base.

“The guys knew this was a big game, with us tied for second place,” LaRochelle said. “We had been on a four-game skid, so getting back in the win column was big. The guys know they have to execute to win close games.” The Larries now move onto the New Jersey Independent Schools Athletic Association’s Prep A Tournament, where they will take on Blair Academy Monday. They go in as the third seed, with Blair the sixth seed.

The Hill, in turn, sets its sights on the Pennsylvania Independent Schools Athletic Association (PAISAA) tournament, where it will host Germantown Friends Thursday and visit Friends Central Saturday. A non-league game with Perkiomen School is also on the Blues’ schedule.

“This (Lawrenceville) game will give us a boost,” Bastian said. “It shows us what we’re capable of. It will give us life and energy for the games coming up.”

NOTES >> Originally scheduled as a doubleheader of seven-inning games, the plan to change to a single nine-inning game was announced Friday. … The Hill’s other sixth-formers recognized in pre-game ceremonies were Grable, Gulati and Matthew Bienik. … The Blues turned a double play in the sixth, Bastian throwing to Voynar to get Mike Brodey at second and Voynar relaying back to Saunders at first to erase Lucas Simms.