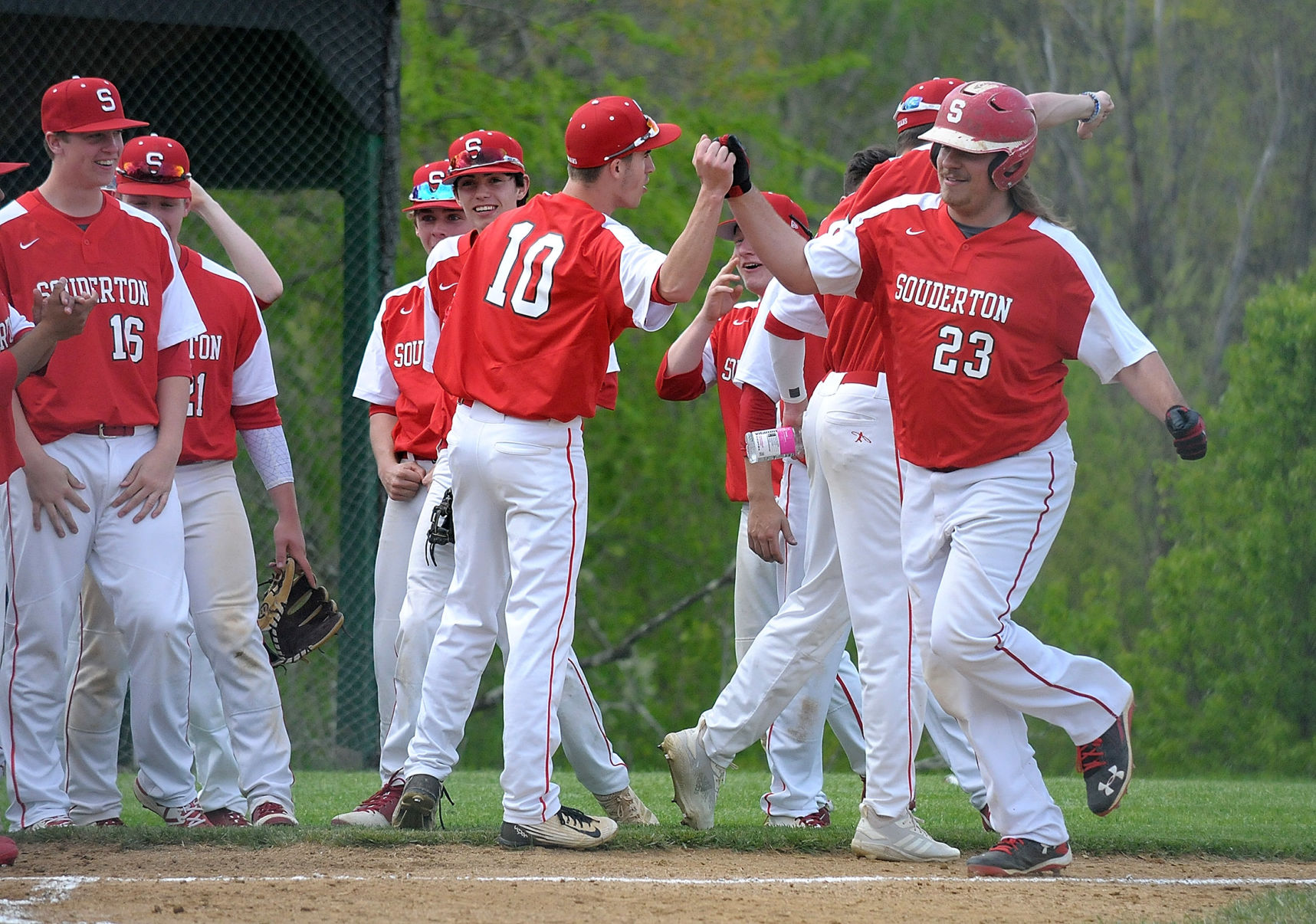 Souderton’s Andrew Curran is greeted on the third-base line after hitting a home run during the Indians' game against Central Bucks South on Tuesday, April 30, 2019. (Gene Walsh/MediaNews Group)

“They’re a good team over there,” Morales said after going the distance against conference rival Central Bucks South. “We just came out swinging from the start and kept our momentum forward. The guys played some good defense behind me. Andrew Curran and Jacob Horton delivered early. Nothing gets better than that.”

Nothing is better than perfection, and after nine games, Big Red is a perfect 9-0 in the Suburban One League Continental Conference, thanks to Tuesday’s 3-0 shutout of the Titans.

“That’s pretty incredible if you ask me,” Morales said. “We still have a lot of work to do but being 9-0 is something pretty special.”

Morales surrendered just five hits while striking out five and walking a pair. Finishing just as strong as he started, the lefty retired the Titans (6-3 conference) in order in the seventh, striking out Carter Hinds to end it.

“At first, my off-speed wasn’t working as well,” Morales said. “(Pitching coach Jay) Price really helped me out with it between innings and told me to get out in front on it. It just started working. It was a pretty effective pitch today.”

With Morales in command, the only offense Souderton needed came in the form of two big thwacks by Curran and Horton.

Horton belted a two-out, solo homer to right center in the first, and Curran followed with a leadoff shot to center to make it 2-0 in the second.

“It’s always nice to start off with two home runs. That starts us off and gets us fired up,” Big Red coach Mike Childs said. “We have new guys coming in, stepping up and doing things. Today, we put (Curran) in the DH spot for the first time all year and he hits a home run.

“We had a couple double plays that were huge. And (in the fourth), they had men on second and third and (Owen Petrich) hits a hard ball back at Jordan and Jordan fields it, gets the last out. Those are the kinds of plays that we’re making.”

Souderton added one more run in the seventh, with Horton sending a deep fly ball to left that allowed Hogain Despain to tag up and score to make it 3-0.

Left-hander Ryan Rieber was solid on the mound for the Titans, going five and a third innings and allowing two runs off of seven hits.