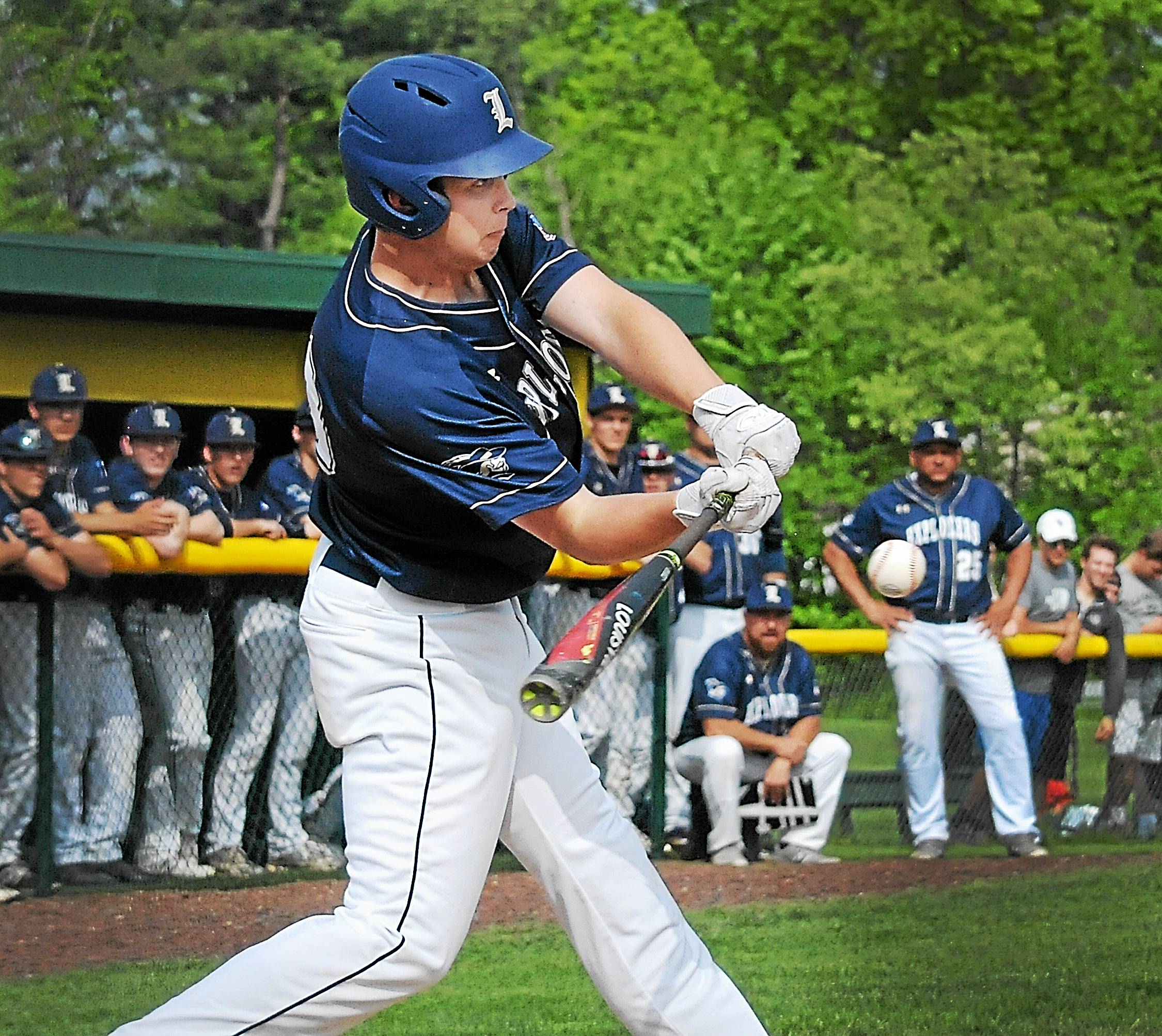 La Salles Owen Lawn at bat during the Explorers' game against Archbishop Wood on Monday, May 14, 2018. (Gene Walsh/Digital First Media)

WARMINSTER >> As his teammates mobbed to meet him, Andrew Cossetti let out a roar of celebration following his two-run home run Monday afternoon.

The La Salle senior catcher had demolished a high fastball over the left field fence, putting an exclamation point on what would turn into a 10-2 Explorers win over host Archbishop Wood. Sure, there were still some memories of Wood knocking La Salle out of the PCL playoffs a year ago, but this was more about the present and the Explorers finishing what they set out to do.

La Salle’s win gave the Explorers the PCL regular season title and the top seed in the playoffs, starting Saturday and it was an emphatic first inning that set the tone.

Andrew Cossetti gets all of one for a two-run homer and 10-0 La Salle lead pic.twitter.com/1bJNsKBoGF

“We thought it was a must-win playoff game, winning meant we locked up the one seed and losing meant we put it in (Archbishop) Carroll’s hands so we came in and felt we had to win,” Cossetti said. “When you have Joe (Miller) coming in with a 4-0 lead, it’s good for him because he knows he can pitch with confidence.”

La Salle plated four runs on just one hit in the first inning off Wood starter Jack Colyar. Colyar battled but couldn’t find the strike zone consistently, walking four batters and burning 40 of his allotted pitches in the frame.

Eric Marasheski set the tone for La Salle, drawing a six-pitch leadoff walk, eventually scoring on Brian Schaub’s mutli-hopper down the first base line, both at-bats Explorers coach Kyle Werman cited as influential. Cossetti had the only hit of that frame, dropping a single in front of a diving outfielder and while La Salle left three men, it had gotten off to a solid start.

Enter Miller, the Explorers’ left-handed ace, who came in firing and struck out the side in order with all three outs coming via called third strikes.

La Salles Joseph Miller on the mound during the Explorers’ game against Archbishop Wood on Monday, May 14, 2018.

“A lot of these kids play with and against each other so there’s always that healthy rivalry and you circle this game on the calendar knowing it’s going to mean something at the end,” Werman said. “Joe has seemed to get stronger, you see a little more life as it’s gotten warmer. There’s some deception, guys have to cheat a little bit to get to the fast ball and what he’s been able to do is mix in two or three pitches that aren’t fast balls for strikes. It creates a little doubt.”

Miller, who touched 91 on a radar gun at the game, yielded just one hit in his four innings of work and struck out eight batters. Cossetti, the Explorers catcher, said everything was working for the southpaw on Monday and once Miller established his fastball on the outside corners and got calls, they rode with it.

La Salle led 5-0 after two runs all with just one hit. If there’s one thing the Explorers have done this year however, it’s hit the ball hard and they felt like it was a matter of time before the hits came. A walk by Owen Lawn and a bunt single by Matt Acker opened the third, flipping the order and setting up Marasheski to crush an RBI double and Cossetti to belt a sac fly to left field.

“Everybody had been getting good at-bats throughout the game and we knew hits would eventually just fall,” Cossetti said. “They did, we put up a 10-spot, came away with the win and now we can look forward to Saturday.”

Wood will be on the road to open the PCL playoffs with either the No. 5 or No. 6 seed, depending on the outcome of Monday night’s game between Neumann-Goretti and Father Judge. The Vikings had some success in the fifth inning, ripping three hits and putting two runs across the plate but found themselves in too big a hole to climb out of.

The Vikings lost their last three PCL games, counting Monday, but coach Jim DiGuiseppe Jr felt his group has the make-up to get things righted once the weekend arrives. Wood started on the road in last year’s PCL playoffs and advanced all the way to the title game with many of this year’s team in the starting lineup, so they have that experience.

“We’re trying to navigate some rough waters and my job is to keep our guys focused and accentuate the positives and build upon them,” DiGuiseppe Jr said. “We came out motivated, sometimes you have to tip you cap to the other team for coming it out and taking advantage.”

La Salle’s bats made most of their noise in the top half of the fifth when Lawn and pinch-hitter Joseph Rossi led off with back-to-back doubles, Rossi driving in a run. Cossetti came up with one out and sent the second pitch of the at-bat on a one-way ticket over left field.

La Salles second baseman Matt Acker tags out Archbishop Wood’s Ryan Di Vergilis going to second base during their game on Monday, May 14, 2018.

As Werman addressed his team post-game, he made sure to note that while they put in a lot of work to finish on top of the PCL, it doesn’t mean anything if they don’t come out and execute in the postseason. With an experienced group that knows well how fast a season can come to an end, Werman felt his guys would be ready for Saturday.

“A lot of these guys, it’s their third year on varsity and they’re hungry,” Werman said. “It’s really tough in the high school environment, it usually comes down to one game and you try to just stay in the moment and not make it bigger than it is. It’s challenging when you know if you’re not great on that day, it could be over but hopefully because they’ve been there, they have the emotional maturity to handle that.”