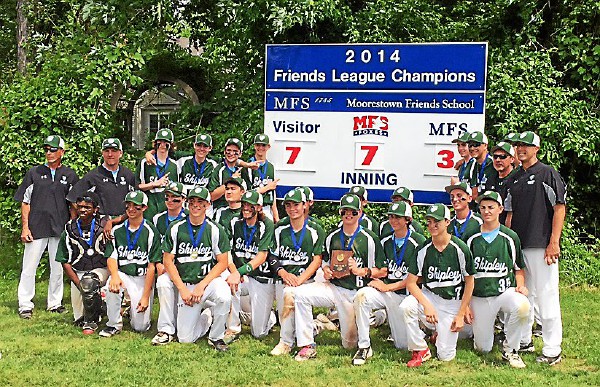 Shipley’s road to the Friends’ Schools League championship was not an easy one. The Gators had to win three games instead of the traditional two because of a three way tie with Westtown and George School during the regular season.

The first playoff game saw the Gators playing in a “play in’ game against George School. Shipley came out on top with a 7-0 victory. History again was almost made as freshman pitcher Gerard Sweeney took a no hitter into the seventh inning. The no hitter was eventually broken up with one out but Sweeney and the Gator defense preserved the shutout. Offensively, junior Pete Sobelman went 2-for-3 with a double and Sweeney helped himself as he drove in Blake Rodack and Darien Pass on a fourth-inning single.

In the semifinal playoff game Shipley beat Germantown Friends 1-0. Sophomore Jack Dougherty took the mound against Germantown Friends in a game that had a MLB playoff atmosphere. Dougherty went 6 2/3 to get the win while freshman Gerard Sweeney earned the save as he was able to get the last out with a tricky pop up to freshman second baseman Blake Rodack while the bases were loaded. The Gators defense came through over and over again as senior right fielder Brendan Marsh threw out two runners at the plate to keep the Tigers scoreless. Offensively, Rodack, Sweeney and Marsh all doubled while Josh Spear drove in the only run on an infield single.

Saturday’s championship game started off with a 45 minute rain delay as the skies opened up in Moorestown, N.J. The delayed start may have had an effect on the first inning as Moorestown Friends jumped out to a 2-0 lead on a home run by Matt Ounijan. However, the Gators had other plans for the home team. Freshman Gerard Sweeney shut down the Moorestown potent offense the rest of the day as he pitched a complete game four hitter while only giving up one earned run and striking out four.

While Sweeney was taking care of business on the mound, the offense came alive and secured the win. Junior Phil Johnson greeted a reliever with line drive base hit that drove in two runs in the 4th inning to tie the game at 2-2. Trailing 3-2 in the sixth inning, the Gators put up two more runs on the board with back to back walks by junior Nick Wojtelwicz Brendan Marsh. Josh Spear then singled to score Wojtelwicz and tie the game at 3-3.

Blake Rodack came up to bat with runners on second and third and drove in the winning run on a ground out to right side to give the Gators the lead for good at 4-3. The Gators came back in the seventh inning with three more runs to go up 7-3. The inning was highlighted with a Brendan Marsh single to center that scored Jack Dougherty and junior Griffin Daly.

Marsh led the offense, going 2-for-3 and two RBI’s and Jack Dougherty was 2-for-3 on the day. Phil Johnson’s single and two RBI’s with two outs sparked the offense. Nick Wojtelwicz scored three runs and was 1-for-2 and Pete Sobelman drove in a run with a sacrifice fly in the seventh inning.