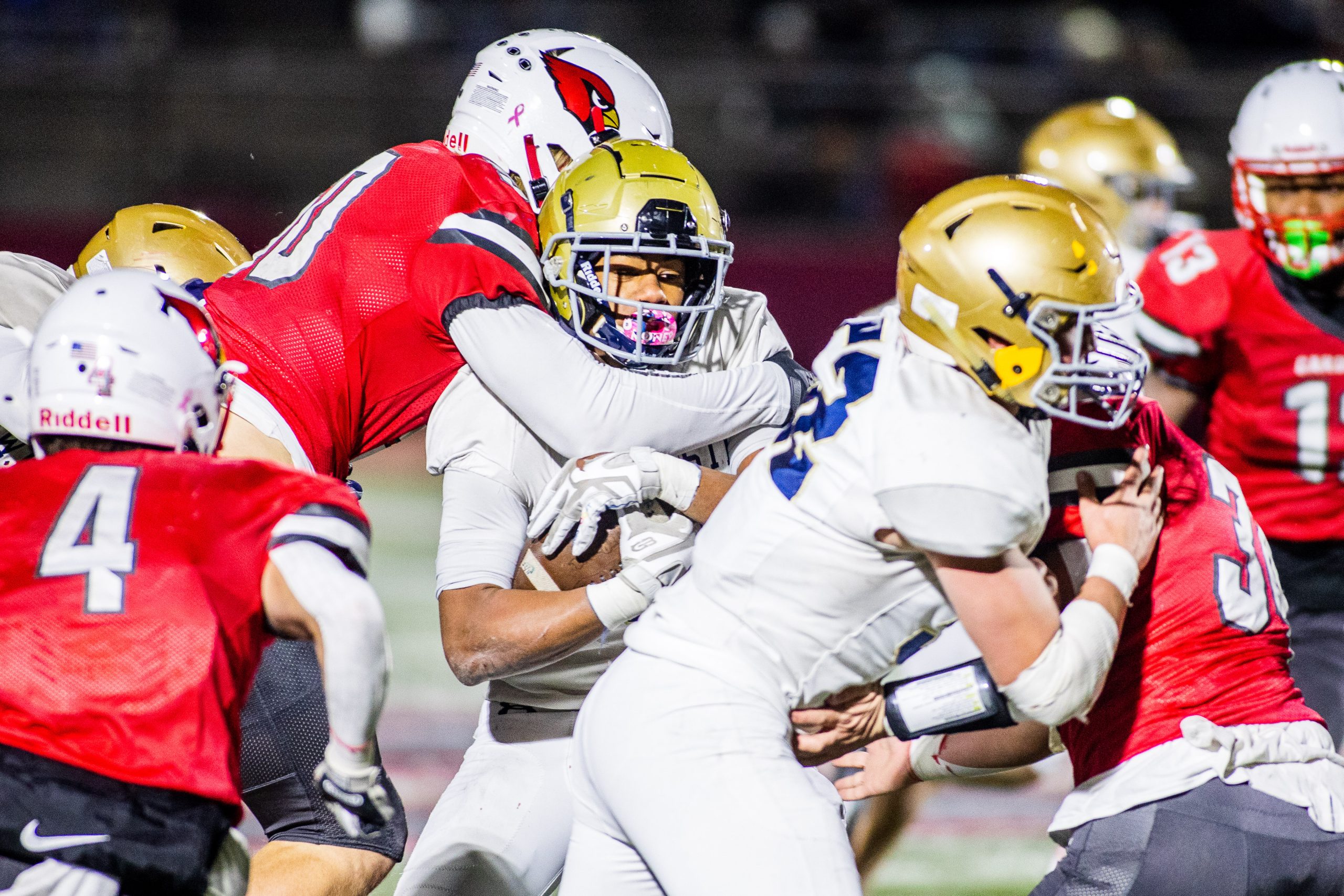 FORT WASHINGTON >> Coming in as an underdog against top-seeded and undefeated Upper Dublin, No. 3 West Chester Rustin was looking for a sign of hope.

But if a false start and a timeout called prior to their first play wasn’t enough of an omen for the Golden Knights, having the lights go out at Cardinal Stadium early in the second quarter probably was.

It was that kind of night for Rustin, who could never find a rhythm on offense, thanks to a multitude of pre-snap penalties and personnel issues, and for the third year in a row, Rustin finished runner-up in the District 1-5A tournament, this time falling to Upper Dublin, 21-7.

“I think we have a couple young guys in there for their first time and I think we had some nerves,” Rustin coach Mike St. Clair said. “We were able to correct it, but it was a little too late.”

The Golden Knights (11-2) had three false starts on their opening drive and finished with 13 penalties for 101 yards.

As disjointed as Rustin’s offense was, the defense was ready for a battle and subdued Upper Dublin’s high-powered offense for much of the game.

Cardinals’ senior, Colin O’Sullivan found Staring Reaves for a 33-yard touchdown late in the first quarter to open the scoring. Upper Dublin drove close to the red zone on its next drive, but Rustin forced a turnover on downs and went to work.

Suddenly, with eight minutes, 44 seconds left in the half, the stadium lights shut off, leaving only the press box, scoreboard, nearby tennis court lights and fans’ cell phones to illuminate the area.

The teams were sent back to the locker rooms and it was about a 25-minute delay before action restarted. Per the theme of the night, Rustin committed a false start penalty its first play back.

“We just made a lot of mistakes and came out slow,” Rustin senior Daimon Jacobs said.

With just over five minutes left in the half, Upper Dublin blocked a Rustin punt and took over at the Knights’ 35. The Cardinals’ first play was initially called a fumble, but a moment later, overturned to an incomplete pass.

Upper Dublin made it count, completing the drive with a four-yard TD plunge by Jacob Cornbluth, and the Cardinals took that 14-0 lead into halftime.

“We shot ourselves in the foot too many times,” St. Clair said. “(Upper Dublin) is a big, fast, athletic team and are well-coached and they do what they do.”

What the Cardinals do this season is play dominant defense and keep winning. On their first drive of the third quarter, Nyfise McIntyre scored from a yard out. Upper Dublin kept Rustin out of the end zone until David McClain used a naked bootleg to score on fourth down with five minutes, 15 seconds remaining in the game.

It was the first time Upper Dublin had been scored on this postseason. The Cardinals won their third district title in five years, all three against Rustin.

“I feel like the Buffalo Bills,” St. Clair said, referring to the Bills teams of the 1990s who lost four straight Super Bowls. “I’m proud of all our guys. Only one team ends the season with a win and tonight was (Upper Dublin’s) night.”

Sophomore Chase Hatton led the Knights with 63 rushing yards in the game, and he is one of many returners for Rustin, next year. With 1,219 career rushing yards, Hatton will also be keeping an eye on Terry Loper’s school record of 4,758 yards, with two more years to play.

“I think we know how to play under pressure, now,” Hatton said. “We know it feels to lose and I think that’ll give us extra motivation the next two years. I’m proud of all the seniors, and everybody played awesome. We just missed some opportunities.”

Upper Dublin awaits the winner of the Imhotep Charter-Whitehall game in the state semifinals, next weekend.