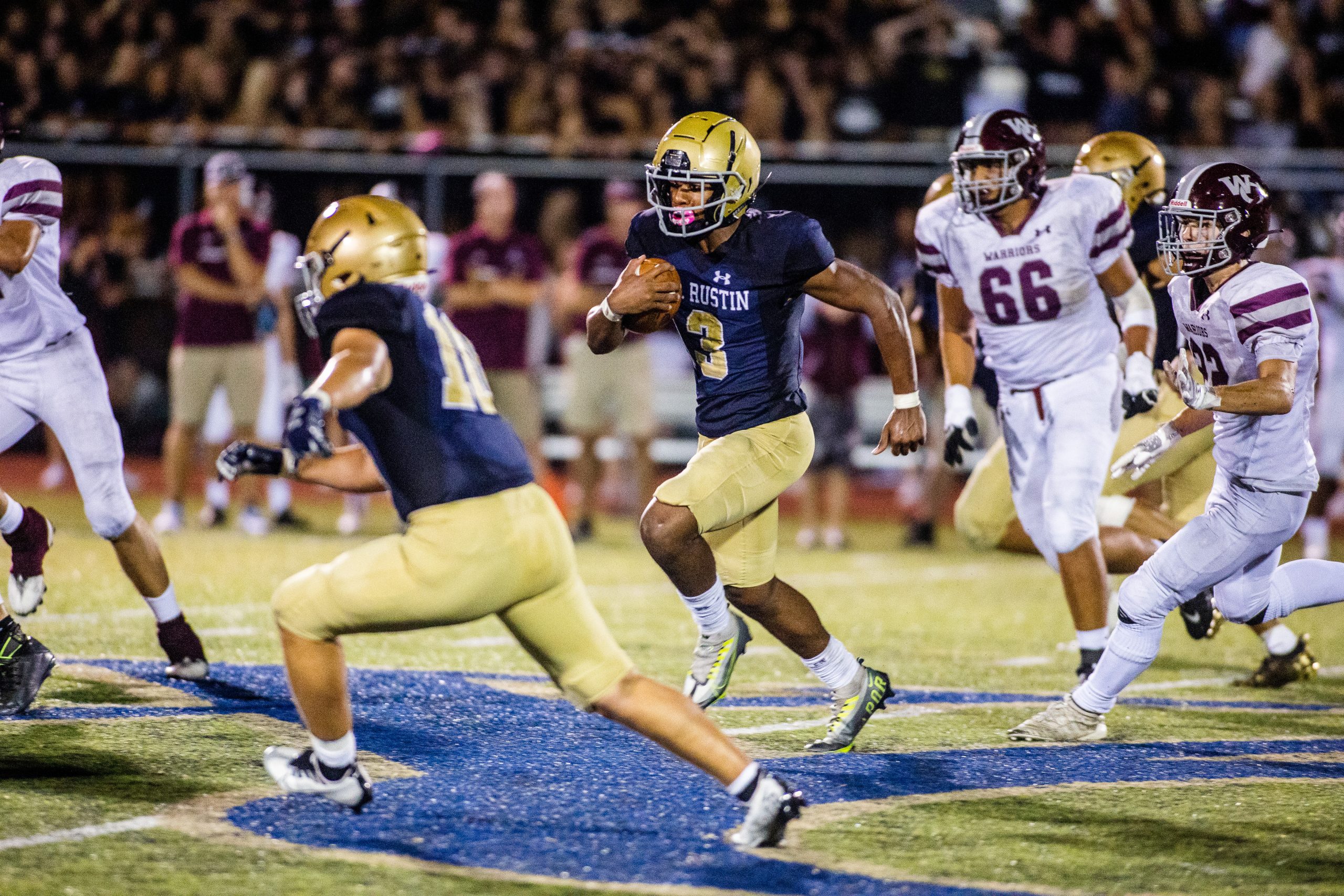 Many people feel high school football is the last truly pure sport there is. The sport has it all. Thrills, suspense, players playing not for money, but for the love of competition. Friday night the scene after West Chester Rustin defeated Strath-Haven in overtime the District 1 5A semifinal was one that showed how joyful the sport can be.

After Rustin scored in the first overtime period, the Panthers came right back and scored a touchdown of their own. But, after electing to go for the win and the two point conversion, the Panthers quarterback Sam Milligan fumbled the snap and the Golden Knights had a very big victory sending them to their third straight District 1 5A title game.

The Rustin sideline exploded with glee as the rushed the field and were followed by a sea of students and family, who poured out of the visitors stands. There were hugs and hand shakes and family pictures all around.

It was a spontaneous outpouring of emotion, joy and celebration for the entire Rustin football family. There were tears of joy among the family members and you could not find a Rustin player or coach that did not have a giant smile on their collective faces.

When you put so much into something and then see the fruits of your labor you will have scenes that transpired on the Strath-Haven field after the Golden Knights thrilling win.

This was a three month endeavor. no, football is now a 12 month a year undertaking with many hours of training, preparation and sacrificing. Those hot days in August and those countless hours in the weight room hope to lead to victories and moments like Friday night at Strath-Haven for the Rustin football family.

And family it is. The golden Knights, under their only head coach in history, Mike St.Clair, have always been a selfless, play for each other squad. No one stands ahead the other and they are truly in it for each other.

It is the only way in football you could reach the many lofty goals the golden knights have achieved over the years. The many Ches-Mont League titles, the playoff wins and a district championship, are only achieved by everybody rowing in the same direction.

There were many former Rustin football players who were celebrating on the Strath-haven field, a testament to the good experience they had as members of the Golden Knights football team.

St.Clair was mobbed by well wishers, former players and anyone connected to Rustin football. The outpouring of emotions were truly a sight to behold. This kind of celebration can only come when people have a sense of family, togetherness and love.

The Rustin football family has all of those and then some. Yes, high school football is truly a remarkable sport that brings people together if done the right way. At Rustin, they are living it day by day.