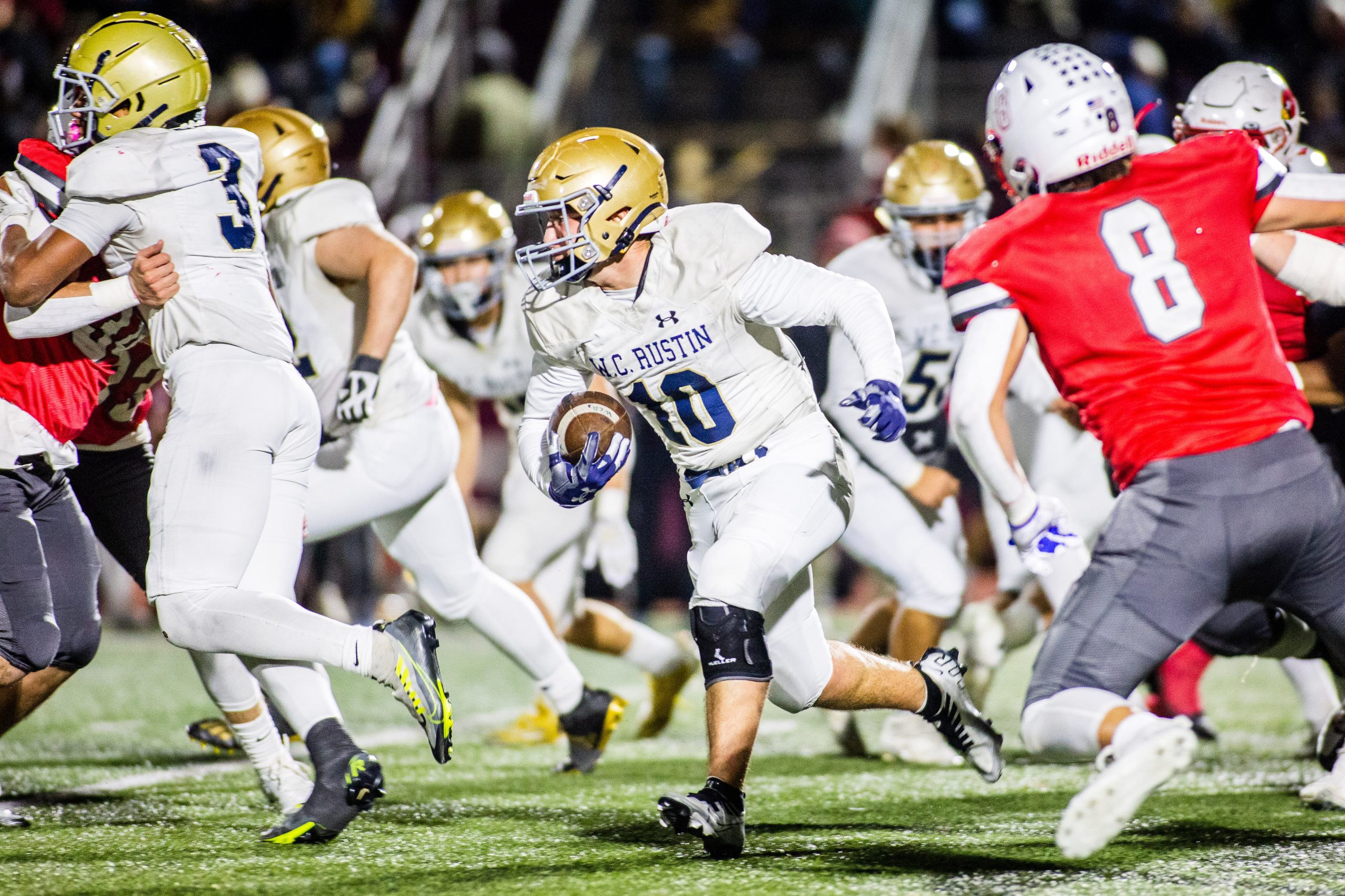 FORT WASHINGTON<< At West Chester Rustin they have a saying that the football team and its staff lives by. It is “Tradition Never Graduates.” And when this particular senior class graduates from Rustin they will leave quite an impressive legacy.

It was the third straight district title game this 2023 class of Rustin football players have been involoved in. Two years again the Golden Knights were downed 29-8 to Upper Dublin.

But to make three straight district championship games takes a special breed of football player and a dedication to the utmost by the Golden Knights staff.

There are many District 1 teams that have never played in a district championship game but at Rustin it is just business as usual to reach the lofty game.

Friday night the Golden Knights started out by committing two penalties before their first snap.

But things got rolling after that and the Golden Knights battled the undefeated and top ranked Cardinals tougher than any other District 1 team has all season. upper Dublin came into the title game by outscoring its three playoff opponents 100-0.

This class of seniors at Rustin is a small one. The Golden Knights roster shows only 13 seniors on this year’s team. So, the future is definitely bright for the Golden Knights as they attempt to build on the excellence that was this senior class.

“The coaches work us hard and they prepare us all the way from the summer to this point,” Rustin senior running back Damion Jacobs said after the bitter loss. “We want to keep the tradition going and I think this senior class kept their part of the bargain.”

After the loss Rustin head coach Mike St.Clair told his squad to keep their heads high because they have so much to be proud of. Numerous injuries at mid season would have derailed a lesser, less committed squad. But these Golden Knights dug down and went 11-1 up to this District 1 5A championship game.

“This senior class wanted to keep the tradition going,” St.Clair said. “They did everything we asked of them and more. They are a credit to their school and each other. They will be missed and I will miss them very much also.”

So, even though the Golden Knights fell short of a district title this year as they have the past two campaigns, this group of Golden Knights have raised the bar for all other Rustin football teams to follow.

This group of Golden Knights seniors showed talent, resolve and dedication. To qualify for three district title games in three years is one heck a legacy and one that will be remembered for years to come.

Yes indeed. Tradition never graduates. At Rustin, either does class, dogged determination and excellence. It is just what they do at Rustin and it should never be taken for granted.