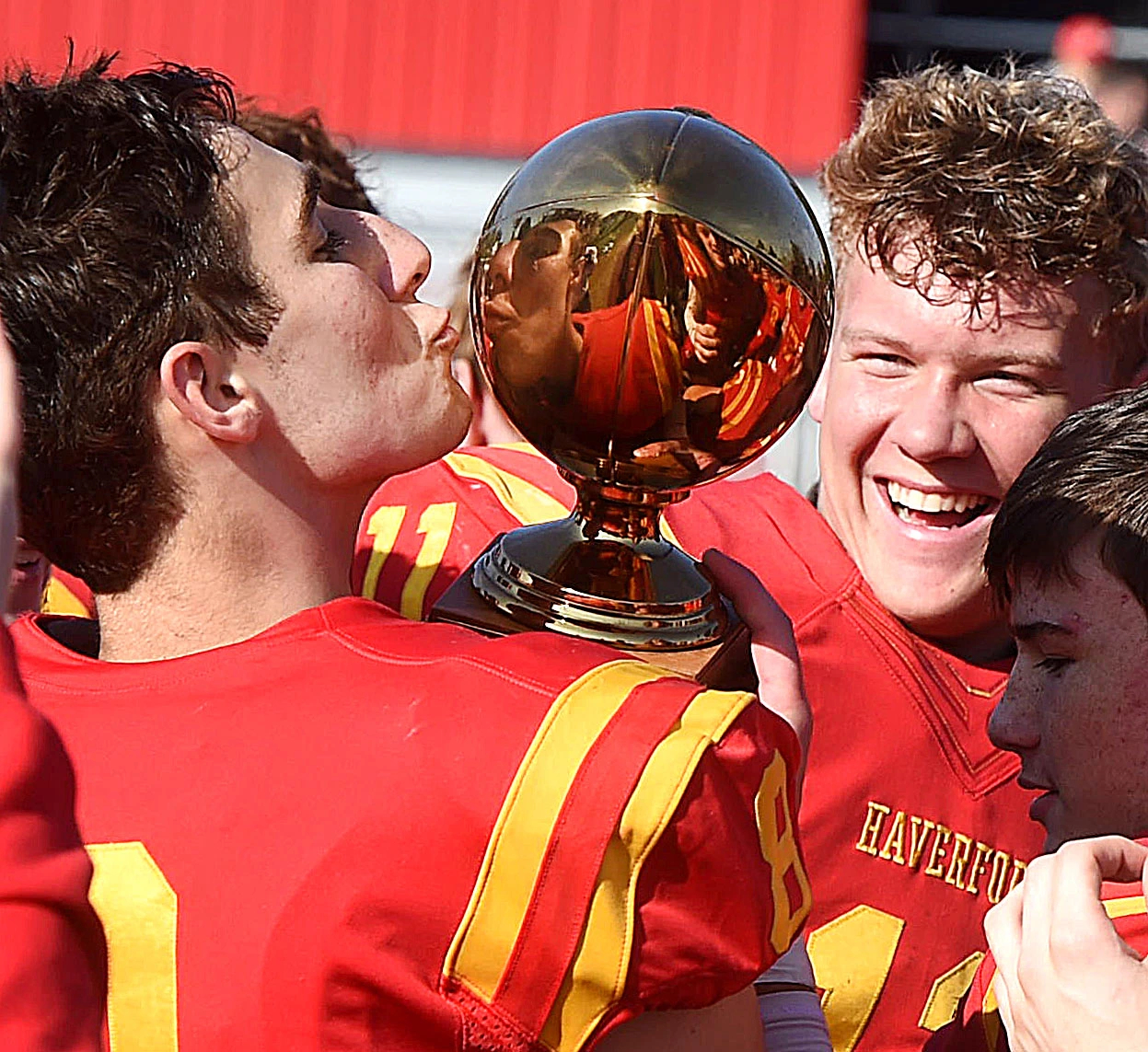 Wright and Touhill weren’t being disrespectful. They were on a mission.

As soon as Dougherty finished speaking, the two seniors reappeared to douse the Haverford coach with a Gatorade bath.

Wright didn’t want to break from that time-honored, postgame ritual, especially following the 100th Thanksgiving Day meeting between the Fords and the Royals, a game steeped in tradition.

“This is one of the best feelings ever,” Wright said. “Last year, unfortunately, we got skunked out of a win in this game so we really wanted it this year. We wanted to prove ourselves.”

Wright completed 7 of 15 passes for 197 yards and two TDs, a 65-yarder to Ethan Mahan and a 50-yarder to Tyler Rogers. Mahan caught three passes for 105 yards. He set the Haverford single-season (12) and career (22) records for receiving touchdowns. Wright also ran 13 times for 57 yards and a score. Wright was named the game’s offensive MVP.

Meanwhile, the Haverford defense held the Royals to 32 total yards in the first half and 14 for the game. The Fords had 10 tackles for loss, three by defensive end Chris Cassidy, and held Upper Darby to minus-3 yards rushing for the game.

“It was hard moving the ball against them,” said UD’s Montez Ellis, who managed 85 all-purpose yards in the first half. “We were hurting ourselves, beating ourselves, shooting ourselves in the foot and they took advantage of every opportunity that we gave them.”

The Fords may have been in the lead, but they weren’t resting on that advantage.

“We knew they were going to give us a fight, especially in the Turkey Bowl,” Wright said. “We knew that the game wasn’t close to over. That’s what we stressed.”

Defense and special teams enabled the Royals to make a game of it. Linebacker Kamar Perlote sacked Wright, stripped him of the football, picked it up and raced 41 yards to get the Royals on the board.

“I was just grateful to be put in that position to start my team up, stir them up,” said Perlote, who was selected as the defensive MVP.

Upper Darby’s defense kept the Fords in check, but it was special teams that got the Royals within one score. Junior defensive lineman Kaleel McLaughlin flew in and blocked a punt by Mahan with 8:49 to play in the fourth quarter. Nate O’Donnell muscled in from a yard out two plays later, and just like that it was 20-14 with 8:07 to play.

The comeback, though, was not to be. Upper Darby got a stop on Haverford’s next possession but could not capitalize. On first down, Haverford defensive back Ben Fleming picked off an O’Donnell pass intended for Ellis.

There was 4:51 on the clock, and the Royals never got the ball back. Offensive linemen Tommy Dixon, Burke Julian, Henry Gillespie, Touhill, Derek Kaercher, Will Cascarina and tight Justin Marciano enabled the Fords to run out the clock and clinch their 50th win in the series.

The celebration began with a little over two minutes to play when Cassidy hugged Wright and Rogers during a timeout and culminated when Wright and Touhill dumped a Gatorade bucket on Dougherty.

“It means the world to win this game,” said Mahan, who will play baseball at Rhode Island. “We had so many people come out and support us this year. After last year, this day was marked on our calendar forever.”