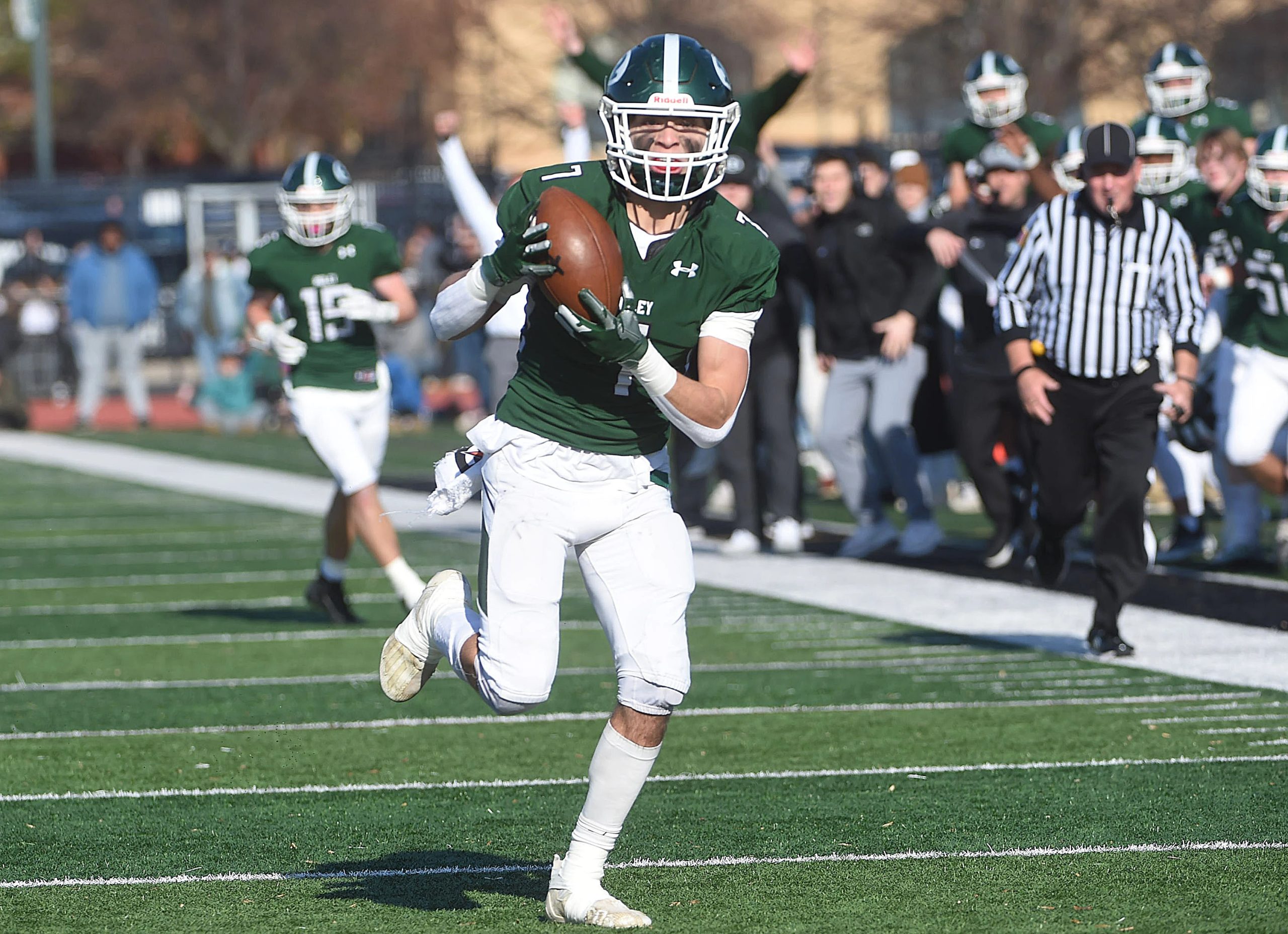 Ridley's Owen Bosak hauls in a touchdown pass in the first half. The Green Raiders broke the game open in the second half in route to a 47-7 victory on Thanksgiving. (PETE BANNAN-DAILY TIMES)

Bosak scored two touchdowns and eclipsed 1,000 yards rushing for the season to lead Ridley to a 47-7 victory over Interboro on Thanksgiving.

The 5-11, 180-pound running back/defensive back was one of several seniors who went out with a bang Thursday. Bosak’s TDs came on passes from sophomore quarterback Ryan Carroll, including a 34-yard connection that opened the scoring in the first quarter. In the third quarter, with the game tied 7-7, Carroll rolled out to his left and found Bosak in the flat for a six-yard score.

Interboro’s Dom Gunter, right, hauls in a 49-yard touchdown ahead of Ridley defensive back Kimir Stephenson in the first half Thursday. (PETE BANNAN-DAILY TIMES)

“With all the work that I’ve put in here the last four years,” Bosak said, “it feels good to know that I did something positive for the team and the community.”

Paul Jackson is another of those big-time senior weapons, the Green Raiders’ Swiss army knife. Jackson lined up out of the wildcat formation and scored from three yards out during Ridley’s 27-point explosion in the fourth quarter. He finished with 31 yards rushing and made three catches for 30 yards.

Stephen O’Donovan racked up 90 yards receiving on five receptions and played outstanding defense in the secondary.

“When everyone comes out for this game, the energy is insane,” O’Donovan said. “It’s like a playoff game and it means a lot for us and the community.”

“All around the community you heard people talking about this game,” O’Donovan said. “We knew we couldn’t lose no matter what.”

Ridley had three weeks off to prepare. Interboro had five days. The Bucs played two more PIAA playoff games than the Green Raiders. After winning the District 1 Class 4A title two weeks ago, the Bucs lost to Bonner & Prendergast in the first round of the state tourney last Saturday at Ridley. It was evident that Interboro had run out of juice in the second half Thursday. Ridley took advantage.

Ridley’s game plan was to stop senior Abu Kamara, who began the day with 2,802 yards rushing, a single-season Delco record. Kamara was bottled up to only 31 yards on 14 carries. He suffered a game-ending injury in the third quarter.

“We had to stack the box and have our linebackers play downhill,” Jackson said. “Every snap of the game we had to play downhill and win at the line of scrimmage.”

Ridley’s defense limited Interboro to less than 100 yards on the ground and forced five fumbles and an interception. Following the injury to Kamara, the Bucs leaned on senior fullback Theo Demopoulos, who had 77 yards on 14 carries.

Ridley quarterback Ryan Carroll throws a pass in the first half. The Green Raiders broke the game open in the second half in route to a 47-7 victory over Interboro. (PETE BANNAN-DAILY TIMES)

“It was really the same kind of plan that we used the last couple of weeks against Upper Darby, Conestoga and Marple. We did it in the playoff game against Spring-Ford, but we couldn’t put the extra guys in the box because of their RPO game,” Ridley coach Dave Wood said. “We were banged up like everybody else, but we went into a bowl mentality. We gave the kids three or four days off completely, then we had a couple of weight room days, and then in the last 10 days were probably our best practices. …

“I think it showed defensively today. It’s how we played down the stretch. When we needed those big wins at Conestoga, at Marple and here against Upper Darby, we played really good football.”

After the Green Raiders scored to take a 7-0 lead, the Bucs quickly answered when quarterback Julian Bulovas connected with wide receiver Dom Gunter on a 55-yard touchdown. Gunter made five catches for 118 yards. Bulovas completed 7 of 16 attempts for 149 yards.

It was all Ridley after halftime. Carroll threw his third and fourth TD passes to Khameen Powell, who ran a post route 49 yards to the house, and Nahaj Saleem, who hauled in a five-yard unguarded catch in the end zone. Alante Smith had a one-yard scoring run, and JP Lynam scooped up an Interboro fumble and sprinted 36 yards for Ridley’s final TD.

Carroll bounced back from throwing two interceptions in the first half. He completed 15 of 23 attempts for 273 yards and four TDs.